This article was originally published in December 2009 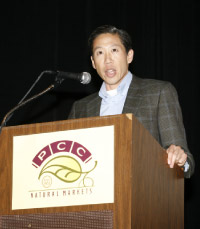 Board chair Stephen Tan welcoming members and guests with a report on behalf of the board. 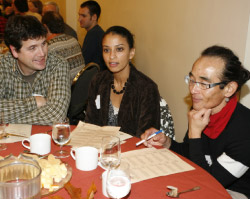 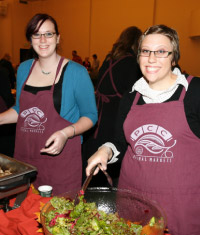 Emily Goodykoontz from West Seattle and Samantha Woolsey from Kirkland were two of the PCC store staff who happily served dinner to nearly 400 members and guests.

A delicious, fall meal was planned and executed by PCC staffers Blake Caldwell, Birgitte Antonsen, Alex George and Jill Edwards. (See menu and recipes.) Each dinner table was hosted by a member of the board or management.

Members reported interesting conversations sparked by a trivia contest on PCC accomplishments. See the quiz on the fall meeting page.

CEO Tracy Wolpert reported to members on a good three quarters of 2009 for our business. He noted that we have been impacted to a degree by the difficult economic conditions in this recession but will be close to even for the year, which is quite satisfying. Wolpert pointed to zero staff layoffs in 2009 and nearly $2 million returned to members in bonus discounts so far as two business highlights.

Kathryn Gardow, executive director of PCC Farmland Trust, updated members on trust activities, including a new challenge grant that will reap an extra $5 (up to $15,000) for each new donor.

Our keynote speaker, Jon Bansen of Organic Valley dairy cooperative, gave an inspiring presentation. Bansen talked about the reasons he moved to organic farming, citing the benefits for his cattle and consumers. “It’s all about the health of the cow,” he says. “It starts with healthy soil, and that relates to a healthy plant, and it just goes all the way up the food chain. If an animal is healthier, what they produce will be healthier.”

The board thanks everyone who helped make the meeting a success. Members who attended the meeting but did not complete the meeting evaluation form, or those who may have additional comments, may do so on our Web site.

A slide show, the menu and recipes, and a more detailed report are posted on the fall meeting page.

It is with great excitement and gratitude that PCC Farmland Trust announces the preservation of 100 acres in Pierce County. This property, Orting Valley Farms, has been our most complex and ambitious project to date and has involved the time and generous efforts of many project partners and concerned community members. Saving it is an accomplishment on many levels.

Insights by Goldie: Winter: time to shift to crucifers!

Many call them “brassicas” or “cole crops” (hence, “coleslaw”) and they include broccoli, cabbage, cauliflower, collards, and kale and all their kin — including mustard greens and some roots. What unites this nutritious family botanically is their similarly patterned flowers — four petals in the form of a cross; hence, crucifer, a “cross-bearer.”