This article was originally published in November 2009 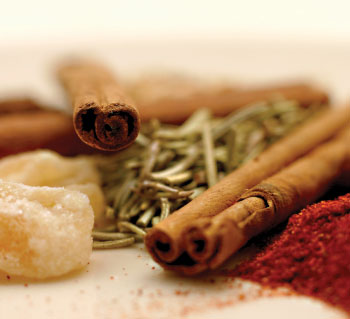 (November 2009) — A pinch of prevention is worth a pound of cure. Adding just a bit of the traditional holiday spices — cinnamon, cloves, nutmeg and ginger — can provide a bounty of health benefits, while seasoning your cooking.

According to the Center for Nutrition Policy and Promotion at the U.S. Department of Agriculture (USDA), there’s been an increase in the variety of spices available and in seasoning sales in the last decade. This increase reflects a trend toward the use of spices to compensate for lower salt and fat levels in foods, and also a more ethnically diverse population.

Spices also can impart healthful benefits. Just a pinch of the following four spices can help reduce inflammation, moderate cholesterol, improve digestion, and even calm the nausea from a turbulent flight over the holidays.

Cinnamon is the dried inner bark of a tropical evergreen tree. There are approximately 100 varieties of cinnamon, many of which come from Ceylon and China. PCC sells Indonesian cinnamon in bulk — in whole stick or ground form.

Recent studies in the peer-reviewed “American Journal of Clinical Nutrition” and “Diabetes Research and Clinical Practice” show cinnamon slows down emptying of the stomach, helping to moderate insulin and blood sugar levels. It also helps reduce triglycerides, LDL, and total cholesterol. Research headed by Dr. Richard Anderson of the USDA’s Human Nutrition Center is pinpointing the compounds in cinnamon that increase the body’s insulin sensitivity to glucose roughly twenty-fold.

Many oral healthcare products such as floss and toothpaste come in cinnamon flavors. The reason is not just taste but also cinnamon’s antimicrobial properties that retard the growth of bacteria and fungi.

Caution: The anti-clotting properties of cinnamon may cause excessive bleeding, especially in people taking blood-thinning medication, such as Coumadin, warfarin, aspirin and NSAIDS, such as ibuprofen.

Cloves are the dried, unopened, nail-shaped flower buds of an evergreen native to the Moluccas (Spice Islands). They’re dried until they turn brown and hard, and have a strong, pungent, sweet and spicy flavor.

Traditionally, clove extracts have been used to treat respiratory ailments and can be found in some sore throat sprays and mouthwashes, due to their antibacterial properties. Cloves also are known for their anti-inflammatory and antioxidant properties. A recent study showed that subjects who ingest cloves experience a drop in blood glucose, triglycerides and cholesterol levels.

Since ancient times, cloves have been used to treat digestive ailments. Cloves can kill intestinal parasites, plus they offer antimicrobial action against bacteria and fungi, supporting its traditional use as a treatment for diarrhea, intestinal worms and digestive problems. Plus, like many spices, cloves help relax the smooth muscle of the digestive tract.

Caution: Cloves may affect blood clotting so check with a doctor if you take anticoagulants. Cloves occasionally cause irritation of the skin and mucous membranes.

The nutmeg tree is a large, tropical evergreen native to the Moluccas that produces both mace and nutmeg. Nutmeg is the seed kernel inside a mottled yellow fruit. Whole nutmegs are oval, wrinkled, brown and approximately an inch long. They have a slightly sweet, nutty aroma and taste.

Nutmeg is used traditionally in many Italian and Greek dishes, though you may never notice it. Traditional macaroni and cheese also contains a bit of nutmeg and nutmeg is a standard flavoring for Scandinavian cookies, often paired with almonds.

Much of nutmeg’s flavor and aroma comes from volatile oils of myristica, which contains myristicin, a narcotic whose function in the plant is as a natural insecticide. Nutmeg — like cinnamon and cloves — also acts as an antibacterial agent.

Ingested in small doses, nutmeg can reduce flatulence and indigestion, and help treat diarrhea, vomiting and nausea. University of Michigan researcher Suzanna Zick, N.D., M.P.H., lists nutmeg as one of the spices useful in lowering blood pressure. It has been used traditionally as an aphrodisiac and recent studies on male mice show it benefits sexual activity.

Topically applied nutmeg is used as an analgesic, especially for rheumatism, mouth sores and toothaches. A 2007 study showed that nutmeg inhibits oral pathogens, which may explain nutmeg oil’s use for toothaches.

Caution: Be careful with nutmeg — the pinch used in cooking is fine, but large amounts, as little as two whole nutmegs, can be poisonous. Too much nutmeg can cause side effects such as hallucinations, nausea and shock, due to myristicin. A study in Texas over six years documented 17 emergency room calls with adverse symptoms from nutmeg overconsumption.

Nutmeg is a seed, not a nut, so it isn’t a risk to people with nut allergies.

Commonly referred to as ginger root, this spice actually comes from the plant’s rhizome, a knobby, horizontal stem that sends out roots. Depending on the variety, the flesh can be yellow, white or red and covered with a brownish skin.

Ginger has a warm, spicy, slightly citrus flavor that works well in savory and sweet dishes alike. It’s used by people who juice fresh fruits and vegetables to add extra zing, and it adds dimension to countless stir-fries and marinades. It’s essential in Indian, Thai, Chinese, Japanese and Indonesian cuisines.

Ginger offers numerous therapeutic benefits as well. Studies show that a particular enzyme in ginger known as zingibain has strong anti-inflammatory properties, making it very effective in relieving arthritis. Taken as a tea or in fresh or capsule form, even high doses reportedly do not have any side effects. Food prepared with ginger can give you a medicinal dose. Ginger also contains potassium, protease, oleoresins, starch, essential oils and protein.

Long used as a folk remedy for soothing the stomach, studies have confirmed ginger’s effectiveness. Researchers determined that ginger reduces nausea due to a strong antioxidant, gingerol, that blocks receptors in the stomach causing nausea.

Recent studies show ginger is useful in relieving morning sickness during pregnancy, in treating postoperative nausea, and is superior to dimenhydrinate (Dramamine) in reducing motion sickness. Results released at the May 2009 annual meeting of the American Society of Clinical Oncology showed ginger also significantly reduces the severity of nausea experienced by chemotherapy patients. Ginger is being studied for possible use against cancer cells, especially ovarian and colorectal cancers, and for its immune boosting action.

Fresh ginger is preferred over dried since it has superior flavor and higher levels of gingerol. Look for firm, smooth ginger that’s free of mold. No need to peel the skin; just grate it whole for use in recipes.

Caution: Adverse effects after consuming ginger are uncommon but may include heartburn, diarrhea and oral irritation.

“People really need to be aware that there are a lot of products that put in a synthetic form of ginger and hardly any real ginger,” says Zick. “So if you wanted the medicinal effect, you would have to make sure that the brand had actual ginger in it.”

Caution for all spices: More than 65 million pounds of spices, herbs and dry ingredients are irradiated each year. This can affect the health benefit of spices. For example, cinnamon experiences a significant decrease in vitamin C content with radiation. PCC never accepts for sale any irradiated spices (or other food products, for that matter).

Karen McGeorge Sanders has published more than 200 articles. When not writing, she’ll spend this holiday season cooking with spices, hoping for a healthy new year.

Accept the challenge! This Thanksgiving, Puget Sound Fresh, a program of King County and the local nonprofit, Cascade Harvest Coalition, are asking us to pledge to “eat at least one locally produced food.” It’s fun and easy ­— and a wonderful way to give thanks for the delicious bounty of our region.