by Diana Crane, Director of Sustainability

This article was originally published in July 2009

Used bicycles and bike parts — in any condition — will be accepted at two PCC drives this month. Please do not drop off bikes or equipment at other PCC locations or on other dates/times. 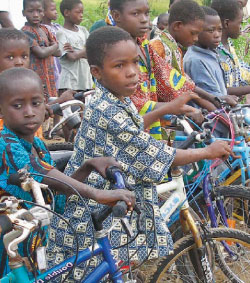 (July 2009) — This month PCC’s community relations department is sponsoring another Bicycles for Education drive. Our goal is to collect 900 bicycles and to help recruit 100 volunteers to prepare the bikes for shipment.

Learning to ride a bike and savoring that first taste of mobility and freedom, under our own power, is a right of passage few of us ever forget. Imagine how memorable a first bike ride is to an impoverished child for whom a bicycle means a better future.

For five years Bicycles for Education, a program of Olympia-based Alaffia Sustainable Skin Care, has organized the collection, transportation and distribution of used bicycles for the benefit of children in Togo, a small country in West Africa.

To date, 2,800 bicycles have been distributed to school-age children providing transportation between their villages and schools as far as 19 miles away.

Most Togolese children are able to complete their primary school educations but attendance drops off considerably in secondary school, especially in rural areas. Long walks to class, coupled with household chores, are physically demanding on children, especially girls. According to UNICEF surveys, in rural areas only 9 percent of girls aged 12 to 18 attend secondary school; 16 percent of boys do.

Alaffia’s founder and director, Olowo-n’djo Tchala, knows firsthand the challenges of overcoming poverty and illiteracy in his native Togo. He had the opportunity to come to the United States 10 years ago and although he spoke no English and had just a sixth grade education, he pushed himself to graduate from the University of California-Davis within five years.

In partnership with his wife, Rose Hyde, Tchala started producing all-natural shea butter skin care products under the name “Alaffia,” a Togo greeting. The shea butter is fairly traded and sourced from the Alaffia/Agbanga Shea Butter Women’s Cooperative in the Sokode community in Togo. The company has provided a consistent income to more than 200 families in the co-op, but Tchala’s support of his homeland has not stopped there.

He’s committed to promoting education, community empowerment and gender equality in Sokode and other African communities. At least 10 percent of Alaffia’s sales annually are devoted to projects that alleviate poverty in Africa, including Bicycles for Education.

With the help of volunteers and organizations such as PCC Natural Markets, Tchala arranges local bike collection drives, pays for the crating and shipping of bicycles to Africa, and navigates the considerable red-tape involved in gaining approval from the Togo government to off-load and distribute the bikes to deserving students.

Bike recipients are selected according to specific criteria, with priority given to girls, since they have less time to devote to travel to and from school. Secondary students complete an application noting their household income and distance from school. In addition to a bicycle, qualifying students are given a bike helmet and basic instruction on bicycle safety and maintenance.

PCC supported Bicycles for Education for the first time in January last year. A shipment of 1,600 bikes, collected through drives held by PCC and others in Portland, Olympia, Bainbridge Island and Seattle, was sent to Togo in July. For five months the bikes were held back by Togolese authorities but finally they were released to the joy and gratitude of the children and their families.

Tchala says the time and cost in surmounting the obstacles is worth it. In acknowledgement of the PCC collection drive he said, “Thanks to your donations, 1,600 more girls and boys have transportation to and from school and will no longer have to walk.

“Despite the difficulties that we had with the Togolese government and our increasing expenses in the current economic climate, I believe we must continue this project.” He added, “It is my firm belief that the support of our communities here in the Pacific Northwest will help my communities back home lift themselves out of poverty.”

Tchala’s work doesn’t end with delivering the bikes. He personally visits the communities where they have been distributed to make certain they’re being used as intended — to help young people get to school for an education.

You, too, can support this important work by recycling a bicycle you no longer need. One old bike diverted from a local landfill can help keep a child on the other side of the world in school.

PCC Natural Markets founded the PCC Farmland Trust in 1999 as a way to preserve threatened farmland in Washington and move it into organic production. While the Farmland Trust is an independent, community supported nonprofit organization, over the past decade, PCC Natural Markets — and its vendors and shoppers — have supported the trust in many important ways, allowing both the trust and the co-op to flourish as a result of the partnership.