This article was originally published in May 2009 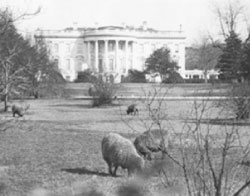 Sheep grazing on the White House lawn
(circa 1918).

(May 2009) — While it’s very exciting that Michelle Obama has planted an edible garden on the South Lawn, kitchen gardens are nothing new at the White House.

Eleanor Roosevelt started the trend in 1943, when she encouraged a return to the “liberty gardens” that helped alleviate food shortages and promote self-sufficiency during World War I.

The Victory Gardens program provided tools, instruction and sometimes even land for people to create personal gardens, and when Eleanor Roosevelt planted hers on the White House lawn, 20 million Americans followed her lead. By the end of World War II, Victory Gardens grew 40 percent of the nation’s vegetables.

Woodrow Wilson also sought to have the White House set an example for conservation efforts. During his presidency (1913-1921), he and Mrs. Wilson had “wheatless Mondays” and “meatless Tuesdays” and brought a flock of 18 sheep to graze the White House lawns in order to save the manpower required to mow.

Learn about the history of Victory Gardens and how to start your own at the following Web sites:

More recent presidents and their families also have shown a commitment to sustainable food. Walter Scheib, the White House chef from 1994-2005, served both the Clinton and G.W. Bush families. In a letter to the New York Times, Scheib said he sourced nearly all food from local growers and suppliers, and that there was a small garden on the roof of the White House where produce was grown (a request made by Hillary Clinton).

The G.W. Bush family had an organic kitchen policy; Laura Bush reportedly was “adamant” that organic ingredients be used whenever possible.

“The ethic of the purchasing and the cooking at the White House under my direction … [was] one of respect for the pedigree of the product and manner it is grown, gathered, raised or caught,” Scheib said. “The Clinton and Bush families dined regularly on organic foods.”

Obama’s fresh approach
Still, no White House family has taken fresh, local and organic food as seriously as the Obamas.

In March, Michelle Obama broke ground on a 1,100-foot organic garden on the South Lawn with the help of 26 elementary school students. She promised that her family — including the president — will help weed and harvest the crops.

Fifty-five fruits and vegetables are being grown, including staples such as onions, lettuce, spinach, broccoli, carrots, kale, peas and herbs, as well as blueberries, blackberries and raspberries. The garden even has two beehives to provide fresh honey.

Michelle Obama says she hopes the garden will educate kids about healthy foods, a topic that’s becoming an important part of her agenda as First Lady. As rates of obesity, diabetes and other diet-related diseases skyrocket, the garden is to be used “as a point of education, to talk about health and how delicious it is to eat fresh food, and how you can take that food and make it part of a healthy diet,” Mrs. Obama said in an interview with Oprah.

The crops are to be fertilized with compost, crab meal from the Chesapeake Bay, lime and green sand, and beneficial insects such as ladybugs and praying mantises will be used for pest control instead of synthetic pesticides. The total cost of seeds, mulch and other materials is $200 — proving that healthy food need not be prohibitively expensive.

The garden is not the only way the Obama family is supporting sustainable food. They served organic food and wine at a recent state dinner for U.S. governors, and Michelle Obama appointed associate White House chef Sam Kass as the new “food initiative coordinator.”

Kass, the Obama’s former personal chef who always has been an advocate of sustainable food, will help manage the garden and promote the connection between food and health. “The message is that food is really important with the health crisis we’re in,” Kass said. “Cooking is a big part of that.”

Beyond their own yard and kitchen, the Obama’s organic edict may be inspiring others here and abroad. At the G-20 summit they attended in London, sustainable food advocate and celebrity chef Jamie Oliver served a menu of local foods — including Welsh lamb and wild St. George mushrooms — to the world’s top leaders.

Please join us for the beginning of a year-long celebration of our 10th Anniversary at Bennington Place Farm on Saturday, June 27. We’re looking forward to feeling the full sun on our faces as we tour the farm and hear about how the Huesby family has been caring for their land sustainably for generations. Reservations begin May 11, 2009.

Animal ID does not address causes of disease or contamination