Animal ID does not address causes of disease or contamination

This article was originally published in May 2009 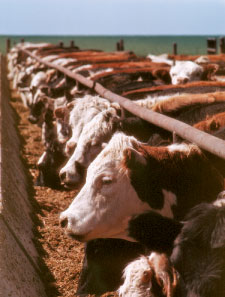 PCC has received a fair number of calls and emails from members expressing opposition to a proposed animal ID system. This article addresses the key issues.
— Editor

(May 2009) — We recognize that concerns about bird flu, mad cow disease, and recurring E. coli contaminations might make a proposed animal ID program seem like a good idea. After all, being able to trace the source of an outbreak is in most everyone’s interest. Any program also should help prevent costly, blanket recalls that hurt innocent producers while tracking down the guilty.

The USDA’s proposed National Animal Identification System (NAIS) would require everyone with any livestock to register their premises with an ID number recorded with the USDA. Eartags, implanted microchips or legbands would identify animals originating from that farm.

NAIS hurts small farmers
The trouble is that for the largest industrial-scale livestock operations, NAIS would mean business as usual. They could identify large numbers of confined animals up to the point of slaughter with one number. Thousands of cattle (hogs or chickens) in one immense feedlot would get a herd (or flock) number, not individual IDs. For such factory operations, the cost of NAIS would be negligible.

For smaller, diversified family farms that keep a variety of livestock out and about, each animal would be required to have an individual number. They’d also have to report to USDA every time an animal is moved from one pasture, corral or barn to another.

In practice, the cost of tracking thousands of animals through a factory system would cost the same as what one family farmer would have to pay for just one animal. Smaller ranchers very easily could be squeezed out of business.

The result would be that sustainably raised, healthier meat and dairy products from family farmers would become scarce if not disappear altogether. This would have a profound impact on PCC, since pastured and sustainably raised meats and dairy are at the core of the business.

It’s no surprise that agribusiness interests are promoting NAIS, hoping to create an image of enhanced food safety to mollify foreign markets that have refused to import U.S. beef. The purpose of NAIS is to enable a 48-hour traceback for mad cow disease so U.S. beef can meet international export rules.

In addition, the microchip implants being promoted as an ID method have been found to cause cancer. A 2007 report released by Consumers Against Supermarket Privacy Invasion and Numbering reviewed 11 studies researching the link between microchips and cancer. In nearly all the studies, malignant tumors arose at the site of the microchip implants and sometimes spread to other parts of the body.

NAIS also does not provide any new information. In Washington state and throughout the West, traceability of cattle already exists through current branding and vaccination programs. Washington state’s veterinarian, Dr. Leonard Eldridge, admits NAIS would not provide any new information that we don’t have already — but he supports animal ID. Eldridge also dismisses concerns about microchips causing tumors.

For these reasons, NAIS is neither a feasible nor sensible way to address disease and food safety problems.

Far better solutions would include stricter controls requiring inspections at the border; slower lines at slaughterhouses to allow for more careful inspections; and increased support for animal husbandry practices that emphasize animal health — such as pasturing, less crowded living conditions, and diets suited to the species.

PCC posted remarks about the proposed rule on USDA’s Web site during the public comment period. More than 8,000 comments are posted; fewer than 100 are in favor.

However, HR 1105, an omnibus spending bill already passed by Congress and signed by the president, includes $14.5 million for mandatory NAIS. Numerous legislators now say they didn’t know NAIS (or NAIS funding) was in that bill.

We support food traceability but NAIS does not provide traceability beyond the farm. It does not track food to the retail level. Senate bill 814 would (see letters, May 2009 Sound Consumer) but I’d bet the ranch that agribusiness will fight that one tooth and nail.

Mark Ellis has been raising Hereford cattle on his family ranch in Moses Lake, Wash. since 1972 and is a member of the Cattle Producers of Washington.

While it’s very exciting that Michelle Obama has planted an edible garden on the South Lawn, kitchen gardens are nothing new at the White House. Eleanor Roosevelt started the trend in 1943, when she encouraged a return to the “liberty gardens” that helped alleviate food shortages and promote self-sufficiency during World War I.

Vote now — PCC annual board election April 28 to May 22, Meet the candidates — virtually and in person, Notice of 2009 ballot counting meeting, and more