A rowdy year in agriculture

This article was originally published in March 2009 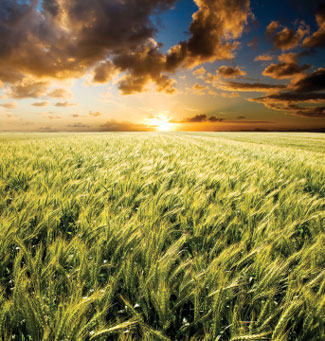 “… the paradigm for food production is changing and farming systems worldwide will have to chagne with it, or else be left behind.” – Stephen Bramwell

(March 2009) — Events related to food and farming, both organic and otherwise, have been somewhat astounding over the past year and a half.

From world food riots to frantic price fluctuations for fertilizers and bold language by leaders at home and abroad, the first decade of the 21st century is on its way to leaving an indelible mark.

Sustainable agriculture: an emerging consensus
In late August 2008, the extraordinary nature of this past year became clear at an organic agriculture conference in the Czech Republic.

Some of the better-known European researchers in organic agriculture spoke out forcefully for increased organic research and development efforts in the face of climate change, increasing energy costs, escalating food prices, and loss of biodiversity.

Francis Blake, president of the International Federation of Organic Agriculture Movements (IFOAM) European Union Group, noted that the paradigm for food production is changing and farming systems worldwide will have to change with it, or else be left behind.

Blake described a future where farms would be smaller and more diversified, machinery use would be reduced due to increasing operating costs, more labor would be necessary to tend more biologically complex farming systems, local markets would continue to expand, and food production increasingly would be regionalized because “transport will be too expensive to move things around the world.”

To advocates of sustainable regional food systems, such language is neither novel nor bold but the stuff of common sense. To me, however, as a recent graduate student familiar with the chaste and gallingly (if often necessarily) ambiguous language of scientific discourse, such an unabashed embrace of organic farming practices by research leaders is something of a revelation.

The occasion was even more momentous since it was followed by positive affirmations by government ministers of agriculture from Austria, Slovakia and other EU states.

One question this event raised was whether this suggested an exciting, emerging global consensus about sustainable agriculture.

On the one hand, EU countries in general have a jump over the United States in organic farming: organically certified farmland peaks in Austria at around 13 percent. In Washington state, only one-half of one percent of farmland is certified organic.

EU countries also, since the 1980s, have provided direct “green payments” to farmers to harmonize the private financial costs of ecological farming with the social benefits of clean water, less energy-intensive fertilizer use, and enhanced on-farm biodiversity.

In the United States, by comparison, the Department of Agriculture views organic food merely as a differentiated product in the marketplace. National Organic Standards have been used to help differentiate these products, as opposed to supporting actively their production.

On the other hand, calls for a major shift in the agricultural status quo spread much beyond Europe last year.

In April 2008, the United Nations published a report, the International Assessment of Agricultural Knowledge, Science and Technology for Development (IAASTD). Assembled by 400 researchers from around the world, the IAASTD report criticized multiple aspects of the current world food system, including a continuing failure to address food insecurity, unfair trade and intellectual property rights laws, corporate control of the seed and fertilizer industry, and the questionable capacity of genetically modified foods to address hunger issues.

Reminiscent of EU green payments, the report called for a new agricultural paradigm alert to the reality that farming, done well, provides much more than bushels per acre and balance of trade benefits.

The IAASTD referred to this reality as the “multifunctionality” of agriculture and proposed progressive policy options (including support for organic and regional production) that would favor food and farming systems that conserve resources, provide food safety, are socially equitable, and ensure regional food security. (For more, see February 2009 Sound Consumer, Global report advocates small-scale farming.)

Consensus by crisis
If the dialogue on sustainable agriculture reached new corners of the globe, adopted new tones of urgency, and gained influential new supporters in 2008, the capacity of crisis to impel change likely had something to do with it. Notable among these were food shortages, unprecedented price spikes for fuel and fertilizers, a crashing global economy, climate change-induced drought and flooding events, and food shortages around the world.

Particularly distressful were the food riots in Haiti, Mexico and numerous other countries. They effectively raised questions in the mainstream about the wisdom of a commodity food system that guts regional food security; all the more tragic since these questions have been asked by the sustainable agriculture community for a long time, but have never received enough political support to trump economic priorities.

Among the critiques was a September National Geographic story on rice production in Haiti. The article noted that Haitian rice imports increased from 18 thousand to 400 thousand tons over the last 28 years. Shortages in 2008, the article stated, were linked to a doubling in price for “Miami rice” — coupled with the preferential use of fertile land to grow export crops, such as mango, instead of rice for local consumption.

The world food crisis also exerted a surprising come-to-Jesus effect on former U.S. president Bill Clinton, who as president signed the North American Free Trade Agreement (NAFTA). Among other impacts, NAFTA flooded Mexican markets with subsidized U.S. corn, put thousands of Mexican farmers out of business, and almost certainly contributed to price volatility and food riots in 2008. At the UN World Food Day in October, Clinton responded to the tragic events of the past year.

“We blew it,” he said. “We [at the World Bank, International Monetary Fund, all the big foundations, all the governments] were wrong to believe that food was like some other product in international trade. We all have to go back to a more environmentally responsible, sustainable form of agriculture.”

Clinton also argued that the financial crisis “cannot be used as an excuse to avoid dealing with [the food crisis],” and that “we should go back to a policy of maximum agricultural self sufficiency.

“The food crisis, the energy crisis, and the financial crisis all point to what an interdependent world we live in and how we cannot escape each other’s fate,” he said.

From crisis to where?
One interesting feature of recent upheavals certainly is the almost lock-step volatility of fuel, fertilizer and food prices. The fact that the supply of an important feedstock for each of these (petroleum) is becoming tighter globally is no doubt central to their tandem spikes and crashes in price.

Although the reality of this synchrony is easily apparent, the impacts of these interconnections remain unclear.

One certainty is that energy volatility will continue to impact food prices due to impacts on farm finances from fertilizer prices, shipping costs, diversion of cropland to biofuel production, and export restrictions to protect domestic food markets when things go bad for various countries.

Much less clear is whether energy and financial crises will exert a positive or negative impact on the prospects for advancing sustainable food and farming agendas.

Chuck Benbrook, chief scientist at The Organic Center, a nonprofit research group, is doubtful that connections between the food and financial crises can be parlayed into aggressive progress in sustainable agriculture, but is hopeful that the average citizen may glean important lessons.

“I wonder whether people might begin to wonder if our food system is as vulnerable as our financial system,” he said. “I think that in some ways it is, [but] for the foreseeable future, the economic crisis and the need to get the economy going is going to trump a lot of other policy objectives.”

Regarding regulatory issues concerning both Wall Street and the food supply, Benbrook said, “The lesson I hope people take is to watch out for excessive confidence in the government. I do think that our food security is more vulnerable than we realize, but my guess is that the crisis we will deal with won’t be production and supply related, it will be quality and safety related.” (Editor’s note: Consider the reach and impact of the recent salmonella outbreak from peanuts!)

On a recent trip to the United Kingdom, Benbrook reflected on whether government regulations might be employed to good end, such as a carbon tax or direct payment incentives to encourage sustainable agriculture.

“For a lot of this stuff, the easy way to solve it is you just outlaw it, tax the heck out of it or regulate it. Europeans do a lot of that.”

The 2008 Farm Bill: kicking ourselves
An area where the tumultuous fuel, financial and food events of 2008 had an opportunity to impact agricultural regulations and policy was the 2008 Farm Bill.

Tracy Lerman is a policy researcher at the Organic Farming Research Foundation based in Santa Cruz, Calif. Asked whether she thought these events, on top of work by sustainable agriculture policy organizations, significantly impacted the outcome of the bill, Lerman had mixed feelings.

“The big picture is that big commodity agriculture still runs the show. Our wins are significant but incremental,” she said. “We did not shake the core.”

Lerman included among the important wins of the Farm Bill a quintupling of funding for the Organic Research Education Initiative from $15 million to $78 million for a four-year period; more opportunities for organic farmers to obtain benefits from the Conservation Security Program, a cost-share program for offsetting organic certification, and some payments for non-organic farms to convert to organic production.

The problem with the current economic climate, said Lerman, is that with the recession and an increase in food stamp recipients, sustainable agriculture programs are forced to compete with emergency food programs for funding.

Few people understand, she noted, that these emergency food programs constitute the largest portion of the Farm Bill, even trumping the notorious subsidy payments.

So, the two biggest payments of the 2008 Farm Bill once again will be subsidies for monocultures of commodities and emergency food support. As we reflect on the events of the past year and look forward to food, agriculture and energy issues in the years to come, hopefully the irony of this situation will be lost on fewer and fewer people.

Stephen Bramwell recently graduated from Washington State University with a master’s degree in soil science and now is searching for a job. He may be contacted at stephengbramwell@gmail.com.

Insights by Goldie: The pleasures of the seasonal plate

During the popular Walk, Talk and Taste tours given in PCC stores, we nutrition advisors frequently encourage eating mostly “seasonal” foods, especially produce. Shoppers often are confused about what the term “seasonal” actually means, however, and why it is important.

Beginning in June, take a farm tour on one of the trust's properties to learn about the land and the source of our food as the Farmland Trust celebrates its 10th birthday.

Notes from the Cellar: Everywhere