This article was originally published in July 2008

The ballots from the 2008 board election were counted in a public meeting on May 26 at the co-op office. The board thanks the volunteers who counted ballots. Here are the election results:

Board of Trustees
Buzz Hofford, 1,239
Carol Binder, 1,166
Julianne Lamsek, 1,067
Amy Pennington, 802
The top three candidates are elected to three-year terms on the board of trustees. 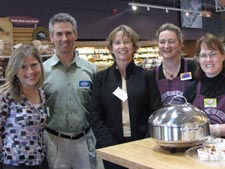 The gifts of local growers

For those who create their shopping list based on the availability of local organic produce, July is most notable for its steadiness and abundance. Four farm and the farmers who own them are profiled: Rent's Due Ranch, Nash’s Organic Produce, Full Circle Farm and River Valley Organics.

Notes from the Cellar: On the road (continued ...)

Patronizing certain local restaurants as well as local grocers is a great way to benefit local farmers. One of these restaurants, The Grange Café, deserves special notice because of its strong commitment to sourcing local organic foods from several PCC Farmland Trust farms.