The gifts of local growers

This article was originally published in July 2008 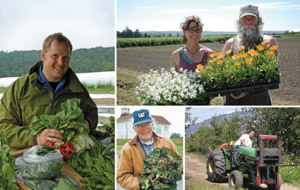 (July 2008) — For those who create their shopping list based on the availability of local organic produce, July is most notable for its steadiness and abundance.

The weather is consistently warmer and the ever-expanding bounty of produce from local farms makes eating locally an absolute pleasure. (How many blueberries can we eat in one day?)

It feels like a reunion in the produce department to see the tags from local farms — Rent’s Due Ranch, Nash’s Organic Produce, RiverValley Organics, Many Hands Blueberries, Full Circle Farm, Berryman Orchards and many others.

More than just suppliers, these farmers are like family. PCC has worked closely with some of them for decades. Shoppers recognize their pictures in the produce department and eagerly await some of their favorites, such as Nash’s Best carrots or Rent’s Due strawberries.

Having a face and a name to go with the produce that we bring home gives us a greater sense of connection. We know who to thank for the gift of good food grown with care and deep commitment.

Farming is recognized widely as a challenging profession. The hours are long and the days are often wet or scorching. The variables in play are many — the constant pressure of land development, fickle weather, the increasing costs of production, and irrigation issues, to name a few.

This year, many farmers on both sides of the mountains are three to six weeks behind schedule because of the cool and wet spring. But if you ask most farmers about their challenges, they tend to respond with an unflagging optimism and perseverance. Most have dedicated their lives to a love for the land and the very specific purpose of providing food.

Hopefully, their stories will add another dimension to your enjoyment of the flurry of fresh, local organic produce this year. 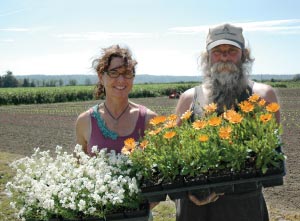 JoanE McIntyre and Michael Shriver of Rent’s Due Ranch in Stanwood, Wash.

Rent’s Due Ranch, Stanwood:
JoanE McIntyre and Michael Shriver
You may have seen JoanE McIntyre in the springtime whisking into the store with flats of every imaginable plant start — flower, herb, vegetable and fruit. JoanE is on the road more often than not, personally delivering the precious plant starts to PCC stores.

Less than an hour away at the end of a gravel road in the middle of farmland, JoanE McIntyre and Michael Shriver farm almost 50 acres under the name of Rent’s Due Ranch. They started growing in 1980 and have been selling produce through PCC since 1990.

Thinking back to the early days, JoanE notes, “We didn’t sit down and say, ‘We’re going to be farmers!’ It just evolved into this,” she laughs. “I remember saying, ‘Just 5 acres…’ and someone put a zero behind it. Who did that?”

Over the years they have expanded their list of available produce and have added 10 greenhouses for growing starts to transplant into the fields and to sell to city dwellers. During the summertime, however, JoanE and Mike’s field crops take center stage.

Most notable are the voluptuous leaf lettuces that resist fitting into a standard produce bag. This month, look for raspberries, leaf lettuce, green beans, beets, broccoli, cauliflower and zucchini from Rent’s Due Ranch. Later in the season, keep an eye out for garlic, potatoes, winter squash, onions (including Stanwood Sweets) and jack-o-lantern pumpkins.

Many of you may recall reading in April 2006 about Michael Shriver’s heart valve replacement surgery, which left JoanE and Mike with a heavy debt load. Like most family farmers, JoanE and Mike did not have reliable health insurance.

Sound Consumer readers stepped up to the plate and made donations to help them with medical bills. JoanE says, “It was a lot of support from a lot of people we didn’t know. If it wasn’t for the support of PCC shoppers, our financial situation would be dismal. You just don’t know how to say thank you enough. Because really, it was his life and that’s pretty amazing.” Thankfully, Mike is now in good health. 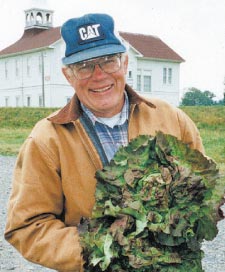 Nash Huber, recently named the 2008 “Steward of the Land” by the American Farmland Trust, and provider of fresh produce from Nash’s Organic Product in Sequim.

Nash’s Organic Produce, Sequim:
Nash Huber
One of the first certified organic farmers in Washington state, Nash Huber farms almost 400 acres on the beautiful Dungeness Spit on the Olympic Peninsula. But he doesn’t do it alone.

With 25 to 30 full time staff, Nash has focused a lot of energy on developing the next generation of farmers. Many have been part of his team for nearly a decade. “These young farmers are stepping up to take on some of the load,” says Nash, “and that’s really gratifying.”

Nash Huber is tireless in his efforts to preserve farmland. He leases the majority of the land he farms and is keenly aware of the tenuous nature of farmland conservation.

In 1999, he came to PCC with an urgent plan to save a nearby farm slated for development. This spurred creation of the non-profit PCC Farmland Trust and the purchase of the 97-acre Delta Farm in Sequim.

The farm is leased now to Nash and is a very active part of the operation, growing many organic row crops and raising certified organic pastured poultry and natural pork, which is sold closer to home on the peninsula.

Nash continues to work diligently to protect the precious and fertile farmland in his region, which is under intense pressure for development. This spring, he received the 2008 Steward of the Land Award from the American Farmland Trust. With inherent dedication, Nash vows to use the monetary award to highlight farmland conservation and preservation.

This month, when many farmers are done planting for the season, Nash and his crew will be hard at work seeding and transplanting their winter crops — Brussels sprouts, cabbage, leeks, cauliflower and kale to name a few.

As we near the close of 2008, we thankfully still will be able to look toward the Olympic Peninsula for a steady flow of local organic produce, including everyone’s favorite, Nash’s Best carrots, to carry us through the cold, wet months until we can stretch like seedlings towards the first of the local spring crops. 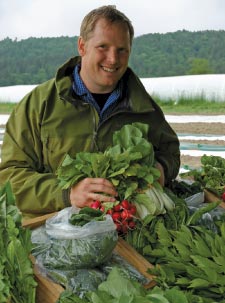 Full Circle Farm, Carnation:
Andrew Stout and Wendy Munroe
Full Circle Farm has been providing PCC with some of the earliest local spring produce for more than a decade. At PCC’s annual meeting in April, attendees dined on the first new local crop of mixed baby greens.

One of the most successful organic farms in King County, Full Circle Farm covers 260 acres, including 125 acres of the Ames Creek Farm, purchased from the PCC Farmland Trust in 2006.

Andrew Stout is focusing on making the farm a part of the larger community. Full Circle has developed a partnership with Children’s Hospital, providing local, seasonal organic produce to the food service kitchen, in addition to having a drop site for Full Circle’s Community Supported Agriculture (CSA) boxes.

Andrew also has put in many hours of political activism, lobbying for the 2008 Farm Bill and the state’s “Local Farms, Healthy Kids” bill, which was signed into law in March.

On the farm, Full Circle is developing the concept of “farm as place.” The staff is working with Stewardship Partners to develop an educational interpretive trail on the farm to educate the public about the benefits of organic agriculture and habitat restoration.

Corporate groups have been volunteering their time to restore habitat along Griffin Creek, and school groups regularly visit to learn about organic farming. This summer, PCC Cooks will be partnering with the farm for a farm tour and cooking class for young children.

Andrew adds, “Full Circle has put itself in the position to do the work and show it can be done.” Currently, his team is working with the Natural Resource Conservation Service to develop an innovative, covered compost area on the farm to combine their green chop with equestrian farm manure and spent grains from a local brewery.

This project has entailed the cooperation of farmers and county and federal agencies. “We’re showing that these entities can work together where there traditionally has not been a lot of success.” 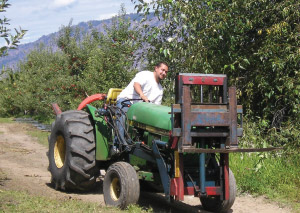 River Valley Organics, Tonasket:
George and Apple Otte
George and Apple Otte have found a true labor of love in their 18 acres of orchards in Tonasket, Wash. On this quiet land, they grow cherries, apples and pears, most of which are sold directly to PCC — about 250,000 pounds of fresh, local organic fruit.

Since they bought the orchards in 1997, the Otte family has become a part of the cycle of seasons there. They wake up in the middle of a cold spring night to take care of the cherry blossoms if and when the frost alarm goes off. They work from dawn till dusk with hardly time for a meal during the cherry harvest. Apple balances off-farm work as a teacher with the fall harvest of apples and pears.

“Having a family farm is really a place with roots, especially for the kids,” says Apple. “Although the children are grown, they all come home to help during the cherry harvest. They’ve all expressed an interest in being a part of the farm as much as they can.”

This month, PCC is blessed with fresh Lapin cherries from River Valley Organics. “It’s hard to fathom how crazy it gets during cherry harvest,” says Apple, “We get five or six hours of sleep at night and everything else is cherries.”

Their cherries are especially delectable. Unlike larger orchards, the Ottes go through their cherry trees several times during the three week marathon, picking only what seems optimally ripe.

In the fall, look for the Otte’s Seckel and Bosc pears and their Honeycrisp, Cameo, Gala and Fuji apples. “We love that we’re working outdoors and growing organic fruit,” adds Apple. “We can’t imagine any other way. It’s an important and honorable thing to do.”

Knowing there are dedicated farmers like the Ottes shepherding our local produce from flower to fruit makes it easy to appreciate the food before us. All that’s left is to prepare and eat it as mindfully as it was grown.

Alicia Lundquist Guy formerly served as co-executive director of the PCC Farmland Trust. She currently is an instructor in the PCC Cooks program and tends two young sprouting children, a flock of chickens and an urban vegetable garden with her husband George.

Editor’s note: If you’re one of the PCC staff or members who participated in a February bike drive for school children in Togo, here’s a letter passing on heartfelt thanks. If you missed the February bike drive, there’s still time to extend a helping hand — from our co-op to Alaffia’s co-op, halfway around the world.

Two significant developments involving our food system warrant a heads up this month. They involve 1) the U.S. government’s decision to stop tracking pesticide use on food crops, and 2) a surprising report on the industrial treatment of livestock.

Notes from the Cellar: On the road (continued ...)