Washington agriculture in a changing climate

This article was originally published in January 2008 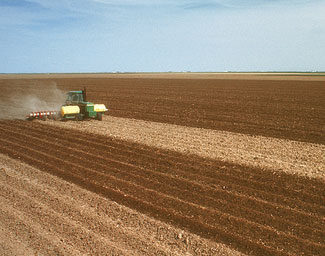 (January 2008) — Washington State is notching up its response to climate change, fueled by an increasing body of scientific studies and a rising number of floods and droughts.

A flurry of state planning is targeting issues that particularly will affect agriculture. They include new dams for the Columbia Basin; billion dollar price tags for recharging the Odessa aquifer in central Washington; policy recommendations soon to be published by Washington’s Climate Advisory Team; and a host of infrastructure challenges for dealing with more rain and less snow in the Cascade Mountains.

In the face of these volatile and challenging issues (few of which are widely or well understood), we have to ask whether we’re ready to respond to the impacts of climate change on farming.

In 2007, the International Panel on Climate Change (IPCC) published an unequivocal consensus regarding the impacts to be expected of a warming earth, noting the American West especially will be affected.

Increased temperatures (1.8 to 5.4º F higher), earlier peak river flow (one to four weeks earlier than in 1948), reduced summer river flow (as much as 25 percent in the Columbia Basin), and oceans warming to depths of 9,840 feet, will change our land and our relationship with it.

“In 50 years, life in the northwest is not going to be the same as it is today,” says Yoram Bauman, contributing author of “Impacts of Climate Change on Washington State’s Economy,” a statewide collaborative published by the Washington Department of Ecology in November 2006.

“This goes back to the overall status of the American West. We’re one of the global hot spots for climate change because we’re subject to some of the greatest extremes of drought and drenching.”

Farming outside Carnation, Wash., Erick Haakensen is familiar with the flooding capacity of the Snoqualmie River. Talking with me from his home, where November 2006 floodwaters were nine feet deep, Haakensen maintains that the 205 Project — a river-widening effort above Snoqualmie Falls — is responsible for sending more water, more quickly downstream into the Agricultural Production District (APD), where he farms.

Upstream residents see things differently. Snoqualmie Mayor Matt Larsen cites a hydrological modeling project that predicted the widening would raise the level of the river only 1 inch in the agricultural district.

According to Haakenson, however, a previous study had modeled a 12-inch rise in the agricultural valley, which raised alarm and inspired the second, milder report cited by Larsen.

Either way, the November 2006 flooding resulted in the declaration of a state of emergency in King County.

Responding to climate change
Despite conflicting explanations, the thing to know about climate change impacts on Washington agriculture is that the era of skepticism is over. More important still is that this shift in the debate from whether it’s happening to how to deal with it will usher in a difficult new time for decision-making, acting and financing.

While only a beginning, action is occurring in Washington and the five-state western region. In February 2007, the governors of California, Oregon, Arizona, Washington and New Mexico signed the Western Regional Climate Action Initiative.

Leading up to this, Gov. Christine Gregoire signed an executive order to develop the Washington Climate Change Challenge. This initiative spawned the Climate Advisory Team (CAT), a so-called who’s who of politics and industry in Washington according to Chad Kruger, a Washington State University BIOAg Educator for the Center for Sustaining Agriculture and Natural Resources.

Kruger, an expert on climate change and farming issues, finds his presence on the team something of a mystery. Other CAT members include state senators, the archbishop of Seattle, insurance commissioners, and representatives from British Petroleum, Boeing, Simplot, the Tulalip Indian tribe, Microsoft, Alcoa, Puget Sound Clean Air Agency, the Washington Environmental Council, Weyerhaeuser and others.

King County Executive Ron Sims predicted last fall that universities and businesses will see a huge infusion of money to finance climate change projects. When this happens, some fear that promising agricultural responses to climate change — which can be implemented on and benefit family farms — could be overshadowed by businesses promoting technical solutions that can be patented and marketed.

A regional food system: a cost effective response
Whether or not our state’s Climate Advisory Team is composed of well-placed business and political interests, the decision-making process for climate change responses is and will be open for public review.

For those in the food and agriculture communities, areas to pay particular attention to over the next few months will be seven recommendations, and a more controversial eighth, expected from the Agriculture Technical Working Group. This group will give the state’s Climate Advisory Team its agriculture-related policy recommendations.

The committee’s eighth recommendation, support for an integrated regional food system, was the last of 45 submitted to the CAT; the initial recommendation was opposed at the working group level by state food processors.

The recommendation to support a regional food system was saved, according to working group member and sponsor Tim Crosby (21 Acres Farm, Woodinville), when Climate Advisory Team members asked why a local food system response to climate change wasn’t included in the group’s recommendations. At that point the committee went back to work refining the recommendation.

Crosby says that potential GHG emission reductions with a regional food system fall in the range of benefits from other strategies proposed by the working group and that they may rival emissions reductions possible from energy and transportation proposals.

The resistance, he says, originates from lack of understanding. Much of that can be addressed by additional research in life cycle analyses of food production in Washington, an accounting of what’s produced in-state that could substitute for imported foods, and deeper collaboration with regional processors.

A forthcoming report from Sustainable Seattle finds that a 20 percent increase in regional food purchases would result in an additional half billion dollars circulating through the King County economy.

With the potential to boost the state economy, support Washington farmers, and combat global warming, regional food initiatives may be an increasingly attractive candidate for the investment funds identified by County Executive Sims.

Important issues
As Washington ramps up its response to climate change, some other important agricultural issues to keep an eye on include:

CARBON CAP AND TRADE AND/OR TAX.

CO2 is the primary greenhouse gas emitted from fossil fuel combustion and from soil organic matter during tillage and for growing annual crops such as wheat. For farmers, carbon accounting may mean a new source of revenue if the prices paid per ton of carbon conserved as organic matter are high enough.

Cap and trade, and/or a carbon tax would favor grass-legume forages, pastured meats, and no-till agriculture over intensive tillage. According to Mr. Sims, a carbon cap and trade program and possibly carbon taxes will be a reality for King County in the near future.

Expiration of conservation reserve program (CRP) contracts in the Palouse region of Washington, Idaho and Oregon.

CRP contracts pay farmers not to till erosion-prone land. Patrick Mazza notes that the $8 per bushel paid for wheat today looks much more attractive than the $2 price that wheat fetched when this land was enrolled in CRP contracts in the 1980s.

Converting CRP land back to annuals such as wheat would be a step backwards, according to Dave Huggins, USDA-ARS researcher in Pullman. The reason: tillage-induced combustion of organic matter contributed a greater share to global warming than fossil fuel combustion over 200 years of the Industrial Revolution between the 1750s and 1950s.

More rain and less snow will rob Washington farmers of critical water storage in the form of glaciers and snowpack. Proposed responses include:

Getting involved
All in all, the feeling one gets from the climate change literature and conversations is that our situation is perilous and will get worse if we don’t act soon.

In prioritizing responses, it’s logical that food security — particularly development of regional food systems — should be very near the top of our list of things to figure out. After all, as Bill McKibben says in his book, “Deep Economy,” “It’s nice to have microelectronics; it’s necessary to have lunch.”

A good New Year’s resolution would be to get involved in securing our regional food system. This could include seeking investment opportunities in this and the next generation of Washington family farmers; getting educated about how we can build up the Northwest’s food processing infrastructure, networks and capacity; and weighing in on the political process in matters such as flood control infrastructure, water storage and carbon taxes.

The road might be long, but starting is as easy as a Washington turnip. In other words, what we eat on the way to work …on the bus, of course.

Letters to the editor, January 2008

Board meeting report for November 27, 2007; Next board meeting; Talk to the board; and more