What’s the difference between pasteurized cheese and raw milk cheese?

This article was originally published in January 2008 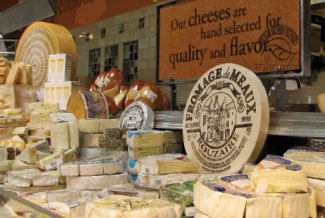 Farmstead cheeses are made from raw milk. The farmers milk their own herd; closeness to the source gives them control over the quality of their milk and cheese.

(January 2008) — Cheese is a natural food that links us to our past, our traditions. It is made from milk, the very source of life. Just how milk is processed during cheese making has become something of a controversy.

The current U.S. Food and Drug Administration law, in effect since just after World War II, stipulates that cheese made from raw milk must be aged for at least 60 days at 35º F or above before it can be released on the market.

This law makes the sale of authentic raw-milk Brie or Camembert, among other cheeses, illegal in the United States. The reason behind it is that dangerous bacteria, such as listeria, cannot survive in the environment past 60 days.

The process of renneting, salting and curing the cheese kills pathogenic bacteria. The idea that pasteurized milk no longer can be contaminated is absurd.

In cheese, good bacteria form a protective shield against potentially dangerous contaminants. This means that cheese made from pasteurized milk actually may be less safe then those made from raw milk! The good bacteria in raw-milk cheese protect the cheese from dangerous pathogens.

Raw milk is not dangerous if it’s kept clean. Most cheese lovers prefer cheese made from raw milk over a pasteurized version for the complexity of flavors provided. But everyone will agree that cheese made from milk that is clean (pasteurized or unpasteurized) is the most important factor of all and what matters the most in the process of cheese making.

Certain enzymes and bacteria will survive LTLH, which makes it preferable for cheese making. HTSH, on the other hand, kills all the enzymes and virtually all bacteria, so there’s nothing active left to turn milk into cheese.

Thermalization is another method used by cheese makers. It requires the milk to be heated at a very low temperature — approximately 150º F — for 15 seconds.

Raw or pasteurized?
Farmstead cheeses are made from raw milk. The farmers milk their own herd to produce some of the greatest cheese. The farmers’ closeness to the source gives them control over the quality of their milk and cheese. Unlike other producers, they will not mix the milk of an ill cow treated with antibiotics with the milk used to make cheese.

But these farmstead artisans can’t keep up with the increasing demand for superior cheeses. So cheeses are more and more made in large dairies or factories that collect milk from different farms, often called “pooled milk” here in the United States.

They have to pasteurize the milk since they cannot guarantee the cleanliness and quality of the milk. Therefore, the cheese they produce risks losing character.

Another reason why cheese makers started to pasteurize their milk is coming from the increasing consumer demand for consistency in cheeses throughout the year. Milk that has been pasteurized produces a cheese that stays more stable; each wheel per type of cheese offers consistent texture and flavors. By comparison, a raw-milk cheese is alive and constantly changing as it matures.

Here at PCC, we don’t select and buy cheese based on whether or not it is made from raw milk. For those of us who care about good food, the focus is more on quality, flavor, selection and the fact that our cheeses are free of artificial hormones and additives.

The choice for raw milk cheese or pasteurized cheese is up to the customer’s preference.

Sylvie Koester is from France with an extensive background and training in fine natural cheeses. She is the cheese specialist at PCC Issaquah.

Washington agriculture in a changing climate

Board meeting report for November 27, 2007; Next board meeting; Talk to the board; and more