Freedom of choice? The 2007 Farm (Food) Bill could offer real variety for consumers

This article was originally published in October 2007 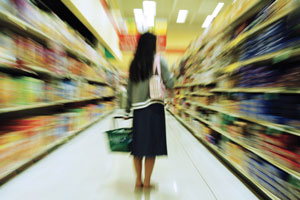 (October 2007) — If asked to use one word to describe the U.S. food system, my bet is that many Americans would say “choice.”

The aisles and aisles of products in most American supermarkets make our choices as consumers appear not only abundant compared to many other countries in the world, but practically limitless.

But do these supersized supermarkets and scores of new products within their big box walls really represent an expansion of choice in the marketplace? Let’s pull back the curtain and see what really is going on.

I submit that we should not conflate the sheer abundance of products with (1) a diversity of food companies in the market, (2) our welfare as consumers or (3) the notion that our food system is on a healthy path.

Yes, you may be able to choose from 20 different flavors of spaghetti sauce, but consumers’ power to choose what company they can buy from and what supermarket they shop in, or farmers’ choice of who they can sell to, has shrunk considerably in the last decade.

In the last several years there has been rapid market consolidation in the food processing, marketing and retailing sectors. There has been a “merger madness” in each link of the supply chain between farmers and consumers, with firms buying out or being bought out by competitors.

Analysts at The Oakland Institute have identified Wal-Mart’s rise to becoming the largest food retailer in the country as the most prominent catalyst behind this increasing consolidation.

To help people conceptualize the shrinking number of firms in each sector of the food supply chain, researchers offer the image of an hourglass. If one imagines one side of the hourglass representing producers and the other side consumers, the narrow midsection represents the small number of huge companies through which farm products pass between the farm gate and dinner plate.

In many cases so few firms control so much of the market today, their power meets the criteria economists use to qualify something as an oligopoly or oligopsony (essentially a monopoly of a few companies).

So why should we care that this is happening? Isn’t it a natural evolution of a capitalist system? A sign that some companies are more effective or more efficient than others? Besides, we have 45,000 items to choose from in the grocery store down the street — we’ve never had so much consumer choice.

It’s important to understand that this rise in market power is not the inevitable outcome of a free market; it’s the direct result of policies at the local, state and federal level that have used our taxpayer money to privilege the interests of large companies.

Also, while the oft-heard justification for this consolidation is that it results in greater efficiency and “low, low prices,” the truth is that the retail price for dairy, meat and produce has gone up while the farm value of these products has fallen.

So what can we do about this? There are some tools we can use to leverage a departure from the unhealthy and uncompetitive direction we have been heading.

At the federal level, the 2007 Farm Bill is a critical opportunity to create a Competition Title — a set of policies that would address the causes and impacts of market consolidation, specifically in the livestock and poultry sectors.

A Competition Title essentially would do three things: (1) diminish the power of the dominant food companies through steps that affect the structure of the industry, (2) increase the power of producers through collective bargaining, and (3) improve the enforcement of existing agricultural anti-trust laws.

In addition, support for the Farmers’ Market Promotion Program will direct federal money away from corporate welfare to real farmers supporting consumers with fresh, local foods.

There’s still time to demand measures in the 2007 Farm Bill that will take us closer to winning back freedom of choice and independence in the market.

For information on these policies and ways to get involved, visit the Sustainable Agriculture Coalition’s Farm Bill Action Center at sustainableagriculturecoalition.org.

Aimee Witteman is the grassroots organizing and outreach coordinator for the Sustainable Agriculture Coalition and a W.K. Kellogg Foundation Food and Society Policy Fellow.

­ Reprinted, with permission of the author, from Edible Portland, an award-winning publication of EcoTrust.