This article was originally published in October 2007 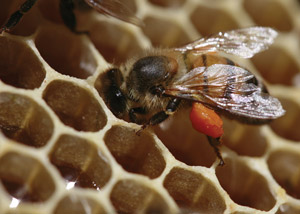 (October 2007) — After 80 million years on the planet, honeybees are disappearing — with more than 100 food crops riding precariously on their wings. In the past few decades, our primary pollinators have been plagued with increasing numbers of parasites and diseases.

Then last February, Colony Collapse Disorder took beekeepers by surprise and seemed to fly around the world as fast as an Internet virus.

As migratory beekeepers across the country were preparing to send their bees to California for almond pollination duties, they checked their hives and were shocked to discover only the queen and immature bees inside hive after hive. Old bees typically fly away from the hive when they’re ready to die, but Colony Collapse Disorder was a mass exodus and devastated bee colonies in 35 states.

Beekeepers in Spain, Portugal, Greece, Poland, Italy and Japan also were affected. Pests and predators that normally raid beehives for honey stayed away from the collapsed colonies. As fatalities grew, scientists scrambled to discover the cause.

Committees were formed, task forces created and miniscule evidence gathered. Scientists trotted out theories weekly, and intriguing versions of the vanishing bee story made headlines around the world. Cell phones, a fungus, a virus and global warming — all were considered suspects.

A few bee experts said Colony Collapse Disorder was nothing new. Formerly called disappearing disease, it was documented in 1869, 1923 and 1965. The reason bees flew away in the past never was determined. By June 2007, billions of bees had simply vanished.

These tiny-winged workhorses made the first apple harvests possible. Without bee pollination, apples are few and misshapen. In 1909, in New Jersey, the first bee colonies were rented for apple pollination.

Today honeybees are trucked thousands of miles, often in refrigerated trucks; forklifts move the hives from pallet to field, where bees are left to feed on just one type of nectar for weeks at a time.

Each February, commercial beekeepers across the country move their hives to almond groves in California where 80 percent of the world’s almond supply is produced.

Without honeybees, an acre of almond trees produces 40 pounds of almonds, but when bees are employed, the same acre generates up to 2,400 pounds.

In March, the bees are hauled to Washington for apple blossoms where half the country’s apples are produced. In April, bees may be moved to alfalfa fields and later trucked to vine crops, berries and vegetable seed crops.

Organically minded farmers and beekeepers believe that transporting billions of bees in refrigerated trucks for thousands of miles to pollinate vast landscapes of single crop fields weakens them as much as all that travel and only one food would weaken any living thing.

Pesticide plagues
“Colony Collapse Disorder is all about chemicals,” says beekeeper Todd Hardie from Honey Gardens Apiaries in Vermont. “Bees are the canary in the coal mine.” The loss of pollinators is a sign that agriculture is out of balance.

Bees and pesticides have collided in agricultural landscapes ever since both were employed by farmers. In 1881, a beekeeper accidentally killed his bees when he sprinkled an arsenic-based insecticide on a blooming plum tree. In the 1930s, copper-based pesticides and rotenone killed bees.

From the end of World War II until it was banned by the Environmental Protection Agency (EPA) in 1973, DDT inflicted honeybee casualties. Since then, pesticides related to DDT have been used as miticides to control mites inside the hive.

Most of the pesticides used today are chemically different than those applied in the past. Many are thought to be less toxic, but imidacloprid, an insecticide chemically related to nicotine, is classified as highly toxic to honeybees by the EPA. It impacts a bee’s ability to navigate, forage and create memories, and has been implicated in Colony Collapse Disorder.

Introduced in 1991, imidacloprid is one of the top selling products of Bayer CropScience and is marketed for use on more than 140 agricultural crops. It is sold under various brand names including Admire, Confidor, Merit and Goucho. A few years ago, Goucho was implicated in killing 70 percent of the bees in France.

Bees also suffer sublethal doses of pesticides from drift that settles on pollen. A protein food for bees, pollen is collected by workers and carried to the hive where it’s packed into cells for bees that emerge in the spring. Bees can eat stored pesticide-laden pollen a year after it was packed into a cell.

Bees also track tainted pollen into the hive where molecules of the pesticide ingredients change and accumulate in wax. Like heavy mold growth or deteriorating lead paint in a house, pesticide residues make a honeybee’s home a toxic environment. Certain genetic stocks of bees may develop resistance to a particular pesticide but product formulations change quickly and the bees wouldn’t be resistant to the next pesticide applied.

Mites, viruses and disease
One former honey beekeeper who now raises orchard mason bees says, “It was easy raising honeybees when I was young, in the 1940s. There weren’t any mites, and viruses weren’t a problem.”

Plagues of mites and viruses were on the horizon. The USDA was aware of coming problems and the U.S. Congress already had passed the Honeybee Act in 1922. This legislation stopped new honeybee stock from entering the country to prevent tracheal mites from devastating beehives.

In 1947, U.S. beekeepers boasted 5.9 million beehives, but by 2005, bee colonies were reduced to 2.4 million, a 60 percent reduction of bees. Most of the casualties occurred in the last few decades.

One reason is the varroa mite, a tiny blood-red parasite, that entered the country in 1987. Varroas hop from bee to bee, spreading viruses and sucking the life from bee colonies. In 2005, bee populations across the nation were devastated by varroas that had become resistant to pesticides developed to eradicate them.

As honeybees forage on ever larger mono-crop landscapes, mingling with bees from across the country, some carry mites and diseases. Bees continually touch, feed and groom each other.

If a bee contracts a virus or mites, the entire hive could be infected within 48 hours. Bees also drift, or enter neighboring hives. Drifting bees spread mites and diseases. Given the right conditions, diseases grow and kill bees quickly.

Three local beekeepers who lost bees offer their own explanations for Colony Collapse Disorder. The first says it has to be a virulent super-virus that has traveled from country to country and circled the globe. The second beekeeper claims imidacloprid killed bees by disrupting their navigational skills. The third beekeeper insists contaminated pollen from China is to blame, though researchers have not yet discovered whether the contaminant is a spore, fungus or other microbe.

“Pollen is fed to bees to make them grow brood,” he explains. “Beekeepers buy their queens and bees from breeders, and all bees purchased have been fed pollen.”

Bees and the pollen (that may be contaminated) are purchased from breeders when a beekeeper needs to replace lost bees — and many bee colonies have had to be replaced. In 1970 another bee disease called Chalkbrood arrived on pollen from Europe.

Various explanations for Colony Collapse Disorder seem possible, but there has been little emphasis on beekeepers who haven’t lost bees — or the farmers who have plenty of them. What they are doing differently is following organic methods of beekeeping and farming.

Sustainable solutions
On Hood Canal at Tahuya River Apiaries, Roy Nettlebeck keeps his beehives at 3,000 feet in the Olympic Mountains, away from agriculture. He raises varroa-resistant, super-hygienic Russian bees. Every spring, Nettlebeck’s bees sip an herbal mixture to boost their immune systems.

At Honey Gardens Apiaries in Vermont, Todd Hardie says, “We didn’t lose many bees this year because we’ve been using organic rearing methods. Each year our bees get stronger.” Hardie has been raising queen bees from feral honeybee survivor colonies. “If we find a colony in a barn, we pay special attention to it for breeding purposes.”

In Southeastern Nebraska at Bush Farms, Michael Bush says he has virtually eliminated varroa and tracheal mites from his bees by raising them in smaller, more natural-sized cells. (Bees grow as big as the cells in which the larvae develop.)

As bees grow, fewer mites can enter the small cells. Bush notes that the dying bees (from Colony Collapse Disorder) are a hyper-bred variety that breeders have forced into a larger-than-normal body size.

No one has documented how many feral honeybees and other pollinators are thriving on smaller, diversified organic farms, such as Growing Things in Carnation. There, Michaele Blakely’s crops lure diverse pollinators with a wide variety of blooms, even weeds that may grow thigh-high and bloom between Blakely’s crop rows.

In Stanwood, at Rent’s Due Ranch, JoanE McIntyre depends on neighboring bees to pollinate her cucumbers and berries. They haven’t let her down yet.

And in Bridgeport, at Rama Farms, Marilyn Lynn says she has an abundance of bees that pollinate six acres of apricots, peaches and nectarines. Lynn says, “There are more feral honeybees than people realize, at least in this state.”

So while scientists peer through microscopes and sift through microbes to understand Colony Collapse Disorder, organic beekeepers and small diverse organic farms — especially those farms near wildlife habitats — are living the solution and naturally boosting populations of pollinators.

These land and bee stewards have been doing things right all along. It’s time conventional farmers, the academic researchers and legislators paid attention.

Freedom of choice? The 2007 Farm (Food) Bill could offer real variety for consumers