Creating culture and health around the table

This article was originally published in December 2006 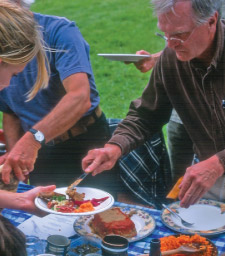 Celebrating good food as a way of life at the Real Food on the Farm workshop.

(December 2006) — Autumn on the farm is a feast and a celebration. The gathering chill and sharpening angle of the sun seem to persuade us, whether we like it or not, to slow down and lay on fat. With the coming of rain-cloud and soup season, we feel it is time to eat and give thanks for the food we have worked for.

Across Washington state, farmers and their communities are taking advantage of these feasting days to throw fall harvest festivals. Some are large and rowdy affairs; others are simple, harvest-inspired family dinners.

While farm food gatherings are no doubt distinguished by all manner of gastronomic preference and socio-political persuasion, they all serve an important service of bringing awareness to connections between earth, work, life and appetite.

At one time in this country, Sunday dinners and county Grange events may have served the same purpose. In the last 40 years, these traditions of sharing home-grown food with family and neighbors have given way largely to football tailgate (or Winnebago) shindigs and “family-style” dining.

Yet as small-scale family farming experiences its renaissance, the parallel rebirth of the farm food gathering reminds us that farming isn’t just about appropriate production and consumption, but also about celebration and tradition.

Celebrating the processes of preparing, preserving, cooking and eating food is coming to be seen as a means to sustain a shared culinary intelligence — in short, a culture of food — critical to the health of people, animals and landscapes.

Most community farm festivals I’ve been to embrace some general ideals, including a tendency to discuss the role of food, farms and limited natural resources in our lives. For instance, I recently had an opportunity to kick off the fall eating season with students who worked on the Washington State University organic farm. We gathered at the homestead (known, with some chagrin, as the second farm) of WSU organic farm manager Brad Jaeckel and ate up a storm of steamed artichoke, walnut-tomato balsamic rice, barbecued goat ribs and more. 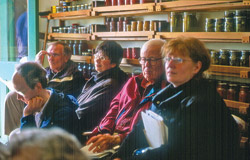 We feasted, enjoyed a farmy camaraderie and briefly dabbled in the kind of philosophical debate that only a sizzling, barbecued goat rib can inspire. A range of eating habits and views emerged — from squeamishness with eating a named goat and disagreement with eating animal products at all to relishing the healthful omega fatty-acids that lurked in the deep, juicy fat clinging to the pasture-raised rib.

To some, eating the goat was barbaric. To others it was an expression of continuous cycles of fertility. To all, it indicated a complex relationship between the land and human health.

Regardless of the positions taken, interest in the topic provoked personal reflections on a culture that otherwise keeps the process of getting food to the table out of sight and out of mind, ultimately to be presented as neat little packages at a store.

In this sense, lively food debates against the backdrop of a barn and setting sun may be more valuable than they first appear. Eventually they can inspire broader and better-informed discussions (or action) about the connections between agriculture and human health, biodiversity and energy consumption.

Farm food festivals are great opportunities for hearty eating, twangy music and celebration. They’re also reenergizing a participatory culture in Washington state that is capable of revitalizing not only food production but also eating habits and health.

The reason for this is that food is ultimately much more than what’s for dinner. Good food is a way of life, from the labor of digging potatoes to the joy of watching lamb games (spontaneous leaps and hops) on a spring evening.

On the community scale, the maturation of a participatory and local food culture is linked to closer producer-consumer connections, local purchases and on-farm entertainment.

One example among thousands is the relationship between Mark and Amy Ramsden, eastern Oregon/Washington ranchers, and their metropolitan buying club that meets annually at the Bainbridge Island harvest festival. People are drawn by their high-quality beef, as well as having a personal connection with the family responsible for it, which includes Mark and Amy, and their sons Lute, Jeb and Gus — all three, according to Mark, named after “good horses.” Mark and Amy’s customers are concerned about the quality of meat they receive as well as supporting a rural culture and sustainably productive countryside.

Whatever the occasion and wherever the location, food festivals in Washington are on the rise. If you haven’t had an opportunity to attend one yet, seek out a farm celebration near you. If not a barbecued goat rib, then maybe a hearty batch of oven-baked root vegetables or another dish will pique both your appetite and intellect.

Letters to the editor, December 2006