This article was originally published in May 2006 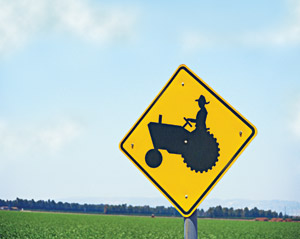 The concept of taking action to avoid potential harm — even in the face of scientific uncertainty — has gained considerable cachet.

(May 2006) — Imagine this: a chemical company plans to market a new pesticide. A committee is convened of local citizens, including farmers, consumers, healthcare practitioners, scientists, local businesses and government representatives, to analyze the alleged benefits and potential risks to the community.

After deliberation, the committee determines that in the absence of scientific data ensuring the safety of the pesticide — a compound similar to one already banned — the risks outweigh any potential benefits. The pesticide is not approved by authorities who recommend safer alternatives.

A far-fetched scenario? Perhaps not. The idea of precaution is not new. Ancient folk wisdom tells us “A stitch in time saves nine,” “Better safe than sorry,” and “Look before you leap.”

No doubt invention and taking chances always have been more popular — and far more exciting — than being cautious. But in an era when technological prowess turns small mistakes into far-reaching problems, a precautionary approach has begun to attract admirers.

In the last three decades, the concept of taking action to avoid potential harm — even in the face of scientific uncertainty — has gained considerable cachet among public health practitioners, environmentalists, farmers, scientists and most of all, citizen-consumers.

A Precautionary Principle Working Group was started in Seattle in 2004, and already, it has gotten precautionary principle language integrated into the city’s Comprehensive Plan, the section on environment. Next month, the first U.S. Conference on Precaution will be held in Baltimore to build the movement nationwide.

Why this blossoming popularity? Precaution makes all kinds of sense.

Forward planning
The modern legal concept of precaution grew out of the German word, “Vorsorge,” which means “fore-caring.” At the heart of the idea was the belief that a nation should try to avoid environmental damage by careful, forward planning, a process that would block potentially harmful activities. The Vorsorgeprinzip became, during the 1970s, a cornerstone of German environmental law, balanced with economic impact.

More than 20 years later, in January 1998, a group of activists, scholars, scientists and lawyers met in Racine, Wis., at Wingspread, home of the Johnson Foundation, to formulate a precautionary approach to everyday environmental and public health decision-making.

“When an activity raises threats of harm to human health or the environment, precautionary measures should be taken even if some cause-and-effect relationships are not fully established scientifically.”

This rather tame, cautious statement is nothing short of revolutionary. It completely upends our accepted system for dealing with potential toxins and environmentally harmful practices.

Our current system assumes that a substance or activity (such as spraying synthetic pesticides) is innocent until proven guilty. In other words, a company doing something that is potentially harmful to human health or the environment has the right to continue doing it until someone files a complaint or lawsuit and succeeds in proving the activity harmful.

This is a nasty problem. Because it’s impossible to prove harm until there is harm, the system cannot kick in until it’s too late — after the harm is done. Furthermore, the victim and the public bear the burden of proof rather than the proponent of the activity — the one who stands to profit from it.

The “burden of proof” is aptly named — it’s a heavy load. It means that the victims and/or the public must hire expensive attorneys to argue the matter, along with an assortment of scientists and experts to run tests and experiments — a prohibitively costly process.

Precaution advocate and attorney Carolyn Raffensperger points out, furthermore, that to satisfy scientific standards of proof, evidence must show with 95 percent accuracy that a particular substance or activity — and nothing else — was the cause of harm. In a world with 82,000 manmade substances, proving a single cause with that kind of accuracy often is beyond the capabilities of current technology.

In the past, scientific uncertainty has meant that proponents of an activity were free to go ahead with it. But under the Precautionary Principle, we acknowledge that we’ll never have perfect information, and as a result, we sometimes need to act before we have all the evidence we’d like.

The Precautionary Principle also acknowledges that deciding how to act, or not act, in the face of incomplete scientific evidence is not a question that science or industry can answer. It’s a judgment call, and for that reason, it belongs in the hands of the public. You and I, along with the neighbors, all have say in the decision.

Democratizing a process in which the public previously had little say is one of the most revolutionary changes of the Precautionary Principle. Instead of facing the simplistic, de-contextualized choices that industry currently offers (Which detergent would you prefer, the one with bleach or the one with the lemon scent?), we citizen-consumers would have a chance to consider complex priorities and tradeoffs.

Is cosmetically perfect fruit worth the environmental cost? Shall we devote a significant portion of our farm acreage to producing biofuels? At the expense of acres in food? If it means introducing genetically modified plants? Shall we require testing new industrial chemicals before they’re introduced into the environment, even if it has a chilling effect on the introduction of new chemicals?

If citizen panels or juries are given the chance to decide questions like these, their verdicts undoubtedly would have a precautionary flavor. That’s why the Precautionary Principle has plenty of enemies.

Opposition to precaution
Most of the opposition to precaution comes from economic interests and scientists. Julian Morris of London’s Institute of Economic Affairs, for example, is quoted as saying that “if someone had evaluated the risk of fire right after it was invented [sic], they may well have decided to eat their food raw.”

And Marlo Lewis Jr., a conservative public policy analyst speaking in defense of the Bush administration’s refusal to support the Kyoto climate change protocol, expressed a similar objection: “Inflating ‘Safety First!’ from a mere rule of thumb into a categorical imperative — an absolute overriding duty — is a recipe for paralysis and stagnation … Do the potential risks of climate change outweigh those of climate change policy? Or do we have more to fear from Kyoto than from climate change itself?”

These are serious charges. Would the Precautionary Principle discourage innovation to the point of paralysis and stagnation? A precautionary approach demands that we consider these objections seriously.

Seattle toxicologist Steven Gilbert, author of “A Small Dose of Toxicology: The Health Effects of Common Chemicals,” argues that we needn’t worry much about a precautionary approach causing economic paralysis and stagnation because we already have proof that it works just fine. Gilbert points to the example of the Food and Drug Administration (FDA) and its precautionary testing of pharmaceuticals.

“The FDA requires that a company submit data,” Gilbert says, “paid for by the company, demonstrating the efficacy and safety of the proposed product prior to approval.” That process may sometimes slow things up and does not always function smoothly, but it hasn’t caused paralysis or stagnation since the thriving pharmaceutical industry has been by far the most profitable U.S. industry for more than two decades.

Furthermore, at the FDA, the precautionary approach works fairly well at what it was designed to do: protect people from harmful pharmaceuticals. “Thalidomide,” Gilbert says, “is a classic example.” This drug was marketed widely in Europe and Australia, he says, as a sedative and anti-nausea drug for woman before it was discovered that it caused serious birth defects if taken at a certain time during pregnancy.

“But the drug was not marketed in the U.S., thanks to the FDA’s precautionary approach.” It seems that a woman in the FDA questioned the drug’s safety data and a great deal of harm was prevented.

Precaution in organics
Goldie Caughlan, nutrition education manager for PCC Natural Markets, argues that the organic foods industry provides an even better example of a successful marriage between precaution and economics.

“From the beginning, every aspect of the industry has been about precaution,” Caughlan says. “Precaution is why people wanted organic in the first place. They were seeking to get away from the perceived dangers of industrial agriculture. They wanted things to be natural. The organic foods movement was a citizen definition of precaution in action.”

As consumers adopt more healthful lifestyles, Caughlan says, they instinctively apply the precautionary approach. They look for fruits and vegetables grown without synthetic pesticides and that are not genetically modified. They want meats and dairy products from free-grazing animals not injected with antibiotics or growth hormones.

“Even though the pesticides, antibiotics and genetically engineered plants are approved by governmental agencies, health-conscious consumers increasingly avoid those worrisome substances and practices. They buy organic — as a precaution. Organic is seen as a safe harbor.”

So, in a world where perfection — the weed-free farm, the blemish-free apple, the giant strawberry — has begun to look more scary than beautiful, precaution is coming into its own. Even though it’s traditional — even conservative — the Precautionary Principle has a place at the organic supper table and is attracting new devotees to its common sense beauty.

Spirit of service and community thrive at PCC