The buzz that makes the world go round 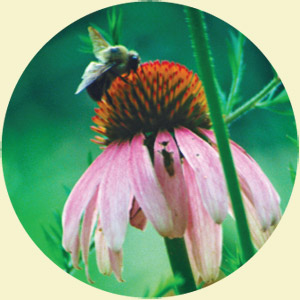 (April 2006) — Bees are like the salt in bread; you never really notice them until they’re missing. Albert Einstein put it bluntly, “No bees, no food for mankind. The bee is the basis for life on this earth.”

Ninety percent of flowering plants and 40 percent of the foods we eat depend on pollinators — mostly honeybees. They pollinate $15 billion worth of agriculture annually in our country.

The delicate dance between bees and blooms begins in Washington every spring in apple orchards as honey bees emerge from hives at the same temperature apple blossoms are ready to pollinate — 55 degrees. Skagit Valley apple grower Allan Merrit says, “The flowers have 24 to 48 hours to pollinate. Last year in Skagit Valley, the peak for blooms was April 15, but it rained through the week. Because honey bees can’t fly in the rain, our crop was at 33 percent.”

Floral shapes, fragrances, and a rainbow of colors lure pollinators like clever advertisements. Honey bees are the most common, although 400 bee species are in Washington state and 3,500 species exist nationwide. Some bees, such as Mason, Hornfaced, Alkali, Alfalfa Leafcutter and Bumblebees, are better pollinators than honey bees for certain flowers, but most farmers today don’t depend on alternative bees for abundant crops.

Hornfaced and Mason bees live alone in wood and forage for nectar in cool spring temperatures, which means they can pollinate early-blooming fruit trees. Hornfaced bees have pollinated apple orchards in Japan since the 1930s, and Mason bees are popular with gardeners worldwide. But raising either to pollinate large orchards here hasn’t reached honey bee-keeping levels.

Evolving together like a long-term marriage, the first pollinators were wingless insects. The oldest bee fossil is 80 million years old.

Early Egyptians kept honey bees for a variety of purposes, transporting them in wicker basket beehives on barges up and down the Nile. Hives carried from field to field assured pollination.

Farmers’ produce was collected and redistributed with jars of honey for each household.

Merrit says, “Commercial growers don’t use Mason bees. The bees need to be moved out after pollination because even organic sprays can be harsh.”

East of the Cascades, PCC apple grower Scott Leach relies on honey bees for his apples. “On the trees, there are four flowers and their bloom is staggered,” he says. Honey bees pollinate later blooms if early weather isn’t favorable. Mother Nature gives them another chance.”

Another crop in eastern Washington, seed alfalfa, produces our country’s most valuable feed crop for livestock. Complex alfalfa blooms must be “unhinged” to release pollen. Honey bees can’t do this. Alkali and Alfalfa Leafcutters can; they’re skilled artisans on alfalfa flowers.

But Alkali bees live alone underground and their nests take a year to establish, so they can’t be moved and are easily damaged. Alfalfa Leafcutters live in wood (they arrived as stowaways on a ship from Europe in the 1930s). Also, Alkali and Alfalfa Leafcutters won’t fly as far as honey bees.

With 400 million flowers per acre of alfalfa, on hundreds of acres, each blooming for just two weeks, these two bee varieties can’t do the job alone. Honey bees are recruited. Massive numbers of bees insures greater crop yields.

Another underrated pollinator for many plants, including alfalfa, is the Bumblebee. Small colonies live underground. With a heavier body mass, Bumblebees can fly in rain, fog or cool weather. On flowers where the anther and pollen are deep inside, a Bumblebee flies in and buzzes. Pollen shoots out and covers her before she flies to the next bloom. Bumblebees also work in greenhouses where honey bees can’t navigate easily.

But honey bees have a long-standing contract with agriculture. Since ancient Egyptian times, colonies of these little migrant workers have been transported to blooming crops. Modern beekeepers rent and ship beehives by truck to growers around the country beginning with the February almond harvest in California and ending in the cranberry bogs of Massachusetts in the fall.

Pesticides, habitat destruction, lack of continuous seasonal flowers, inbreeding, degraded environments and weakened resistance to parasites have wiped out bees worldwide. Ninety percent of the wild bees are gone — most lost since the 1950s.

Products from the hive

Beehive commodities are a rich source of properties supporting both bees and humans. Honey is a high-energy food for people and bees.

Bees create a surplus to see them through the winter. Raw honey has more than 75 compounds including enzymes, vitamins and minerals.

Honey has antibiotic and anti-inflammatory properties and is useful externally on wounds and burns. Bees combine honey with pollen to feed their young.

Propolis is an antiviral and antibiotic substance manufactured by bees from certain tree resins like poplar or conifer.

Wax and propolis cover the inside of the hive creating a hygienic environment. Royal jelly is a protein and vitamin-rich food, manufactured by bees and fed to the queen.

Products from the beehive — honey, pollen, propolis, royal jelly and bee venom have been used medicinally since ancient Egypt.

Apitherapy employs these for alternative healing. “Taken together, each enhances the others with a synergistic effect,” says McWiggins.

Bee venom can trigger an allergic reaction, but venom also contains anti-inflammatory components; one is a hundred times more powerful than hydrocortisone.

“Beekeepers have lower rates of arthritis than any segment of the population,” says McWiggins.

Bees never develop immunity to pesticides. Even at sub-lethal doses, chemicals accumulate to toxic levels in the hive causing bees to lose navigational skills. Todd Hardie from Honey Gardens Apiaries in Vermont says, “The issue is people, our lifestyles, what we do on earth.”

Honeybees are so sensitive that if they pick up something toxic such as chemical pesticides when collecting pollen, they’ll die before getting home. In a healthy environment, bees can fend off mites and viruses. Bees are an indicator species. There are reports from Spain, Canada, California and Florida that bees are dying because the water, air and environment are so degraded.

Last year 60 percent of the honey bees left were killed by varroa mites, a tiny parasite that arrived here just over a decade ago. Small miticide strips, placed inside the hive, kill the mites. But in 10 years, varroas developed resistance to the first, second and third chemicals created to eradicate them. Pesticide-resistant varroas multiplied and spread, leaving dead bees in their wake.

No bees, no food
Consider the almond harvest in California, where 80 percent of the world’s almonds are harvested annually. To produce one almond, each blossom is pollinated more than once. Up to five beehives per acre are required, 1.2 million hives in all.

Almond farmers rent all available beehives in California, plus 80 percent of the hives around the country. In February, convoys of trucks from 38 states, wind their way to the almond groves. Last year, growers frantically requested more beehives for pollination, getting some from as far away as Australia. Because of reduced honey bees worldwide, they were 250,000 hives short.

The industrial, chemical-driven farming system weakens the bees that fuel it. It’s time to think outside the hive and consider a sustainable solution. “Bees are like the canary in the coal mine,” says Hardie. “They’re an indicator of the health of the planet.”

Caring for the hive
Dedicated beekeepers like Hardie and Roy Nettlebeck from Tahuya River Apiaries on Bainbridge Island are raising mite-resistant honey bees to rebuild weakened colonies. These bees from Eastern Russia survived varroa attacks. They’re obsessive clean-freaks that constantly groom each other and keep their hives meticulously clean. They throw the mites out. 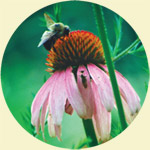 At Dungeness Organic Farm in Sequim, flowering crops, wildflowers and weeds naturally provide blooms from spring through fall. Wild and cultivated bees are invited to dine on the finest nectar throughout the season. Farm manager Scott Chiechester says, “We promote a diverse landscape and have many non-crop plants. We also keep some Mason bees for fruit trees.”

In eastern Washington, alfalfa farmers encourage Alkali bees to take up residence by donating one acre for bee nesting for each 200 planted acres. Uncultivated ground also helps stabilize Bumblebees, who live with only a few days’ supply of stored food. Nettlebeck says, “Last year, when so many honey bees died, there were more Bumblebees foraging.”

We can help feed and save the bees in our own yards. First, don’t use pesticides or herbicides. If neighbors do, ask them to apply their chemicals at night when bees aren’t active. Let your lawn grow so the clover and dandelions will bloom, plant flowering trees and flowers that bloom spring, summer and fall, and maintain Mason bees.

When we support organic farms, we sustain ecosystems that increase bee populations. From apples to watermelon, food for farm animals and health products from the hive, the sweet hum of bees feeds our lives.

UPDATE A study published in August 2009 in the Proceedings of the National Academy of Sciences found that there may not be a single pathogen involved in Colony Collapse Disorder, but a collection of culprits: viruses, fungi, pesticides, varroa mites and other factors. Read expert perspectives on what this means.