Nourishing the life of soil

This article was originally published in March 2006 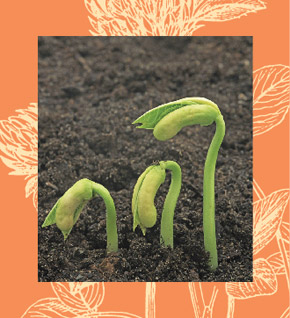 It is my hope that as more of us become aware of life beneath our feet and its relevance to our well-being, we will be inclined to work together to maintain the biological integrity of the underground and preserve some of what we find there for future generations.
— David Wolfe, “Tales from the Underground: A Natural History of Subterranean Life”

(March 2006) — As short winter days stretch into spring, we remember that there is life beneath our feet, under the patio stones, under the grass, and in the soil. A single teaspoon of cured compost contains up to six billion microbial life forms — almost as many people as there are on the earth.

If you think about the number of teaspoons of cured compost in your average garden, this makes for a lot of life. Microbial life, including bacteria, fungi, algae and protozoa are small but formidable critters working for our benefit.

There are at least 6,000 different kinds of microbes in soil. Microbe diversity is essential for soil health, as these tiny organisms provide the checks and balances that keep disease and parasites from becoming a threat to plant health. Fungi, for example, control nematode and insect populations. Many fungi also produce antibiotics that keep plants healthy. Bacteria kill harmful insects, while protozoa and mites feed on harmful fungi and bacteria.

The interconnected network of microbial life is only the beginning. Good soil also makes a comfortable home for earthworms, termites, ants, beetles, moles, rabbits, snakes, badgers and other small animals. These insects and animals digest and irrigate the soil and make it more able to support healthy plant life. Healthy, disease-free plants are less of a target for insects and other pests.

The importance of good soil was known by farmers, scientists and gardeners as far back as the 17th century. Charles Darwin wrote a treatise about the importance of earthworms back in the 1800s.

The dirt on soil and the cost of non-organic farming


Fertilizer (whether chemical or organic) is added to soil because cultivated plants use up the naturally existing humus and then are harvested before decomposing back into the soil.

Chemical fertilizers, however, are designed as an end product and do not promote the diversity and dynamics of microbial cycles. Pesticides kill the very organisms that keep healthy soil functioning.

One recent study in India revealed that an initial increase in agricultural productivity through use of chemical fertilizers lasted only two to three growing seasons.

With the natural balances and counterbalances of plant and soil systems destroyed, more chemicals were required to produce less.

Once a farm has been under intensive chemical cultivation for 10 or more years, earthworms and other soil builders are killed off and cannot survive in the soil.

This is where sustainable agriculture, no-till cultivation, organic and small-scale gardening come in, a new age of resource responsibility and pollution prevention.

The cost of chemical farming

Joanne Wilke lives, writes and gardens in Bozeman, Mont., with her two children and various critters.

Only after World War II, when inexpensive fertilizers, larger farm equipment and cheap irrigation became widely available, did many people forget or ignore the importance of maintaining healthy soil. We no longer looked at soil as an interrelated system but as individual, unrelated components.

Industrial-age logic held that problems arising in soil could be fixed by increasing external inputs: soil that lacked a particular nutrient got fertilized; soil incapable of storing rainfall was irrigated; compacted soil was torn open or plowed;diseased plants were sprayed with pesticides.

For a while, this approach appeared promising. Increased mechanization and technology allowed farmers to work more acreage and produce abundant, affordable food. Only more recently have the costs of such practices begun to show in the form of massive degradation of soil, chemical run-off leaching into the groundwater, antibiotics entering the food chain, and massive erosion. Medium- and small-sized farms have been run out of business as giant superfarms and agribusiness gain control of food production from seed to shelf.

Chemical farming today asks very little of the soil it uses. Essentially, sterilized soil holds the plants vertical and chemical fertilizers provide the nutrients, much like an IV drip. Microbes are sometimes added to soil, but mostly only varieties known to enhance a specific crop. The soil we once knew as a life-enhancing fabric that supports all life forms appears to be in need of life support.

What we’ve forgotten is that soil, in its complex entirety, should be seen as a living, breathing organism. Healthy soil is a three-dimensional fabric of organic matter and microbes that produces food and shelter for all life forms on earth, including humans. In the words of Kenny Ausabel, founder of Bioneers, “Life is intimately interconnected, and as a culture we’ve made a basic systems error to believe that we exist somehow separate from nature, or from one another.”

Globally, it takes the earth an average of 500 years to build a single inch of farmable soil. About 6 inches of farmable soil is needed to grow food, which takes about 3,000 years to produce. Simplistically, that means the earth started building our soil back in 1,000 B.C., when chariots were racing through Rome.

For every pound of non-organically grown food eaten, about 6 pounds of farmable soil are lost due to wind and erosion as the result of the agricultural practices involved. With each person eating an average of 2,000 pounds of food each year, the United States loses an average of 12,000 pounds, or 6 tons, of soil per person per year.

The consequence is that our soil is being depleted approximately 18 times faster on average than nature can build it. The situation is worse in developing countries. In China, for example, 18 pounds of farmable soil are lost per pound of food eaten. Feeding a billion plus people means that China loses approximately an inch of farmable soil every seven years.

If such practices continue, we may face food shortages of enormous proportions. John Jeavons, director of Ecology Action in Willets, Calif., paints a dire picture. “It has been estimated,” he says, “that by 2014 about 90 percent of the world’s humans will be living in developing countries.

“In those countries, there will be an estimated 4,500 square feet of farmable soil available for producing food per person, assuming (optimistically) that about half the farmable soil will be left in nature to sustain plant and animal diversity.

“A person living on a vegan diet, which requires the smallest amount of land, with foods grown using U.S. agricultural technology would require 7,000 square feet of farmable land to survive for a year.”

Avoiding this crisis requires a change in thinking and acting. It requires strong family planning programs and education, both proven methods of slowing population growth. Farming practices must also change, and change quickly. 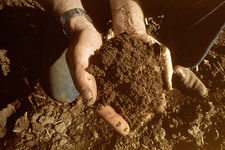 Ancient farming methods that actually build soil are being resurrected. Such methods, including Grow Biointensive farming pioneered by Jeavons, focus on small-scale, organic, biologically intensive methods of farming that work with, rather than against, nature.

Such methods have the capacity to use 30 to 99 percent less energy per pound of food produced compared with industrial practices; 50 to 100 percent fewer purchased nutrients (in the form of organic fertilizers); and 67 to 88 percent less water by helping “drought-proof” the soil.

If implemented correctly, Grow Biointensive farming claims it actually can build up to 20 pounds of farmable soil per pound of food eaten.

Local farms such as Rent’s Due, Nash’s Organic Produce and Full Circle Farm have focused on increasing organic matter in the soil by selecting crops that suit the climate, promoting healthy plants to prevent major pest damage, and cultivating a variety of crops to provide habitat for beneficial insects. The farms also rotate crops to balance soil nutrients and plant cover crops to minimize nutrient loss and maximize nitrogen.

Michael Ableman, director of the Center for Urban Agriculture in Goleta, Calif., calls soil the starting point for restoration. “No matter what the situation is, in most cases the soil needs to be seen as a world unto its own.

“Part of our job as farmers is to recreate a soil environment that is well-balanced, whole and just packed with life. We depend on it for our living and our production. All too often, even under the best of conditions, we are mining it, even when we think we’re doing a good job.”

Organic food production is a good example of our good intentions. Even though it is much less intensive than non-organic farming, on average, organic farming still results in a net loss of soil per pound of food eaten.

Ultimately, we need to give soil back to the earth. The organic and sustainable food movements have put us back on the right track, and innovative farmers are finding ingenious ways of reversing the loss of healthy soils. As the ground warms, take a look at the soil in your own backyard and learn more about the life that lives within it.

Future generations depend on our efforts to learn more about soil and change our relationship with it so that it thrives. In the words of John Malcom, Vermont dairy farmer, “the microscopic flora and fauna in our soils give soil its fertility, otherwise it’s just dirt.”

Heidi Lasher was born and raised on Puget Sound and was a PCC shopper before moving to Bozeman, Mont. where she now writes, skis, shovels snow and reads stories to her baby girl.

A county policy for locally grown, Omega-3s for kids, Kraft phases out GMOs in China, and more