The surprising truth about saturated fats

This article was originally published in February 2006 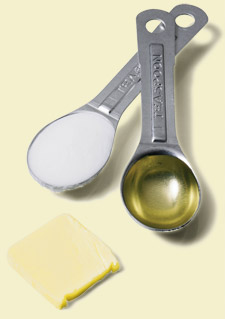 (February 2006) — Saturated fats always were considered a healthy part of human nutrition until the mid-1900s. The experts declared “fats are good” and even recommended them for treating serious medical conditions such as tuberculosis and epilepsy.

Then suddenly, after World War II, we were told just the opposite — to cut fat, especially saturated fat, if we wanted to maintain healthy weight and prevent heart disease. Marketers of low-fat foods championed this concept in the media. Few people questioned why foods eaten for centuries suddenly were blamed for causing heart disease.

But drastically reducing saturated fats from the modern diet has not solved our health problems. Obesity is at an all-time high as is heart disease, cancer, diabetes and stroke. The doctrine of low-fat eating has lost credibility.

In fact, quality saturated fats are important for good health. It’s time to revisit what changed in the American diet and precipitated a sudden rise in heart disease.

Some suggested that cholesterol was the problem. Much of the hypothesis was based on a study examining arterial plaques in American soldiers who had died during the Korean War. High levels of cholesterol were found and some researchers started looking at cholesterol in foods such as meat, shellfish, cheese, eggs and butter as a possible cause.

When it comes to animal fats, it’s still wise to consume them in small amounts.
People have eaten small portions of animal products throughout history or have eaten them primarily on special occasions, due to scarcity. A portion as big as a deck of cards is all that’s recommended. Historically, a plant-based diet has been dominant for most people in most cultures. Organic vegetables are still the best choice for the bulk of our diet.

Use virgin coconut oil for cooking and as a spread.
Because coconut oil doesn’t have molecular bonds that can be broken easily, it won’t oxidize (turn rancid) easily, which makes it very desirable for cooking. It makes a great spread on toast. It tastes great on popcorn and is one of the healthiest oils you can choose for popping.

Coconut oil is made of medium chain triglycerides, which researchers at McGill University discovered use up energy when they are metabolized and act as weight loss agents.

Coconut oil also has “thermogenic effects,” meaning it raises body temperature, boosting energy and metabolic rate. It has no cholesterol and has not been shown to raise LDL (bad) cholesterol levels and many people have reported it has raised their HDL (the good cholesterol).

Use extra-virgin olive oil for salad dressings and cold foods.
Olive oil is known for its heart-protective properties. Be aware that monounsaturated fats, such as those found in olives and nuts, will put on weight. Use them sparingly.

Avoid polyunsaturated oils such as corn, soy, safflower and sunflower.
These oils typically are used for cooking and are found commonly in snack foods, salad dressings, mayonnaise and fried foods. They oxidize easily because the unpaired electrons located at the molecular bonds make them highly reactive.

When they’re subjected to heat or oxygen, as in extraction, processing and cooking, free radicals form. Free radicals are implicated in heart disease and cancer.

Polyunsaturated oils easily turn to trans-fatty acids when processed and heated to high temperatures. They must be heavily refined and then hydrogenated to become a solid fat such as margarine, which is loaded with toxic trans-fatty acids.

Many studies show that these oils lead to modern diseases, such as heart disease, that were not common among people eating traditional diets.

Was the hypothesis true? A number of heart disease studies that followed indicated differently. The Anti-Coronary Club Project, launched in 1957 and published in 1966 in the Journal of the American Medical Association, compared two groups of New York businessmen 49 to 59 years old.

One group followed a “Prudent Diet” with corn oil and margarine instead of butter, cold cereal rather than eggs, and chicken and fish instead of beef. A control group ate eggs for breakfast and meat three times per day.

In 1965 The British Medical Journal published another study that involved patients who already had heart attacks. One group consumed corn oil, another group olive oil, and the third group ate saturated animal fats. After two years, the corn oil group had 30 percent lower cholesterol, but only 52 percent remained alive. The olive oil group fared better with 57 percent alive. But in the group that ate saturated animal fats, 75 percent still were alive.

The truths pointed out by these studies largely were ignored by the mainstream and the anti-fat theory prevailed, disregarding the beneficial role that saturated fats play in health and that population studies did not support the theory.

The role of saturated fats
Quality saturated fats have many important roles in body chemistry. They are essential to good health.

A study conducted at the Wynn Institute for Metabolic Research in London examined the composition of human aortic plaques. This study found that the artery-clogging fats in those who died from heart disease were composed of 26 percent saturated fat and 74 percent polyunsaturated fatty acids.

They determined no association with saturated fats, but rather implicated polyunsaturated fatty acids — such as those found in corn, soy, safflower and sunflower oils — as the primary contributors to aortic plaque formation. They suggested that current recommendations caution people to avoid these oils completely.

The American Heart Association has discovered that people with heart disease all have one thing in common — inflammation. So, research today is focused on the following contributors to heart disease: (1) inflammation, (2) oils high in omega-6 fatty acids (polyunsaturated oils), which promote inflammation, (3) damaged fats — particularly trans-fats found in margarine, snack foods and fried foods, (4) blood clots, (5) high blood pressure, and (6) high levels of homocysteine, an amino acid in the blood. The facts of history also seem to have played a role, directly or indirectly.

Historic changes and heart disease
When the Japanese occupied most of the Philippines and the South Pacific during World War II, supplies of coconut oil were cut off for several years. Before then, coconut oil was used for cooking and in most snack foods. Americans were forced to turn to alternative sources of cooking oils, and polyunsaturates became the popular choice of the day.

After the war, butter consumption declined while the use of vegetable oils — especially oils that had been hardened to resemble butter by a process called hydrogenation — increased dramatically.

The seed oil industry has spent millions convincing Americans their products are better. The medical community also may be reluctant to admit it’s been wrong.

Summary
Saturated fats have a long history of use in traditional cultures because they’re stable fats that do not oxidize easily and turn rancid. Numerous studies have not implicated them in heart disease.

Numerous studies, however, have implicated refined polyunsaturated vegetable oils and trans fats, which many Americans consume daily. Polyunsaturated oils are particularly unstable and oxidize easily. Oxidized oils are toxic and can cause widespread free-radical damage, which is implicated in heart disease and cancer.

Vegetable- and seed-based oils have been around for less than 100 years and their rise in popularity in the 1950s parallel a drastic increase in heart disease. Heart disease took a giant leap after World War II — that’s irrefutable. What changed was the type of fats we consume.

Reducing saturated fats from our diet has not solved our health problems. Traditional, quality saturates such as ghee, unbleached, virgin coconut oil and grass-fed dairy and meat may be more important than the conventional wisdom allows.

Cherie Calbom, M.S., is the author of 15 books including best sellers “The Coconut Diet” and “Juicing for Life.” Cherie earned a masters degree in nutrition from Bastyr University, where she now serves on the Board of Regents.

Letters to the editor, February 2006

Microwaved food, Access to pasture, For the anonymous customer, and more

Water fight, Not all donuts are equal, Wine world in ferment, and more

Chocolate and the taint of child slavery