This article was originally published in December 2005 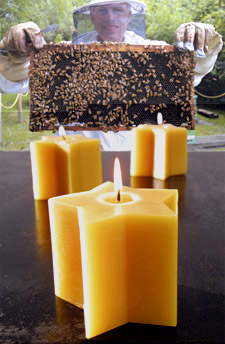 Beeswax is a renewable resource, unlike the petroleum base in common paraffin candles.

(December 2005) — The pallets are stacked to eye level with rectangles of beeswax casting a warm, golden glow and aroma around the workroom. Each rectangle is a pound of beeswax, representing the work of one honeybee flying the equivalent of seven to 10 trips around the world, visiting millions of flowers and eating pounds of honey.

Bees consume eight pounds of honey to make a pound of beeswax. The Big Dipper Wax Works goes through a pallet of beeswax every week, 40 to 60 gallons of liquid wax each day.

Brent Roose started making beeswax candles “three garages ago” because it was the only way he could afford the kind of clean candles he valued. From part-time candle making, Big Dipper grew into a facility and warehouse in south Seattle about a year ago.

In the beginning, while learning how to run a business, growth was phenomenal. Last year it slowed to a 40 percent increase. At first Brent ran the business while also having a full-time job, “until I got up the nerve to go out on my own.” He took on a partner, Flower Grosskopf, and now they sell candles from Seattle to the East coast.

Beeswax has a long and luminous history; bee keeping clearly was much more widespread than it is today. Beeswax is written into the Bible and Greek mythology. It was used as money, pressed into molds, and has been found in ancient Egyptian tombs and sunken ships, still pliable after thousands of years. Taxes were paid on large holdings of beeswax, considered a taxable asset in Roman times.

When beeswax candles first became an alternative to tallow candles, they became the preferred candles of nobility and the wealthy. They were sometimes called temple candles and associated with worship. Priests made beeswax candles for rituals and, as demand grew with the secular population, candle guilds were formed.

Big Dipper’s beeswax comes primarily from the Northwest. One beekeeper collects beeswax from smaller beekeepers and cleans the wax. “Cleaning has improved by leaps and bounds,” Brent says. “At first we cleaned our own but almost set the house on fire. Now diatomaceous earth, a clay-like substance, is used to filter impurities to the bottom as the wax rises to the top.”

Removing beeswax from the hives is vital for the bees to continue their work there. If the beeswax remains, the bees will leave and find another hive where they can make honey and store it in their newly formed honeycomb. Beeswax, therefore, is a renewable resource, unlike the petroleum base in common paraffin candles. Even soy candles require petroleum in their production.

The reason is that airborne contaminants, such as dust, mold and odors, are kept aloft by positively charged ions. But because negative and positive ions are opposites, they’re attracted to each other. They attach and the pollutants and allergens are no longer suspended by the positive ions.

Paraffin emits negative ions, too, though considerably less than beeswax. Paraffin, however, also contains petroleum by-products and additives; burning it is like burning a tire in your living room. It emits 11 toxins, two of which are toluene and benzene, documented by the Environmental Protection Agency as known carcinogens.

These toxins can be detrimental, especially to people with asthma, lung or heart disease, or allergies. Since paraffin is a petrol carbon soot, insurance companies are now investigating whether or not to cover the sometimes extensive soot damage from paraffin candles.

In addition to the renewable, healthier qualities of beeswax candles, their creamy feel and natural scent of honey and pollen, the high melting point of beeswax makes for beautiful, long-burning candles. In fact, beeswax candles have the longest burning time and brightest flames of any candles. Big Dipper indicates the burning time on each one. Brent and Flower use only cotton wicks, woven for stability. They do not use lead or metal wicks, which may come from China.

All Big Dipper candles are handmade. This gives job security to people, and besides, machines are not as efficient as hand pouring. The most labor-intensive work with the least room for error, is dipping tapers. Dipping is an art requiring about 17 dips with drying between each dip. Big Dipper also fashions some candle designs from molds it creates and offers some in ceramic holders made by a local potter John Taylor.

The tall, ivory tapers are extra special, made from wax cappings — the cleanest part of the honeycomb in the middle of the hive. These cappings are rare and precious like your dearest friendships.

From the wisdom of the hive and the dedication of local artisans, these beeswax candles are a gift of natural purity.