This article was originally published in December 2005

(December 2005) — Through the efforts of concerned parents, impassioned community activists and nonprofit organizations, 2005 has brought some great successes towards a cleaner, safer, more sustainable food supply and world.

From paying off a loan and saving another organic farm in Washington to adoption of a strong pesticide reduction policy by the Seattle School Board, it has been a good year. More people are thinking globally and eating locally.

“When I think about this past year, I’m encouraged by growing signs that our culture is becoming more aware of the wisdom of restoring traditional, organic food systems,” says PCC Produce Merchandiser Joe Hardiman. “The hidden costs of the industrialized farm model are apparent, and we face serious challenges. But it helps to celebrate what we’ve accomplished as we keep putting one foot in front of the other to move forward.”

Here’s a brief rundown of some exciting happenings over the past year and some challenges that lie ahead.

Working toward a WSU BIOAg program
Leading the nation

As our main public agricultural research and education institution, Washington State University (WSU) plays a key role in determining the future of agriculture in Washington. For some time, WSU went with the flow, emphasizing a chemically based, monocrop approach to agriculture. At quarterly dialogues with the Washington Sustainable Food and Farming Network (WSFFN), WSU then began working on how it might fund a biologically intensive and organic agriculture (BIOAg) program at WSU. The organic major will be the first in the nation. 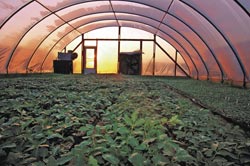 WSFFN has educated state legislators about the value of BIOAg and there now appears to be strong political support for BIOAg in the legislature. Supporters are optimistic it’s well positioned to get funding when the state legislature reconvenes in January.

The 2006 federal budget includes $359,000 in funding for research on organic cropping systems at WSU’s Center for Sustaining Agriculture and Natural Resources. Over the past five years, this brings the congressional appropriation to more than $1,413,000.

WSU continues to support one experimental trial on biopharmaceutical agriculture — the use of food crops to grow industrial chemicals and pharmaceutical drugs. But WSU also has established a policy to start tracking so-called “biopharms.” Cavalieri agrees that biopharms pose a very real risk of contaminating traditional food crops.

The tracking program is designed to keep track of what’s being grown where and will enable WSU to notify farmers and residents, a policy that’s more transparent than federal regulations.

Keeping it on the farm
Community Supported Agriculture (CSA)

The biggest difference many of us see this year in the Puget Sound region is a dramatic increase in farmers markets. “This push is coming from active community members,” says Andrew Stout of Full Circle Farm in Carnation. According to Stout, Full Circle’s CSA program (a subscription program for produce direct from a farm) is “off the charts. A lot of this is because people want a connection with where their food comes from.”

Zachary Lyons, executive director of the Washington State Farmers Market Association, says the number of farmers markets across the country nearly tripled over the past 10 years. In Washington, there were 60 farmers markets in 1998 doing $6 million in business; this year, 89 member markets are expected to surpass $25 million in sales. 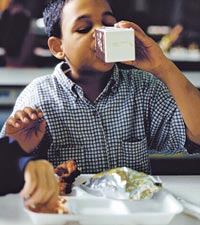 From farms to schools

Growing connections between farms and schools this year also are occurring, largely through the participation of parents pushing for organic, locally grown food in school cafeterias.

The Bellingham School District now requires that purchase decisions include an analysis of the cost/benefit and feasibility of including foods that are fresh, locally grown or produced, and certified organic. “We’ve got a long way to go,” says Stout, “but the building blocks are being put into place and communities are leading the way. Parents can help champion the cause by calling schools and connecting with farms to help remove the barriers and get healthy, local, organic foods into the school cafeterias.”

Give farmers a (tax) break

A grassroots group in Clallam County on Washington’s Olympic Peninsula successfully brought a proposition up for a vote to save farmland. The one-half percent Buyer’s Excise Tax (BET) would have been collected from property buyers at the time of sale and the funds used by the county to buy development rights on farmland.

Nash Huber of Nash’s Organic Produce worked tirelessly on this proposition, but it did not pass, he believes, because realtors used scare tactics. “In 30 to 40 years, people are gonna say, what were you people thinking? No farms to grow food on, just wall-to-wall houses. We have a problem. We’re losing 1,000 acres of farmland here each year.”

Colleen McAleer-Ellison of Remax Realty, which led the opposition, says, “The heirs of farmers see the land values go up and they want to cash in. But 40 percent of voters said this is important and voted for it. We’ll have to prove we’ll work to find solutions.”

Bennington Place near Walla Walla, where the Huesby family raises certified organic, grass-fed livestock, passed a milestone as the second farm saved by the trust. The balance of its purchase loan ($135,000) was paid off through corporate, foundation and individual donations.

PCC Farmland Trust Executive Director Stephanie Taylor says, “Our donors have been incredible. When it came down to paying off the loan, they all stepped forward and made it possible.” Currently, the PCC Farmland Trust actively is seeking another farm to save in King or Snohomish county.

Craig Winters, founder and president of The Campaign to Label Genetically Engineered Foods (known as The Campaign), speaks with a passion and depth of knowledge about food issues. Although attempts by Monsanto and other corporations to commercialize and market genetically engineered (GE) wheat were stopped this year, Winters knows that efforts to prevent future releases can’t let up.

Last year, a USDA-funded poll found 89 percent of the American public wants genetically engineered foods to be labeled, yet, Winters notes, “Congress is not paying attention. We need to make Congress pay attention. This is a winnable effort because the public sentiment is there.” This year, The Campaign established a continual presence in Washington, D.C. with a part-time lobbyist.

Winters also advocates pushing city or county council resolutions that endorse mandatory labels on genetically engineered foods. Resolutions don’t cost money and are just a statement of principle with no legal impact but, says Winters, they would have psychological impact.

Physicians for Social Responsibility (PSR), The Campaign to Label and others led a national letter-writing campaign, and Tillamook was deluged with more than 8,500 emails, faxes and letters. Ninety-nine percent of them thanked Tillamook for going rBGH-free and asked the company to hold the line against Monsanto’s heavy lobbying.

Scientists cite evidence that rBGH could be associated with an increased risk of various cancers in humans, including breast, colon and prostate cancer. 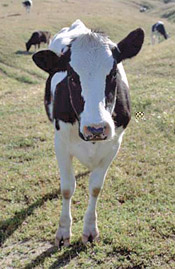 Rick North, project director of the Oregon Physicians for Social Responsibility’s Campaign for Safe Food, says, “We’re very grateful that Tillamook went rBGH-free for its cheese. I hope it does the same soon for its ice cream, butter, yogurt and sour cream, which still come from rBGH milk. We’ve seen lots of progress. It takes consumers making their wishes known.”

Persisting with the campaign

North says Oregon’s PSR Campaign for Safe Foods focuses on Oregon but is branching out to work with people in other states. He recently met with Wilcox Family Farms here in Washington, which has a line of milk made without rBGH but still accepts milk from farmers who use rBGH for many markets.

North hopes to talk soon with Darigold about its use of rBGH and the many concerns. “I believe in direct communication and saying ‘Let’s sit down and talk about this.’ Obviously, I’d like to persuade them to discontinue using it.”

North also was instrumental in seeing a bill pass Oregon’s Senate that would restrict biopharms. Oregon’s legislative session ended before the House could take up the measure, but the success in the Senate is significant. This is the furthest that any biopharm legislation has progressed in any state.

Parents advocating safer schools are celebrating the Seattle School Board’s adoption of a cutting-edge policy to protect students from high-hazard pesticides at school.

The Washington Toxics Coalition led the charge on this issue, providing organizational and technical support to activist parents and speaking to groups. The school district policy includes procedures to eliminate use of the most dangerous pesticides, including those that can contribute to cancer, nervous system damage, reproductive harm, hormone disruption or damage to the environment.

“This is a great victory,” says Greg Small, executive director of the Washington Toxics Coalition, “the culmination of 10 years of work.”

Another big victory this year in our state was winning a fight in the Washington state legislature to fund the Department of Ecology’s program to phase out use of persistent toxic chemicals. This is the only program of its kind in the United States and is fully funded.

These chemicals, called PBTs, are some of the most toxic on the planet and include mercury, dioxin and the toxic flame retardants that are rapidly building up in human milk, our bodies, and in wildlife. Gregg Small says, “The stated goals of the Department of Ecology’s program is to phase out the use of these toxins, clean up existing sources and prevent new releases.”

Vision for the future

This is an optimistic time in the organic business. Nash Huber and Andrew Stout each have developed thriving apprenticeship programs to train the next generation of organic farmers. A couple dozen apprentices from their operations now have gone out on their own, starting new organic farms across the country. “It is exciting to mentor new growers and a wonderful opportunity to enrich the future,” says Stout.

Many people are working diligently and enthusiastically for a more wholesome future, tracking key issues, keeping an eye on developments with our food supply and the environment. Momentum is growing across the Pacific Northwest. So when we take stock of what we have to be grateful for, let’s celebrate what we’ve accomplished and together set our sights on the challenges ahead.

Fall member meeting, Board meeting, Talk to the Board, and more