This article was originally published in November 2005 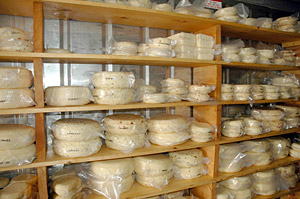 Cheeses in the aging room at Golden Glen Creamery.

(November 2005) — In 2002, there were only three Washington farms making and selling artisan farmstead cheese. Now there are 15.

“Getting into farmstead cheese isn’t easy. Nobody can tell you how to go about it,” says Brandy Jensen from Golden Glen Creamery. “And if you contact another cheese producer (from another state), they may not be willing to share information.”

On a cool, overcast day, just outside of Bow, I pull into the Jensen’s Dairy. It’s been here since the 1960s. Bits of hay rain down from the big blue silo as I walk towards the farm store that doubles as an office. Inside, I linger in front of the cheese case, pondering my choices while waiting for Brandy. Picking up three varieties — Sweet Basil, Jalapeño and Mozzarella, I can’t wait to open the Jalapeño. The small, tender, spicy morsel melts in my mouth — pure ethereal comfort food, fresh from the farm.

But Golden Glen is more than a compelling cheese. It’s also a healthier choice than unconventionally produced cheese made with milk from cows fed growth hormones to increase milk production. Golden Glen uses milk from the Jensen’s herd of 380 Holstein and Guernsey cows. The milk is rBst- and additive-free.

Brandy, with a spray of freckles across her face, an enthusiasm for farming and a generous dash of optimism, greets me with a big smile. She grew up farming but never expected she’d end up on a dairy farm. Not until she met and married Doug Jensen. Now, she’s vice president of the creamery. As we walk to the production room, she tells me the Golden Glen story.

A few years ago, milk prices plunged and remained so dismally low dairy farmers could barely make ends meet. Many already had given up. When the Jensens held a family meeting, Doug and Brandy presented a delicious plan. Diversify the farm and make cheese. That way, they could pay the bills and preserve the lifestyle they love. The men would run the farm and the women — Brandy and mother-in-law Judy Jensen — would manage the cheese company. 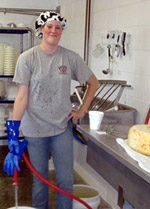 Volunteer Konni Miller comes in once a week to help pull the mozzarella.

The family enthusiastically approved the plan. So Brandy and sister-in-law Andrea arranged a trip to CalPoly in San Luis Obispo, Calif. to take a cheese making course. “We read a lot, did research and hands-on trials. And once the machinery was up and running, we only had to throw away two batches,” Brandy says. Today, Andrea works when she’s available, and Brandy, Judy and Sue Shields, a volunteer, run the day-to-day cheese production sales and delivery. Sue came to the farm in 2004 to help out and learn to make cheese.

A 300-gallon pasteurizer is hooked onto the backside of a stainless steel vat that dominates the small concrete production room. To make cheese, raw milk is poured into the pasteurizer and then pumped into the vat with a culture.

After an incubation time, the liquid is stirred. Larger cheese producers have long tubs with rotating stainless steel blades to stir the curds and whey. Here, Judy and Sue, wearing aprons and plastic caps, stand on either side of the tub with white oars stirring, like rowing a boat. Occasionally one of the ladies reaches in and grabs a cheese curd, checking the consistency.

When the curds are just right, the whey is drained and curds are banked on either side of the tub. After the pH reaches a certain point, the cheese is slabbed into blocks. Salt and spices are added before hand pressing it into molds. One day they make cheddar, the next Gouda and then Mozzarella.

Making Mozzarella is hot, time-consuming and labor-intensive, and the small room can seem claustrophobic, with many people hand-stretching the cheese. “The other day it was Judy and Sue and all the volunteers we could get. The volunteers don’t always come back,” Brandy says, laughing.

Dairy farms always have been part of Skagit Valley. In the late 1800s there were 900 dairies — small farms where every cow had a name. Today, there are 50 dairies. Just a few decades ago, nine dairies were within a seven-mile radius. Now, the Jensen’s is one of the last two remaining. Making cheese is one way to survive.

In other states, such as Wisconsin, cheesemaking is well established and cheese associations share information. Sensing this need in Washington, last spring Golden Glen, Samish Bay, Beechers and Pleasant Valley got together and formed the Washington State Cheese Association (WSCA). “Any local cheesemaker is welcome to join,” says Brandy with engaging optimism about the future.

Letters to the editor, November 2005

Insights by Goldie: Seasonal eating in a global marketplace