This article was originally published in November 2005

(November 2005) — With a new U.S. farm bill expected in 2007, some agricultural advocates are saying that government farm programs should be linked more closely to nutrition goals. 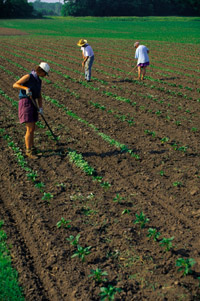 The Department of Agriculture’s new food pyramid suggests, for instance, that half our diet should be fruits and vegetables, but the U.S. government doesn’t subsidize farmers who grow those foods. Instead, most of the federal agriculture subsidies go to farmers growing corn, wheat, soybeans and cotton, which often become cheap ingredients in nutritionally poor, processed foods.

The food pyramid tells us to avoid foods made with hydrogenated oils and sweeteners. But while a lot of the corn and soybeans is fed to livestock, soy also is turned into hydrogenated oil to give snack products a flaky texture. Corn is turned into high-fructose syrup to sweeten soda pop and other high-calorie foods with little or no fiber or nutritional value. Cotton is used to make artery-clogging cottonseed oil. These products are getting cheaper, while prices for vegetables and fruit are rising.

What’s wrong about this, says Ralph Grossi, president of the American Farmland Trust, is that we as a society talk a lot about diets and obesity, “yet our farm policies are not structured to encourage the kind of diet the food pyramid suggests we should adopt.” Our plates would look very different if they matched farm subsidies.

Here’s what the food pyramid says we should eat, based on a 2,000 calorie-a-day diet:

The 2005 farm subsidies, estimated to cost $17 billion, include:

Produce groups say they don’t want to be subsidized; they just want their share of federal support. In Europe, governments subsidize farmers, not individual crops.

Insights by Goldie: Seasonal eating in a global marketplace