This article was originally published in June 2005 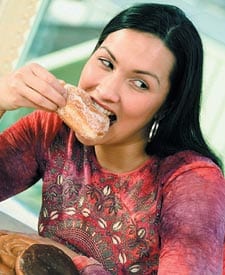 (June 2005) — Six months ago, Melissa didn’t believe she could lose her constant desire for sugar. A typical sugarholic, she remembers fighting a sugar craving every day.

“Sugar controlled me — my weight, my energy, even my social life,” she says. Some days she held out until after dinner, others she lost before noon.

“Grocery stores are full of it and it’s there when I pay for gas. They even have a dish of chocolate kisses at my bank.” Melissa felt surrounded. “I couldn’t resist,” she recalls. It is important to take pleasure in food and the occasional “treat” is to be enjoyed and savored. The problem is when the occasional becomes a compulsion.

Today, Melissa is in control of her sugar habit and can skip the sweets. Using simple strategies, she discovered, like many others, that it is possible to change her tastes in food. What’s the big deal?
Research shows that sugar contributes to as much illness and suffering as other legal addictions, but suffers none of their social ostracism. Smokers huddle outside. Alcoholics have their own support groups. Sugar addicts … well, someone at the office is always bringing them sugary treats.

Sugar is far worse than “empty calories.” It is actually an anti-food. It steals nutrients. People live longer on nothing than they do eating sugar. This fact was first discovered with marooned sailors in 1806 and later verified by laboratory experiments.

The refining process removes fiber, protein, vitamins and minerals and requires the body to rob these essential nutrients in order to metabolize the sugar. It drains the body of B vitamins, chromium, zinc, magnesium and calcium. With fewer nutrients available, other necessary body processes suffer.

This applies to refined carbs as well as sugar. In Singapore, for instance, during a white-rice shortage, infant mortality was cut in half after a government decree ordering the consumption of whole, unrefined rice only. Refined wheat also has protein, fiber and a dozen nutrients removed. Many sugarholics and others consuming lots of processed food live in a constant state of nutrient depletion.

Why do we crave sugar?
Humans evolved as carb seekers. The tongue has its own parking place for sugar. The brain, which utilizes more calories than any other organ, constantly bellows “feed me.” The problem is that signal for calories becomes scrambled by our culture into “bring me sugar.”

When the genetics for sugar orientation were sorted out there was no such thing as refined sugar. Even the apple was smaller, less sweet and more crabby. In the last 200 years, we’ve gone from eating no refined sugar to an average per capita intake of 140 pounds per year. Think of a carbohydrate, or starch, as a long chain of carbon atoms, like links of a necklace. Refining is an artificial process that breaks the chain into shorter pieces. Short chains happen to taste sweet. Sucrose, table sugar, is composed of only two carbon molecules, fructose and glucose.

For thousands of years the major source of sugar to the human body was the digestion — breaking down — of long-chain carbohydrates. Now machine grinding and chemical reactions pre-digest our carbohydrates. Basically, refined carbohydrates release sugar into the blood stream faster than we’ve evolved to handle it. This challenges the cells’ energy-producing systems, throws hormones out of balance, and triggers the release of numerous harmful compounds.

Research shows that sugar increases the risk factors for cardiovascular disease — both heart attacks and strokes — by raising blood pressure, blood sugar, cholesterol, clotting factors and inflammatory chemicals. A major concern for health authorities now is the huge number of baby boomers who have progressed from over-consumption of carbs, to weight gain, to high blood pressure and cholesterol, and ultimately to heart attack or stroke.

Melissa eventually became a poster-child for the effects of refined carbohydrates. “My weight continued up. My skin started breaking out when I was in my 30s. I relied on coffee for energy. Then came the blood pressure and finally, my doctor was saying ‘pre-diabetic.’ That got to me.”

Retraining your brain and body
Melissa felt like many people. “I thought it would be impossible. No way could I not eat sugar.” But after applying a variety of strategies (see below) she reported, “Slowly, I got stronger and I had fewer cravings. It wasn’t easy, but each day I felt better.”

After six months of recovery, Melissa felt like many others who doubted they could change their taste preferences. “I would never have believed it. I can actually go to events where they’re serving desserts and not want any. They’re just too sweet on my tongue. I have more energy, less depression and it’s helped my self-esteem not to be strung out.”

Like Melissa, you can gain control of the health-robbing compulsion for sugar. Take control of your sweet tooth and enjoy a sweeter life.

Strategies to stop the sugar craving

Regular meals and snacks
Instead of starting with a negative, “stop eating sugar,” go with a positive action — eat more often rather than less often, every three hours is best. Eating often is known to reduce carb and sugar cravings, helps with weight control and reduces rates of diabetes. Small amounts of food work best. Include proteins, whole grains and vegetables — real foods instead of fluffy, white, refined food-like edibles. Don’t worry about gaining weight; the opposite usually happens since eating often increases metabolism. I’ve seen patients dramatically change their lives just by eating breakfast regularly and by adding small snacks throughout the day. This usually requires that you carry healthy emergency rations wherever you go.

Protein at every meal and snack
While carbohydrates wreak havoc with blood sugar, protein helps it stabilize. The general rule from nutritionists is one-half to one gram of protein per 2.2 pounds of body weight. This means that a 155 pound person requires 35 to 70 grams of protein throughout the day in divided servings. As a reference: a can of tuna contains about 40 grams, an egg has six, three ounces of cheddar has 22, and a cup of brown rice has 15 grams of protein.

It’s handy to own a book with the protein content of foods. Start by counting your protein intake for a week so you know where you are. Then eat one gram of protein per 2.2 pounds of your weight for a week. After that, adjust your proteins to the level that feels best. Do the opposite of most Americans; eat your largest portion of protein in the morning, your smallest for dinner. Many people find a concentrated protein source, such as whey, helpful during the early stages of their struggle with sugar addiction.

Fat at every meal and snack
Fat has been much maligned by the medical industry. No doubt many people eat too much. However, good quality fat, which is important for blood sugar control, is deficient in most American diets. By “good quality” I mean fats from organic, free-range meats and dairy, nuts, seeds, and oils from what I call “easy press” sources — olives, avocado or nuts. These are preferable over “hard press” oils, such as soybeans, corn and canola, that usually require some pre-treatment, such as steam, before pressing.

Avoid sugared foods and refined carbohydrates
This seems impossible for the true addict, but becomes easier with regular meals containing protein and good-quality fats. It requires reading labels and reducing white-flour and other refined products.

By pre-selecting “better than” sweets, such as fresh berries or a low-sugar, high-quality chocolate, you reduce your vulnerability to the overly sweet, nutrient-poor choices commonly available. Another useful strategy is to lessen the damage of sweets by combining them with a protein. In other words, before the donut, eat a handful of almonds, a boiled egg or a protein shake, then only half the donut. Eventually you won’t want the donut at all.

Replacing nutrients
The standard American diet (SAD) with its high levels of refined foods, is deficient or imbalanced in many nutrients. Eating sugar actually depletes vitamins and minerals. If you’re going to recover from sugar addiction, you need to replace these vital nutrients and help control blood sugar levels. A good multivitamin with zinc, chromium, magnesium, potassium, manganese and B-vitamins helps subdue the craving demon. Omega-3 oils, such as fish and flax, help repair damage.

Healthy table
Eating slowly and tasting your food slows down the release of sugar. We have taste buds for sweet, sour and bitter. Subtlety of taste recognition is wired into us, but we often lose the other flavors under the torrent of sweetness.

Treat the energy problem
Sometimes sugar cravings are triggered by not having enough energy. If fatigue causes you to crave sugar, see your naturopathic physician.

Support
Remember, you are bucking the entire food and beverage industry. Find emotional, physical and spiritual help. Seek out friends who support you kicking your addiction and will not sabotage you by bringing you sweets.

Tom Ballard, RN, ND has been in private practice and teaching in Seattle for 23 years. His book, “Nutrition in a Nutshell: The Only Three Rules You Need for a Healthy Diet,” is looking for a publisher. He may be contacted at the Institute of Complementary Medicine, 206-726-0034.

Insights by Goldie: Of guidelines and pyramids and diets ... oh my!