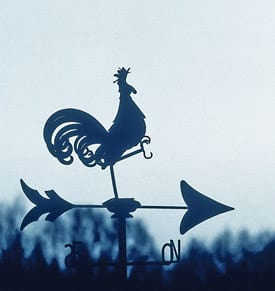 A new year gives us a chance to take stock of our lives — and our hopes and dreams. For one local family, their dream took root on a tiny plot of land in Bellevue.

(January 2005) — The chickens changed everything. Before she raised poultry, Ruth Babcock’s fruit and vegetable garden in her city yard satisfied her urge to work the land. Lori Babcock, Ruth’s partner, happily prepared meals from the garden’s goods until she used fresh eggs from their own hens. The taste of those meals sent Lori to her gourmet food magazines, searching for articles about cooking with animal products. Ruth began reading about raising ducks, turkeys and goats on small farms. Soon she realized she had been holding a dream deep inside her since childhood: she longed to be a farmer.

Ruth finally spoke her desire out loud to Lori. Wouldn’t it be wonderful to live on our farm with people coming to your meals at our bed and breakfast? “She didn’t look at me like I was crazy and we began talking,” says Ruth.

Ruth and Lori are both high-tech workers, women in their 40s who look outside of work to fulfill their passions: Ruth as a gardener and Lori as a gourmet cook. When they first met, they quickly realized their skills complemented one another. When discussing farming, though, they weren’t ready to give up their day jobs nor could they afford to buy land.

Luckily, an opportunity presented itself. Ruth’s cousin Karen owns an acre and a quarter of city land in a Bellevue neighborhood; much of it underneath power lines and over gas mains, making the land part of an easement that stipulates no construction. Ruth had mowed the 2-foot high grass for Karen a few times. 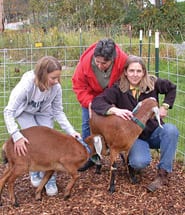 The Babcocks originally intended to keep goats for food, but they fell in love with the goats and now use only their milk to make cheese.

Two summers ago she looked at this big expanse of weeds and thought, “Wait a minute, Karen needs a goat and I want ducks.” Karen accepted Ruth’s proposal and a tiny city farm, Emerald City Pastures, was born in August 2003. Turning plots of land tucked between houses into productive, fertile farmland, what an ingenious idea! For Lori and Ruth, it meant realizing their dream of having a small, sustainable farm.

Although their original purpose was just to create family meals from food they raised, they had other goals centered on sustainability and community. As Peter Rossett, former executive director of Food First, the Institute for Food and Development Policy, says, small farming is not only beautiful, it is more sustainable than large-scale farming. Small farms produce 200 to 1,000 percent more food per acre. Small farmers are better stewards of natural resources. Small farms are more efficient, and they promote regional economic development. (See www.foodfirst.org for more information)

The Babcock’s farm illustrates these ideas well. Big farms usually plant monocultures or raise one type of animal, an inefficient use of space. Emerald City Pastures rotates its livestock, which replenishes soil fertility on the cheap. There are no permanent structures, and they don’t use expensive machinery, making their farming affordable. They strive to take nothing from the land except what it produces. The chickens work the ground, replenishing the soil for all the animals, with some assistance from Ruth.

Sustainable communities
Ruth and Lori aspire to make their neighbors’ food more local, picturing their farm as a public endeavor. They talk of Michael Ableman, who began working on a California farm as a young man and ended up staying 18 years. When the farm was in danger of being destroyed, the area’s residents stood behind it, saying, “This is our garden and you can’t take it from us.” Although the Babcock’s don’t yet have permits to sell food to their neighbors, this is their future intent. Says Lori, “We want to keep the farm local so it belongs to the community and the community belongs to the farm.” 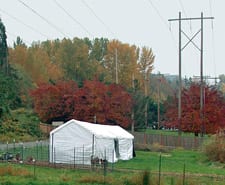 The easement doesn’t allow permanent structures. The goats and turkeys manage to live well in this white tent.

Their farm already does feed their own family, immediate and extended, and a circle of friends who have supported Ruth and Lori since day one. Although their urban friends find their enterprise a bit strange, they, too, are a viable part of it. For example, when Ruth and Lori held a raffle to buy their goats, the prizes ranged from farm eggs to one of Lori’s gourmet meals. Now they own two beautiful brown goats, and their friends enjoy homemade cheese made from the goats’ milk. “Most people think we’re corny,” says Lori with a laugh, “but there are people out there who say, ‘We don’t want to [farm] but we want to know that you’re doing it.'”

But turning a tiny parcel of land into a community farm was only the first step to realizing their B&B farm goal. Lori and Ruth continue to work full-time in the computer industry. Ruth is a part-time farmer: on weekdays, she works at the farm from 8 to 10 every morning; on weekends she spends at least half a day there, sometimes more. Ruth’s daughter, Casey, is in middle school right now, and they want to stay in the city until she graduates from high school.

This five-year plan allows them to search for affordable land and be 100 percent sure the farming life is for them. “By then, I’ll have figured out what I can do on a small piece of land or I’ll be sick of [farming],” says Ruth. “We need to find out if we can make that kind of commitment.”

Finding affordable farmland for their B&B farm goal is, however, a huge obstacle. Lori believes communities need farmers like themselves and hopes one will pursue them. “Our hearts’ desire is to be in an organic farming community, where we organically and humanely raise all kinds of farm animals and fresh produce for the family and surrounding community, as well as for the B & B menus,” says Lori. “In our minds, that means 40 acres of good prime soil in an area that would attract guests, not too far from Seattle, maybe a one- to two-hour drive.”

Right now, both Ruth and Lori cherish their new enterprise and feel they have made the right decision. Although, even when compared to other small farms, Emerald City Pastures is minute, it is a productive slice of paradise to this couple, home to two goats, about eight turkeys, more than a dozen ducks and dozens of chickens. Some of the ducks and chickens lay eggs while others are for eating. 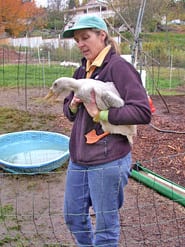 Ruth is the farmer in the family.

Since no permanent structures can be built, the goats and turkeys live in a small white tent that protects them from the wind and rain. The ducks and hens wander into another temporary white tent to lay their eggs.

The morning I visit, Lori is feeding the animals. Ruth and Casey are milking Sonnet, the older goat. “It took us about a month to figure out how to milk her. She liked to put her foot in a bucket, so we ended up holding her back legs,” says Ruth. “Our farmer friend laughed at us. She said that’s no good and taught us how to tie her legs back when she kicks.”

I admit I’ve never seen such pretty goats, and Lori seconds my thought. Lori, Ruth and Casey have become quite attached to the goats, Sonnet and Daly, who sport wonderful floppy ears, luxurious light brown hair and big eyes. The turkeys are all heritage breeds, meaning they, too, are more beautiful than typical farm turkeys.

Their speckled feathers are almost as pretty as peacock feathers, and they display them just as peacocks would, which makes me stop to admire them. With their multicolored feathers, the laying hens are also quite pleasing to the eye; these feathers are soft and perfect for petting. The broilers are all white, making for a colorful combination of chickens. The ducks are brown and grey and black and blue, and they drink their water from a plastic children’s swimming pool.

Ruth, Lori and Casey all have an easy rapport with the animals. Ruth was worried that Casey would have a problem with raising animals to eat, but she adapted quite well and has a natural ease with them. “When it’s not a school day — she’s in the seventh grade — she’ll get up at six in the morning and go to the farm,” says Ruth, who gives her the option of staying home. Indeed, Casey seems to relish being here, and picks up her favorite animals, offering them to me in turn.

A passion for farming
Ruth says processing day is a hard time at the farm but says their procedures feel better to her than what she’s witnessed on TV. “My daughter participates. She carries the birds to me and holds them and talks to them,” says Ruth. “They are treated humanely and lovingly.”

Their friends’ children visit the farm and eagerly await the meals featuring its produce. One little girl is a very picky eater but often asks her parents when they’ll get the next juicy chicken from Emerald City Pastures.

For Lori, shopping in her backyard and at her farm is the best in gourmet food shopping. She knows they’ve added stress into their lives by adding farming into their busy schedules. “But it gives us great joy, so it relieves stress too,” says Lori. “And we know we’re eating so well.” For Ruth, farming is a daily task. From the outside, it looks exhausting, adding two hours of chores to a full-time job, but for Ruth it’s a dream realized. Her contentment comes from the little things.

“I never knew how beautiful the turkeys were going to be,” says Ruth. “The process of the whole thing unfolding before me is really joyful. I love the routine. The other day, after I got done, I watched the laying hens for 10 minutes and listened to the farm noises around me. I just love it and I find it’s really what I want to do.

“People think it’s not worthy of someone who’s gone to school for eight years. But I know the high-tech job is not my passion. I do it and I can be quite inspired by it, but it’s nothing like I feel about farming: raising animals in a healthy humane way, seeing them thrive, and bringing food to the chef.”