This article was originally published in November 2004

“It feels good to grow organically — it’s the honorable thing to do. Farming is an honorable profession.” 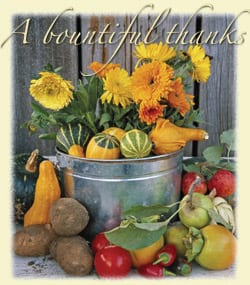 The days are getting colder and Pacific Northwesterners are beginning to move in out of the rain, trading trowels for good books. Local farmers have harvested all but the last hardy crop and are looking forward to their annual winter hibernation.

It’s time for us all to reflect on the past summer months and the pleasures of local, organic bounty — the ripe strawberries and early crimson cherries of an especially warm June; July bursting with greens, blueberries and beans; the alfresco dining of August with dripping peaches, grilled zucchini and local corn; September bringing the year’s new apples and pears; and the farewell tipping of the seasonal hat with winter squash and pumpkins in October.

In all these things, there’s an appreciation of change — change that happens all the time but in the most predictable fashion. Year in and year out, local farmers tend these crops, wading through the muck on bone-chilling spring mornings and toiling in the sweltering mid-summer heat, all for the wonder of what marvelous things can come from seed, dirt, water and sunshine.

Without their labor of love, we would all be a little hungry, both for that which keeps us well fed and for a sense of place and belonging. These are some of the people to whom we would like to give thanks. 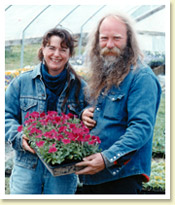 JoanE McIntyre and Michael Shriver started Rent’s Due Ranch as a garden to put food on the table for their growing family. Before long, a garden’s abundance turned into the family business, a 47-acre farm in Stanwood.

We can be thankful to them for the first signs of emerging spring at PCC — when rows and rows of plant starts arrive from Rent’s Due Ranch. Even the most practical shopper develops a need for impatiens, begonias and all manner of baby vegetables to play their part in coaxing spring along.

Rent’s Due carries us through the entire growing season with, among other things, snow peas, strawberries, raspberries, early blueberries, potatoes, onions, leaf lettuce and cherry tomato baskets. Recent memory will no doubt bring a vivid and cheerful picture to mind of the heaping mounds of organic Jack-o-Lantern pumpkins, totaling about 50 tons, welcoming you to PCC stores. With one of the most long-standing relationships, PCC and the folks at Rent’s Due have been bringing beautiful, local food to many local families’ tables since 1988. 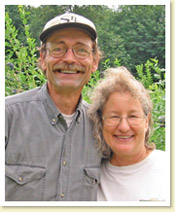 If you consumed copious quantities of the fat, flavorful Many Hands blueberries when the first 2,000 pounds landed in PCC produce aisles at the end of July, then you have Jim and Harlyn Meyer to thank. The Meyers have been farming organically together since 1972.

In 1993, they purchased 23 picturesque acres in Rockport on the original site of Cascadian Farm. The Meyers manage the cultivation of 11 acres and five varieties of blueberries under the Many Hands label. The majority of these berries are sold directly to PCC.

Harlyn notes, “Every year, the blueberry business is growing because people really like our fruit. Thank goodness!” The top-quality fruit is picked straight into pint containers by fairly paid farmworkers who glide through the fields a number of times during harvest season, picking only the very ripest fruit.

Harlyn, nibbling on a blueberry every few feet as we walk through the field, says, “Blueberries do very well up here and we enjoy them a lot as a crop. You can slow down in the winter; and then in the summer for July, August and half of September, we are crazy … crazy busy.”

Scott Leach has been providing PCC shoppers with delicious, organically grown Eastern Washington tree fruit since 1989. For many years, he tended 60 acres of Red and Golden Delicious apples and Bartlett and Anjou pears. Three years ago, when many Eastern Washington farmers, including Scott, were hit hard by a fast-moving and destructive hailstorm, he saw opportunity when others threw in the towel. “It took a while before I could walk through the orchard without feeling ill and wanting to leave,” Scott remembers.

But he persevered, salvaged some of his crop and made an agreement to lease and take over an additional 45-acre certified organic tree fruit farm when his neighbor called it quits. The trees have recovered and Scott has just finished harvesting his third crop of Granny Smith, Fuji and Gala apples and his first harvest of Taylor’s Gold pears, much like a Comice pear. So as you’re savoring the rewarding crunch of a crisp apple or fall pear, you can be thankful that Scott Leach has toughed it out for you. 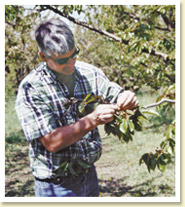 Fresh out of Washington State University with a horticulture degree in 1984, Mark LaPierre returned to the Yakima area and planted his first orchard, a seven-acre plot of Rainier cherry trees just a stone’s throw from the land his grandfather had farmed in grapes.

Since 1989, PCC shoppers have anticipated the arrival of Mark LaPierre’s fruit throughout the summer. This year, we were thankful to have the pleasure of fresh nectarines grown by Mark LaPierre. These nectarines are from well-established trees that also act as nursemaids to a growing group of Pink Lady® brand saplings planted in the shelter of overhanging branches. Because of packing house complications, we missed out on his famous cherries this year, but in years to come, this long-standing relationship with a favorite local grower will surely endure. 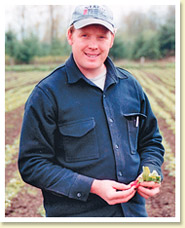 On 134 acres of prime agricultural land in Carnation, Andrew Stout is infusing the King County farming community with youthful innovation. While the average farmer in United States is 55 years old, we can be thankful that farmers like Stout, in his 30s, are picking up the reins.

The folks at Full Circle Farm have been supplying PCC directly with their signature organic salad mix since 1996. They now grow 75 varieties of fruits, vegetables and herbs.

The farm is nestled between Griffin Creek and the Snoqualmie River. A lot of effort is put into land stewardship, clearing weedy brush and planting native plants along the banks.

At almost any small farming advocacy gathering, you’re likely to see Andrew Stout’s name on the roster of speakers. He places great emphasis on the importance of educating the local community about farming issues and encouraging support of local farmers. For more information on Full Circle Farm, see the Going full circle, Sound Consumer, July 2004. 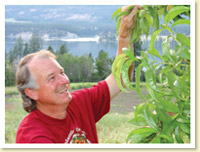 Bob and Shelly Berryman have been tending seven acres of organic peach trees on a bluff overlooking the Columbia River near Lake Roosevelt since 1981. In this isolated area, away from the pesticide drift prevalent in the state’s larger peach-growing regions, the Berryman’s are proud of the cleanliness and quality of their organically grown, tree-ripened peaches.

“We go to extremes to ensure that our place is not polluted with pesticides and herbicides,” says Bob. As a longtime organic farmer, he helped set up the original Tilth Producer’s organic certification program. “We’ve been working at it for a long time and showing others how to grow organically. You can be profitable and in harmony with nature.”

But, like many small-scale farmers, the Berryman’s also moonlight as school employees the rest of the year to supplement their summertime farm income. Starting in mid-August, peaches at the peak of perfection are handpicked into small peach buckets and transferred into padded trays before making the short trip to PCC. Thanks to the Berryman’s dedication, PCC shoppers have a month of mouth-watering varieties of peaches, including Red Haven, Red Globe, and Blazing Star. 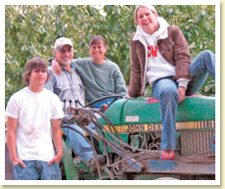 If you’ve met farmers handing out delectable slices of ripe, organic Bosc pears at a PCC demo table, then chances are you’ve met Apple and George Otte. After living in the Tonasket area with a sizable organic garden for many years, the Otte’s decided to purchase a fruit orchard in 1997. Immediately, they began the three-year organic certification process.

“There was never any doubt in our minds that we would go organic, because that’s what we believe in,” says Apple.”It feels good to grow organically — it’s the honorable thing to do. Farming is anhonorable profession.”

They now work 18 acres of certifiedorganic fruit trees, growing an increasingvariety of apples, pears and cherries. This year, PCC shoppers can thank them for fresh, local Lapin cherries, Bosc pears and Gala, Cameo and Fuji apples. It’s also the first year their diminutive, tasty Seckel pears have been available at PCC.

“Besides the work itself and being outdoors, connecting with people makes you feel good as a farmer,” adds Apple. “Thank you very much for supporting our farmand fruit in the last few years and forsupporting organic farming in general by your patronage.” 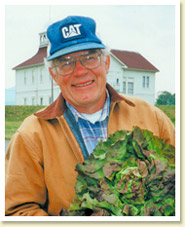 Nash Huber has been farming near Sequim on the Olympic Peninsula since 1968. His farm became one of the first certified organic in Washington state in 1979. Huber has worked with PCC for a decade, supplying us with a steady, diverse supply of produce that often takes on gargantuan dimensions.

Huber has great concern for the future of American farming. He was an instrumental part of the team that gave birth to the PCC Farmland Fund in 1999. Narrowly escaping encroaching development in the region, the 100-acre Delta Farm was the first farm purchased by the community of Farmland Fund donors.

“We have to be able to see past the next two or three years,” Nash says. “We need to plan for the next generation. Now we have to focus on the land to preserve it for the young people.”

We can be thankful for his focus, because the Delta Farm, now a diverse, organic farm of carrots, pigs, chickens and row crops, is providing his growing group of young apprentices with ample learning ground for their own lives as farmers.