This article was originally published in November 2004

One of the last, small family operations, still ranching the old-fashioned way.

(November 2004) — Tim and Joan Diestel have a passion for doing things the old-fashioned way. Every day, they still “walk the flock” and visit their birds, a tradition dating back nearly 80 years. That’s when Tim’s great-uncle, Ernest Bottini, started raising range-grown turkeys.

The story behind the Diestel turkeys in PCC stores started more than 100 years ago, when the Diestel forebears immigrated from Germany and Italy to start ranching in the Sierra foothills of California. By the early 1920s, great uncle Ernie had built up a successful business with many famous landmark San Francisco restaurants; he delivered old-fashioned “New York dressed” turkeys from his own truck. 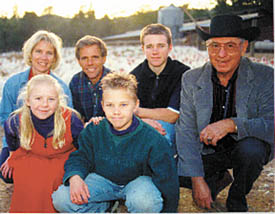 Joining Uncle Ernie on some of those trips was a nephew, Jack Diestel. As a young man, Jack worked on Uncle Ernie’s ranch and eventually he began his own ranch in 1949. One year, Jack sold some of his turkeys to local folks who came to visit around Thanksgiving. One thing led to another and now Jack’s son, Tim, is teaching his kids the business — the third generation teaching the fourth.

The Diestel family turkey ranch is one of the last small, family-owned operations in the United States that still processes and delivers its product to market. It means the family maintains control over each and every part of the turkey business. This includes breeding turkeys, milling their homemade vegetarian feed, range-growing their birds, and owning and operating two USDA-inspected facilities to process their turkeys and turkey products. The family believes that operating on a small family scale and having personal control over every step of production ensures the best quality possible.

Tim says that concentrating on the health of the flock is one secret of sustainable success. All the turkeys freely roam the range, getting plenty of exercise, clean mountain water and fresh air. The feed is corn and soy with absolutely no animal by-products. In addition, these turkeys are allowed to grow and mature naturally, without artificial stimulants, a slower process taking months longer than the industry standard. Good husbandry and strict sanitation eliminates the need for drugs and techniques that overcrowding in factory farms incur.

Turkey products with the Diestel name never contain any artificial ingredients such as nitrates, phosphates, MSG, artificial colors or flavors. As Joan Diestel says, “No artificial anything!” There are sausages, breasts and roasts to choose from as well as cold sliced turkey in smoked, honey roasted, herbed, peppered, pastrami and chipotle flavors. And now there’s some organic, too!

Some Diestel hens are certified organic and sold as “Heidi’s Hens,” named after the Diestel’s daughter Heidi. But even for their non-organic birds, although the grain isn’t certified organic, the Diestels voluntarily have it tested to make sure it’s not contaminated with pesticide residues.

The Diestels also provided key leadership in achieving development of the USDA standards for certified organic poultry. After the Organic Food Production Act (OFPA) was passed in 1990, Tim Diestel testified at national hearings to help define the requirements for organic poultry.

The Diestels are so confident of what they do and how they do it, they invite you, the consumer, to visit their ranch and enjoy the same fresh air and open spaces that nurture their turkeys. They have their name on it.