This article was originally published in June 2004

The garagiste: Winemaker in the ‘hood

Where do winemakers come from? I mean, if you think about it, winemaking isn’t something the average Jill or Joe considers as a career option. Turning fruit into wine isn’t even on the employment radar for most folks.

A career in the wine biz isn’t among the options promoted or encouraged for high schoolers (although, in my adolescent indiscretions, my counselor should have recognized a natural aptitude and put me on the appropriate vocational path from the get-go). At most high schools, the curriculum seems pretty well geared toward the avoidance, rather than the embrace, much less production, of beverages alcoholic.

Most winemakers find their way to the wine business by serendipity. Yet, almost all winemakers seem to have one event in common, an epiphany, or a single bottle of wine that stoked the flames of a desire to vinify.

For Mark McNeilly, owner/winemaker of Mark Ryan Winery, it was a bottle of Bordeaux, a 1990 Les Forts de Latour that ignited his desire to make wine. He had developed an interest in wine while working as a waiter and bartender, but that particular bottle fired the passion.

“The flavors in that wine completely reeled me in, the incredible complexity and depth, that tobacco and mineral and mocha thing — from then on I just had to know where those flavors came from.” That led to research, tasting and a growing fascination with winemaking, a fascination that ultimately led to the real deal.

He bought grape concentrate, yeast and a couple of carboys from a local home brewing/winemaking supply store. “I got Cabernet Sauvignon and Merlot because I wanted to emulate the Bordeaux style.” The result? “It was awful,” he laughs, grimacing. “It was bad, flawed wine, reeking of H2S (hydrogen bisulfide, which renders a distinctly sulfurous aroma). I now know how to correct that problem, but at the time, the only option was to dump it all down the drain.”

McNeilly continued to work in the industry at both the winery and wholesale level for years. But he would give up the proverbial “day job” to focus exclusively on becoming the proprietor, winemaker, president of marketing, operations, finance and sales, as well as truck driver and cellar worker for one employer — Mark Ryan Winery. 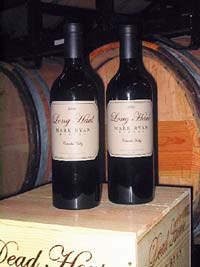 As local as it gets

In 1999, McNeilly was able to get a small allocation of grapes from Ciel du Cheval, one of Washington’s premier vineyards. Still focusing on a Cabernet/Merlot blend, he and a friend made four barrels of wine (1,200 bottles) that year, aging them in four French oak barriques.

With new oak barrels costing $600 dollars each, and the price of Cabernet and Merlot grapes from prime vineyards like Ciel du Cheval in the neighborhood of $2,000 per ton, it was an expensive fascination — with the first revenue still years away. In 2000, Mark Ryan’s production grew to 16 barrels (400 cases).

How does a start-up operation with little track record or capital procure some of the most sought-after grapes in the state? Through that time-honored, most sustainable of business practices, the handshake, Mark built relationships based on trust, respect — and cash on the barrelhead. The 2000 vintage was released last fall, the winery’s first “official” commercial release, from which two wines, both received enthusiastically by consumers, critics and cognoscenti alike, were produced.

How are sales? McNeilly says at the current pace, he’ll sell out the 2001 vintage of Dead Horse and Long Haul before the release date. The start-up grows up.

Sustainable? You bet — in five years, the winery has grown from a one-barrel, garage-based pastime to a full-time job, providing a viable, classic farm-to-market economy — with rosy prospects down the road. Meanwhile, the winery moved to a bigger garage in Bellevue and now functions as an exquisite exercise in space management. The search is on for more commodious and sustainable quarters.

Four releases of the 2001 vintage are imminent: Long Haul, a Bordeaux-style blend named for the long drive over Snoqualmie Pass, hauling grapes from vineyard to crush in a battered Ford F-150; Dead Horse, a similar blend, its name a play on words referring to its vineyard designate (Ciel du Cheval means “Horse Heaven”); Gunmetal — “I just liked the name”— produced from Conner Lee Vineyard fruit; and Badlands — “It takes a bad land to make good Syrah” — a blend of Syrah and Petite Verdot.

Talking with McNeilly, it’s evident a profound love for wine fuels his engine. Achieving sustainable financial goals are a means to the end of making the wines he envisions, rather than the wine serving as the ticket to financial aims.

His excitement is readily apparent when he talks about Washington’s potential for producing world- class Bordeaux-style wines and what he’s trying to express in his bottlings. He’s firmly committed to allowing the unique terroir of each vineyard to speak in the four designates he produces, believing that each marries especially well with Bordeaux varietals (as well as Syrah) in the Columbia Valley.

“I still don’t really know how to make wine,” he says as he assesses and appreciates a glass of another winemaker’s Syrah. Amazing modesty from one whose wines show a considerable talent. Fortunately, his learning curve should equate to pure hedonism for lovers of great Washington wine.

The skinny on low carb diets

Look for signs to protect salmon from pesticides