Look for signs to protect salmon from pesticides

This article was originally published in June 2004 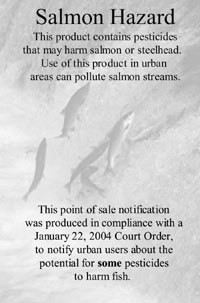 (June 2004) — In January 2004, Seattle District Judge Coughenour made a landmark ruling that established no-spray zones along salmon streams to protect salmon from pesticides. His ruling, however, was not limited to buffers. He also ordered a consumer education measure to reduce pesticide pollution. Starting April 5, retailers were to provide consumers with warnings alerting them that certain products may be hazardous to salmon.

Environmental and fishing groups, however, have found the pesticide industry has failed to carry out the judge’s order effectively. The industry did distribute the warnings to retail stores as required, but they did not provide sufficient information for stores to use the notices correctly.

Groups including the Pacific Coast Federation of Fishermen’s Associations, Washington Toxics Coalition, and the Northwest Coalition for Alternatives to Pesticides are now asking Judge Coughenour to require CropLife (an industry group) and the Environmental Protection Agency to provide retailers with sufficient information to post the warnings for consumers.

When you visit a lawn and garden retailer, ask the manager to ensure the pesticide warnings are posted. Retailers should have received a package from the EPA in April containing the notices with a graphic of salmon.

The notices are required to be affixed to shelves for pesticides containing the following ingredients: 2,4-D; carbaryl; diazinon; diuron; malathion; triclopyr BEE, and trifluralin.

Reclaiming our roots through urban farming