Letters to the editor, February 2004

This article was originally published in February 2004

I was delighted to read the article, “Pacific Foods: A Northwest Promise of Freshness,” (Sound Consumer, January) because it highlighted the company’s efforts to become “environmentally neutral.”

As a former cost accounting teacher, my students and I discovered many smart companies that were also making such efforts. One of them, a winery that makes the Bonaterra brand (which PCC carries) also has a fascinating story that might be an interesting future article for a Sustainability Profile. Keep up the good work.
— Ann Dawson

In the January issue of PCC Sound Consumer, I read again about the possibility of Wal-Mart going in next to Shipley Fields and it made me shudder.

I would like to encourage the Sequim First community group, and indeed, the people of any town that has the specter of Wal-Mart looming over it, to read and put into the hands of their city council members and other people, as appropriate, a small and very readable book called “How Wal-Mart is Destroying America and the World and What You Can Do About It,” (ISBN 1580082319) by Bill Quinn. See Amazon.com for more information.

I feel it may be in their best interest to read it before any final decision is made to allow Wal-Mart into their community. Wal-Mart tried to get into Gig Harbor, Washington; Lake Placid, New York; and a city in Massachusetts and was defeated. It can be done.
— Virginia Southas, Bellevue

Jody Aliesan, Director of the Farmland Fund: Yes, the Sequim City Council was sent a copy of that important book along with many other articles and web links. Sequim’s local newspaper came out against Wal-Mart and the majority of letters to the editor were against development.

The council members know what’s happened to other communities, but 1) they appear to think Sequim will be an exception, or 2) they don’t care.

The Council already has made its decision to welcome Wal-Mart. Now its decision is being appealed by the local community group, Sequim First, which is demanding a legally required environmental impact statement. The final hearing is February 27. Sequim First can use donations for their legal costs. Their address is P.O. Box 431, Sequim, WA 98382, 360-460-4016. Thanks for your concern.

The PCC Farmland Fund is a community supported non-profit land trust independent of PCC Natural Markets. It relies on contributions from individuals, families and businesses to save farmland from development by whatever means necessary, including participating in efforts such as this one led by Sequim First. 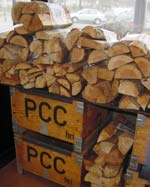 For the most part, we are pleased with PCC’s efforts to not sell toxic, dangerous or harmful products. However, we are saddened to see that PCC stores sell a seemingly benign product that is actually a major source of toxic pollution: firewood.

EPA research suggests that the lifetime cancer risk from wood stove emissions may be 12 times greater than from cigarette smoke. Wood stoves are the second highest source of cancer risk from air pollution, right behind diesel exhaust. In many residential Seattle-area neighborhoods, smoke from wood burning contributes over 80 percent of the air pollution in the winter. Wood smoke is also proven to cause respiratory diseases in children.

The Puget Sound Clean Air Agency (www. pscleanair.org) has much more information about the dangers of wood smoke, dangers that are largely unknown by those who routinely use their fireplaces and wood stoves.

PCC does not sell cigarettes or other toxic products and we feel strongly that it should not sell firewood that contributes greatly to local air pollution.
— Tracy Hendershott and Greg Slayden, Kirkland

Editor: PCC’s firewood supplier says the way he dries the wood reduces emissions to a minimal level. Nonetheless, PCC buyers agree with your concerns about health and the environment. You raise some good points and they’re sincerely considering your suggestion.

Jan Thompson, Deli Merchandiser: The only halvah we sell now is Madagascar. It has no hydrogenated oil in it; the ingredients are sesame seeds and sugar.

I am sending this to you because I know PCC is taking an active role in the GM (genetically modified) food issue.

The hottest item I have come across lately is the treatment of GM food dangers by Jeff Smith (in his book), “Seeds of Deception: Exposing Industry and Government Lies About the Safety of the Genetically Engineered Foods You’re Eating.”

Not that I am new to this issue, but after hearing him interviewed on the Art Bell program, I was ready to march down to my senator’s office and demand legislation, at a minimum, to label GM content of food. Boy, was I shocked and dismayed by what I heard, perhaps more than with the fluoridation issue.

I would sure like the Seattle schools to stand up and require GM-content-free food for the meals they serve our children. Perhaps PCC could help promote that. What other action are you taking lately?
— Russ Hamerly, Boeing IT Services

Editor: See Insights by Goldie for what you can do to influence school food choices.

I live 30 miles away from the closest PCC. There are no large natural foods stores in the area. I’m wondering if there’s interest in a store in Snohomish County, possibly in the city of Snohomish or Monroe. Thanks!
— Debbie Thrush, Sultan

Randy Lee, Chief Financial Officer: PCC has no plans to open any new stores in 2004, as we’re focusing on remodeling the Kirkland and View Ridge stores. But management always is looking for good sites in areas that will make a store successful. We haven’t looked as far out as Snohomish or Monroe, but we continue to get requests such as yours from the Sno-King county line and from parts south of Seattle, too.

I wanted to suggest that you try to work with Stiebrs Farms to get them to sell you eggs in bulk. It seems very wasteful to throw away a cardboard carton every time you buy eggs. If it is a question of health department rules re: hygiene, then I’d suggest selling plastic, washable egg cartons.

I’d also like to see PCC commit to selling only local eggs. I think I’ve seen PCC selling organic eggs that are cheaper than Stiebrs that came from faraway places like Texas and California. While they may be cheaper, they actually “cost” us a lot of pollution and resources depletion that we could avoid by eating from our own bioregion.

I think PCC can and should distinguish itself from Whole Paycheck by being a greener grocer.
— Donna Schaeffer

Editor: Our grocery merchandiser confirms that most PCC eggs are locally produced. The only exceptions are the Omega-3 eggs (organic and non-organic) from Chino Valley Ranchers in California; these eggs are unique because they contain a higher omega-3 ratio gleaned from a particular feed. We don’t sell eggs from Texas, but we do sell an egg substitute produced in Texas because it’s the only one available to us.

Regarding our bulk eggs, they do come from Stiebrs. You’re welcome to reuse your own carton for purchasing bulk eggs (for a 5-cent rebate, tell your cashier).

I understand that articles in the “Body and Being” supplement (inserted into Sound Consumer) are provided by (vendor) authors rather than staff. I would hope, however, that for the sake of balance, you might solicit articles presenting the more conventional side of a recurring topic, homeopathy. UW has a medical school and surely someone there would be willing to write a short article for you.

The reason I believe there should be some balance among articles is because there is none within articles — I refer specifically to the article by Pugnetti-Boiron appearing in the most recent issue. Pugnetti-Boiron discusses a very specific study on the efficacy of a homeopathic flu remedy, but when I got to the end of the line expecting a citation of JAMA or Lancet or the like, I found no reference at all. No way to judge for myself why this study, in contrast with many others over the years, shows that homeopathy actually works. Or, in fact, if the study even showed that, for all I know, 63 percent of the homeopathically treated patients did improve in two days, but 75 percent of placebo patients did, too. This is an example of the misleading way in which the article is written.

More importantly, however, is the implication that the FDA regulates homeopathic drugs the same way as other drugs. It does not. There are no safety or efficacy tests of homeopathic drugs, the way there are of conventional drugs (see www.fda.gov/cder/Offices/Compliance/policyGuides.htm).

I don’t ask that PCC stop discussing homeopathy because you won’t, and it makes a bit of money selling such remedies. I do, however, ask that you present conventional medical wisdom alongside alternative therapies, so that your readers understand the issue has not been decided.

At the very least, please inform them of the American Medical Association’s official word on the matter (of homeopathy, as well as acupuncture, etc.): “There is little evidence to confirm the safety or efficacy of most alternative therapies.” (www.ama-assn.org/ama/pub/article/2036-2432.html)
— David Syphers

Editor: You make some good points. You’re correct that homeopathy is not regulated in the same way as the allopathic drug industry. And we agree homeopathic study models are problematic.

As for providing the AMA’s point of view, PCC recognizes that readers may employ allopathic and/or homeopathic remedies, depending on the health issue at hand. The Body & Being insert is meant to explore natural solutions to health and well being.

Store awnings win award, Talk to the board, Board of Trustee meetings, and more