This article was originally published in July 2003

PCC features a simply stated sign in 1969 at the first Ravenna storefront.

(July 2003) — This month we celebrate 50 years of PCC history. It’s a time to reflect on our roots, appreciate the journey, laugh at some of the struggles we have overcome and congratulate each other for being a part of it.

As PCC members and shoppers, you contribute to our success and sense of community by volunteering your time and talents, remembering to vote in PCC elections, writing letters, keeping us on our toes, or just seeking out produce from your favorite farmer in PCC produce aisles. Thank you!

PCC’s early days
The seeds that would grow into PCC were planted in 1953 when John Affolter started a food-buying club to serve members of his cooperative housing association. In February 1961, Puget Consumer’s Co-op was officially born when 15 members of the buying club purchased the inventory and equipment for $179 and hired John Affolter as the manager. Operations continued to be run out of the Affolters’ basement in Renton, which became known as “the depot.” 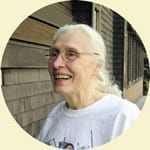 Elaine Stannard was PCC member number four and today is a regular shopper at PCC West Seattle. In the early days, she spent some time in the Affolters’ basement with her two daughters packaging bulk foods for the co-op. Most help at the depot came from teenagers of member households who traded their labor for groceries. Inventory included bulk grains, a variety of dried beans, honey and railroad-damaged canned goods. There were no perishables.

“Organic was always preferred, but in those days, very little was available,” Stannard says. “Occasionally we would get carrots, potatoes, beets, onions, oranges or seasonal apples but none were year-round.” She adds, “Either what we wanted was there or it wasn’t there. Kids working in the depot would let you know when something new came in.”

As the co-op grew, most sales consisted of phoned-in orders that Affolter would drop-off at “stations” (members’ front porches) in the Seattle area. Inventory grew and a 66-page catalog of PCC products for delivery patrons was issued in 1965 when PCC had 211 members. In 1967, the Affolter’s basement depot was shut down by the Health Department and stations were closed due to neighborhood traffic complaints.

PCC soon moved into a storefront in Madrona, where it served 340 members for two financially challenging years with a string of temporary managers. Conflict arose between older members who joined for economic reasons and newer members who wanted more in-store service. Elaine Stannard thinks back, “It’s a miracle that PCC survived!”

The sprout begins to shoot
As the co-op brought in more natural and organic foods, there was a pull to move northward toward most of PCC’s member base near the University District. In 1969 PCC moved to its first Ravenna location, current site of The Yoga Center at 2261 N.E. 65th Street. In 1970, Randy Lee became PCC’s manager. By the end of 1971, sales had jumped to $541,000. (Today, Lee is PCC’s Chief Financial Officer.)

Membership and the demand for natural, organic foods increased rapidly, and the question of PCC’s expansion was in constant discussion. Members and staff were concerned about the largeness of a potential new location just up the street on the corner of 65th and 20th, the site that was to become in 1976 what most people now remember as the Ravenna store.

Concern also arose about the proposed use of “modern complex machines.” Staff was accustomed to manual cash registers with round keys that rang bells and sent flags up with numbers on them. Moving to electronic cash registers and automatic doors were both controversial changes.

A vote was put to the membership in November 1977 on whether to ban the sale of refined sugar at PCC; shoppers voted to keep the sweets. In the midst of the healthy debates, membership and sales doubled and the staff tripled. In 1978 PCC took Co-op East under its wing, which became PCC Kirkland. Ravenna had become so crowded that new membership at the Ravenna store was closed for two years. By April 1979, there were 3,575 PCC member households. In 1980 the first PCC Greenlake store opened at the corner of 66th and Fremont Ave. N.

This endearing vintage clipping is from a purple-mimeographed August 1966 issue of the “Puget Consumers Co-op Bulletin.

The market for natural foods continued to blossom, as did PCC — albeit with a few growing pains along the way. With three stores, the PCC Board of Trustees soon discovered that a general manager was needed to keep things running smoothly. PCC’s first general manager was hired in 1982. In the next few years, staff at Kirkland and Greenlake unionized as part of Retail Clerks Local 1105.

Members put an initiative on the ballot opposing a meat counter in Ravenna although a meat department already existed in our Greenlake store. The initiative was defeated. A plan was implemented for further expansion of PCC with three new stores: Seward Park (1985), View Ridge (1987) and West Seattle (1989). By 1990 sales were more than $500,000 per week and PCC employed 200 people.

Companion planting
Concurrent with growth, PCC steadily spread its roots into community life as well. In 1973 PCC started the P-Patch program with the vision of Darlyn Rundberg and the management of Koko Hammermeister. Likewise, PCC has been an active supporter of Seattle Tilth and its mission since its inception in 1978.

Goldie Caughlan, PCC’s nutrition educator, joined as a member in 1973 and became a member of the PCC Board in ’74 for two terms. From the beginning, she has been a voice for education and political activism. In 1976 Goldie initiated natural food fairs attended by thousands of people. “People are sick of the Betty Crocker mentality,” she said. “A lot of nutrition information is not going to come from the top down but from people who’ve learned from teaching other people.”

She has faithfully carried that torch for 25 years now. In 1983 she started the PCC FoodWorks program, which today offers more than 400 cooking and wellness classes and lectures each year at classrooms in the Greenlake, West Seattle and Issaquah PCC stores. Goldie also spearheaded the letter-writing campaign when the proposed USDA organic standards were released for comment in 1998. PCC members wrote 7,000 of the 300,000 letters received.

The controversy between expanding and staying small has been a healthy debate among PCC members for five decades. One facet of our growth that most members can agree about has been our desire and ability to support local farmers with a guaranteed market for their harvest over the years. In March 1975, a notice appeared in the PCC newsletter, “We’re starting a file on all you local, organic growers out there. If you are interested in selling sizeable and steady amounts of produce this year, we’d like to hear from you.”

Some local farmers have literally grown up with us. Gene Kahn, founder of Cascadian Farm, started out by delivering his produce to the 65th Street PCC in his van. Current farmers Mark LaPierre, Scott Leach, Berryman Orchards, and the folks at Rent’s Due Ranch have been our friends and partners for more than a decade. PCC has a direct delivery program with each of these farmers, creating a symbiotic circle including a sustainable livelihood for farmers, a guaranteed supply for PCC, and the appreciative demand of PCC shoppers.

When some dairies began using growth hormones in production, PCC provided a letter of credit to a group of local dairy farmers who wanted to go organic. In 1994 there were no organic dairies in Washington State now there are 13. Similarly, we have offered a stable market for organic egg farmers, natural meat producers and sustainable fisheries over the years.

New era, new image
Times have changed for the natural foods industry. More and more Americans are seeking out organically grown and natural foods, encouraged by personal health, culinary interests or a concern for the environment. This influx of new consumers has led to the demands that challenge us as a co-op.

In 1998 Puget Consumers Co-op began doing business under the name PCC Natural Markets — still very much a co-op, but with a moniker that indicates to the general public that our business is about food. In 1999 we opened the doors of our PCC Issaquah store to both long-time commuting members and to a new audience full of questions and curiosity. PCC now has more than 36,000 active members and employs 620 people.

Planting a seed for tomorrow
In September 1999, PCC dedicated five percent of one month’s produce sales to protection of farmland and created the PCC Farmland Fund. Since then, PCC has been first among corporate sponsors of the Fund — now an independent, community-supported non-profit land trust working to save farmland from development and keep it in organic production. Most donations to The Farmland Fund are personal contributions from members of PCC. We’re tasting the second year of produce from the Delta Farm, the first farm rescued by the Fund. Three young farmers are working the farm under the guidance of Nash Huber.

We are thankful you are a part of the PCC community because collectively, we can make a change for the better. As the largest natural food retail co-op in the nation, PCC has the privilege of having a large, dedicated customer base. We also have the responsibility — to our members, farmers and other food co-ops — to take this privilege seriously.

We are looking ahead to future generations, working to ensure that they have a safe, nutritious, guaranteed food supply. Together, we’re able to make a tangible, hand-full-of-good-dirt difference in our region. And that is something to celebrate!