A quick schooling in eco-friendly fish

This article was originally published in April 2002

It’s the seafood lover’s Catch-22: Studies suggest that a diet rich in fish is good for you. At the same time, ecologists say the oceans are in trouble and the world’s fisheries are rapidly being depleted. What’s a concerned shopper to do?

An ambitious new alliance between PCC and EcoFish, a national seafood wholesaler based in New Hampshire, will make it much easier for PCC shoppers to deal with the complicated questions surrounding responsible seafood purchases. In fact, EcoFish may offer the most advanced sustainable seafood program in the United States, if not the world. EcoFish is doing for seafood what organic growers have done for grains, fruits and vegetables.

An evolution in PCC’s seafood policy
“By their choices, consumers can either help heal or restore the oceans, or add to their continued degradation and problems,” says Carl Safina, director of the National Audubon Society’s Living Oceans Program.

Safina, along with such leading ocean environmentalists as Rebecca Goldburg of Environmental Defense and Jason Clay of the World Wildlife Fund, serves on a volunteer panel that determines which fisheries EcoFish may work with. The panel looks at several factors when determining whether a species may be sold by EcoFish, including population status, level of bycatch (the capture of unintended species), and environmentally friendly harvesting practices.

Combine remaining ingredients to make a marinade and brush on cod. Turn fish over and repeat. Let set 10 minutes. Bake at 325°F for 15 to 20 minutes.

Thaw, clean and de-vein prawns. Sauté prawns in olive oil and garlic over medium-to-high heat for about 2 minutes, tossing occasionally. Squeeze the juice of 1/2 lemon over prawns and toss for another 30 seconds or so. Prawns should be pinkish and slightly firm. Sprinkle with minced parsley and serve.

— Recipes by Kate, Raquel, Mark and Tim of the View Ridge PCC deli

“PCC shoppers should gain a great deal of peace of mind from this program,” says EcoFish CEO Henry Lovejoy. “There’s an awful lot of confusion in the marketplace about sustainable seafood, and that is now totally removed from the PCC shopper. We’re doing their homework for them.”

Lee Pate, PCC’s Meat Merchandiser, agrees. “This program has a great deal of integrity, and customers will know that they’re buying the highest quality, sustainable fish. In the past, PCC has never really had a coordinated seafood program — we struggled to find a wholesaler that could guarantee a wide variety of responsible seafood. It was purchased from many different suppliers, with a lot of different standards.

“EcoFish ties everything together very nicely for us. Now, all seven of our stores will be able to offer seafood with consistent pricing, quality and supply — all from a strong environmental source. EcoFish is supplying us with restaurant-quality seafood, and we’re able to sell it at a very competitive price.”

Organic foods have been booming for more than a decade, with sales growing 20 percent per year. Sustainable seafood, many believe, is a market that is waiting to blossom, as people start to bring an organic ethos to their seafood purchases.

Many top restaurants are heavy purchasers of organic foods, because they know the quality and taste of organic produce are hard to beat. Likewise, some of EcoFish’s top customers are restaurateurs, who know there is a big difference in the quality of seafood from small hook-and-line fishermen compared to seafood from huge commercial operations.

“EcoFish is the only place that makes an effort to provide environmentally sound fish,” says Nora Pouillon, chef and owner of the highly acclaimed Washington, D.C. organic eateries, Restaurant Nora and Asia Nora. “You can trust them. You don’t have to ask a million questions about where the fish comes from.”

“The quality of the seafood that EcoFish supplies is some of the best available in this country,” adds Ann Cooper, executive chef of The Ross School in East Hampton, N.Y., and the author of “Bitter Harvest: A Chef’s Perspective on the Hidden Dangers in the Foods We Eat and What We Can Do About It.”

Military technologies leave fish no place to hide
Just how bad is the world’s seafood situation? Pretty bleak, according to many experts. Susan Boa, spokeswoman for the Seafood Choices Alliance, says fish are losing the battle. More than 100 species in U.S. waters are overfished and may face extinction, she says.

Nearly 70 percent of the world’s commercially fished species have reached or passed their limits of being able to sustain themselves, according to Environmental Defense. Between 1950 and 1994, the world’s ocean fishermen increased their catch by 400 percent, and doubled the number of boats.

Meanwhile, as fishing stocks dwindle around the world, giant fishing companies are employing the latest technologies to delve deeper into the world’s oceans. The peace dividend resulting from the end of the Cold War has been used to transfer military technologies to commercial seafood purposes, according to the non-profit group, SeaWeb. These technologies include sonar mapping systems that enable fishermen to penetrate deep into regions that once were considered too difficult to fish. Boats also are beginning to use heat and depth sensors, as well as satellite images that show water temperatures capable of revealing where certain fish are most vulnerable, to trawl for fish.

“As the shallow water fisheries everywhere have collapsed, there has been a worldwide scramble to exploit the resources of the deep ocean, with devastating consequences,” Harvard University ocean ecologist Callum Roberts says. “Forty percent of the world trawling grounds are now in waters deeper than the continental shelves. And some new technology is so efficient that these deep-sea trawlers are not just harvesting fish, they are literally mining them.”

A model for the rest of the country
In big business fishing, a third of the catch may be bycatch — that is, fish and other marine life that are not intended to be caught. Lovejoy says that the average bycatch among the fisheries EcoFish works with — mostly small-scale hook-and-line operations — is about 1 percent.

EcoFish also refuses to do business with ocean pen-raised seafood. The company does offer three types of farmed fish: catfish, trout and tilapia, from Arkansas, Idaho and Ecuador, respectively. But all three are raised naturally — without the hormones and antibiotics fish farms often use — in closed land-based systems designed to prevent their escape into the wild as well as water pollution. 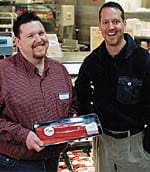 Most of the seafood carried by PCC will carry the EcoFish label. However, some seafood products, such as smoked salmon, will come from other brands that are committed to sustainability.

EcoFish plans to donate 25 percent of its pretax profits to conservation efforts.

Pate hopes that the PCC program will be so successful that it will serve as a model for grocery stores and natural food markets across the country.

“Our goal is to be a solution for stores that are struggling with these sustainability issues,” adds Lovejoy. “Not only are we helping produce a product line that will be profitable for the stores, our goal is to demonstrate to the rest of the seafood world that you can have a sustainable seafood program and be successful doing it.”