The Biden administration is scrapping old-fashioned incandescent light bulbs, speeding an ongoing trend toward more efficient lighting that officials say will save households, schools and businesses billions of dollars a year. Rules finalized by the Energy Department will require manufacturers to sell energy-efficient light bulbs, accelerating a longtime industry practice to use compact fluorescent and LED bulbs that last 25 to 50 times longer than incandescent bulbs. The rules are projected to cut planet-warming carbon emissions by 222 million metric tons over the next 30 years, an amount equivalent to emissions generated by 28 million homes in one year, officials said. (NPR.org)

For a brief period (one) Saturday afternoon, renewable sources provided nearly all of California’s power: Wind, solar and other emissions-free technologies met a record 99.87% of California’s total 18.7 gigawatts of energy demand, according to a spokesperson for California Independent System Operator, the nonprofit group known as CAISO that oversees the Golden State’s power grid. And as the numbers inch toward 100%, environmental advocates say it could soon be possible for clean energy to meet all of California’s electricity demand on a daily basis. Tom Athanasiou, executive director of the activist think tank EcoEquity, called the record “unambiguously good news,” although he stressed the need to ensure that all Californians benefit from reduced reliance on fossil fuels. (Grist.org)

A NASA climate research scientist who has spent much of her career explaining how global food production must adapt to a changing climate was awarded the 2022 World Food Prize. Cynthia Rosenzweig, an agronomist and climatologist, was awarded the $250,000 prize in recognition of her innovative modeling of the impact of climate change on food production. Rosenzweig, whose win was announced during a ceremony at the State Department in Washington D.C., said she hopes it will focus attention on the need to improve food and agricultural systems to lessen the effects of climate change. (WNYT.com)

The Seattle restaurant community mobilized and helped save the landmark culinary school at Seattle Central College from the budget chopping block—along with the maritime, wood technology, and apparel and design programs—for the moment, at least. Details emerged in April that a budget committee for public Seattle Central was expected to recommend permanently cutting the Seattle Culinary Academy. Instead, the college has now announced that it will continue enrollment through fall 2022 and—it is hoped—going forward. (SeattleTimes.com)

Washington’s soil health initiative started to amalgamate in 2019, and with full funding of $2.1 million a year coming online last year, the state entered into a dramatic paradigm shift in the resources it invests in soil health research, outreach and incentive programs. Virtually overnight, the effort places Washington state as one of the preeminent leaders in state-supported soil health activities. The Washington state soil health roadmap, available at: pccmarkets.com/r/6170, is a document with over 100 pages outlining what we know about soil health in the state’s 14.6 million acres of agricultural land and what we hope to learn through this project. (GoodFruit.com)

Black farmers in the United States lost roughly $326 billion worth of acreage during the 20th century, according to the first study to quantify the present-day value of that loss. Land loss is a contributor to the racial wealth gap in the United States and an issue that has marred the relationship between the U.S. Department of Agriculture (USDA) and minority farmers. “Wealth and land is one way in this country that you’re able to grow opportunity for your family,” said Dr. Dania Francis, professor of economics at the University of Massachusetts-Boston and lead author of the study published in the American Economic Association’s Papers and Proceedings journal. (Reuters.com) 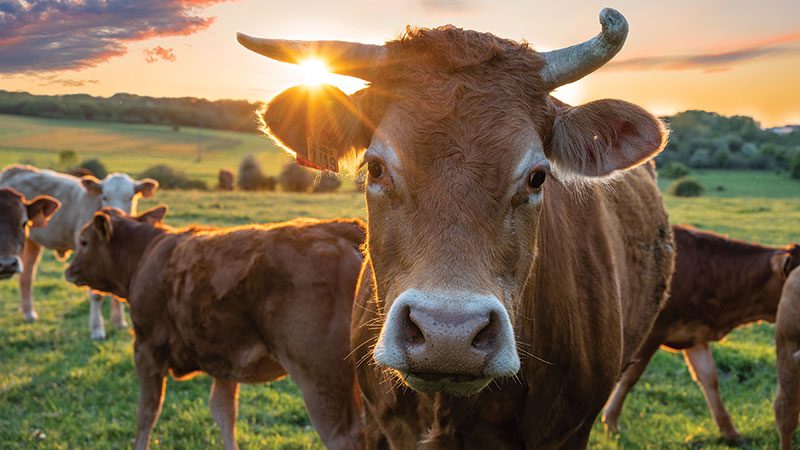 Audubon will formally launch its “bird-friendly beef” campaign at the national level, offering its seal of approval to cattle ranchers who can prove their methods will bring the birds back. Historically, U.S. wildlife conservation efforts have focused on preserving habitat. But Audubon’s new strategy is specifically geared toward improving the environmental value of working lands, implying that “nature” and “agriculture” are not mutually exclusive entities. (TheCounter.org)

Foreign investment in U.S. cropland has nearly tripled in the past decade, according to USDA data. The total cropland controlled by foreign interests in 2020 was 10.9 million acres, up from 4.1 million acres in 2010. This increase has been largely driven by foreign-owned wind companies signing long-term leases on a large number of acres, according to USDA. (InvestigateMidwest.org)

A protein that allows the fungus that causes white mold stem rot in more than 600 plant species to overcome plant defenses has been identified by a team of USDA Agricultural Research Service and Washington State University scientists. Knowledge of this protein, called a SsPINE1, could help researchers develop new, more precise system of control measures for the Sclerotinia sclerotiorum fungus, which attacks potatoes, soybeans, sunflowers, peas, lentils, canola, and many other broad leaf crops. The damage can add up to billions of dollars in a year of bad outbreaks. (ars.usda.gov)

Microplastics can pick up pollution in their travels and pose an even greater threat to human health, according to a new study. In the ocean, for example, toxic compounds can hitch a ride on plastic and make the material 10 times more toxic than it would normally be, according to the research published earlier this year in Chemosphere. Although the dangers of both microplastics and harmful compounds have been studied individually, few researchers have looked at their combined effect. (ehn.org)

The Yakima City Council is moving forward with a new board called Sustainable Yakima to help improve the city’s sustainability efforts and address the adverse effects of climate change. Community members are preferred—but not required—to have experience or expertise in a related field, such as energy management, water conservation, solid waste management, climate science or forestry. Sustainable Yakima will be tasked with creating a Climate Action Plan within its first year, the council decided. (YakimaHerald.com)

At the public library in Mystic, Connecticut, a card catalog that formerly stored book due dates now holds endless packets of seeds. There’s eggplant and kale, marigolds and zinnias; more than 90 different types of seeds available for anyone with a card to take home and plant. The seed library in Mystic is just one of a number that have sprouted up around the country over the last decade—including in Georgia, California, Colorado, Arizona and Maine—as libraries turn to seeds to help them meet the daily needs of the communities they serve in new ways. (CivilEats.com)

Agriculture Secretary Tom Vilsack planted a tree earlier this year to announce the reopening of USDA’s People’s Garden Initiative. People’s Gardens across the country will grow fresh, healthy food and support resilient, local food systems; teach people how to garden using conservation practices; nurture habitat for pollinators and wildlife and create greenspace for neighbors. The garden at USDA headquarters in Washington, D.C. will be joined by 17 flagship gardens located in urban communities nationwide, including one in Portland Ore. (usda.gov)

When you see the claim “Raised Without Antibiotics” on a package of beef, you expect just that—the cattle weren’t given antibiotics. But a study in the journal Science suggests that may not always be the case. Researchers at George Washington University and Food In-Depth, a company that’s developed antibiotic tests for livestock, tested urine samples from 669 cattle raised under a “No Antibiotics Ever” program overseen by the Department of Agriculture. They found that 15% tested positive for at least one antibiotic. (ConsumerReports.org)

According to a study conducted by University College London (UCL), the combination of rising temperatures due to climate change and land-use changes are directly linked to widespread losses in insect species around the world. The study, published in Nature, found that changing temperatures and “intensive agricultural land use” in the most impacted parts of the world (tropical regions, according to the research) are already responsible for a reduction in insect numbers. In areas with both high-intensity agriculture and substantial temperature increases, researchers found the number of insects was 49% lower than populations in natural habitats in areas without notable climate warming. (ModernFarmer.com)

Americans are recycling far less plastic, according to (a recent) analysis, with rates falling below 6% in 2021. The research from Beyond Plastics and the Last Beach Cleanup aims to shed light on the state of recycling in the United States given a delay in federal reporting. Drawing on the most recent U.S. Environmental Protection Agency data available and last year’s plastic-waste exports, the new report estimates that Americans recycled 5 to 6% of their plastics, down from 8.7% in 2018. (WashingtonPost.com)

Fast, fun stir-frying with J. Kenji Lopez-Alt and “The Wok”

“Culinary nerd” J. Kenji Lopez-Alt has brought the science of great cooking to readers for years. His latest book, “The Wok: Recipes and Techniques” is a definitive guide to the phenomenally useful cooking tool.

How to live gluten-free, joyfully

Shauna James Ahern, the original Gluten-Free Girl, has advice for living gluten-free and a savory recipe.