Bakers get “breader together” for area food banks 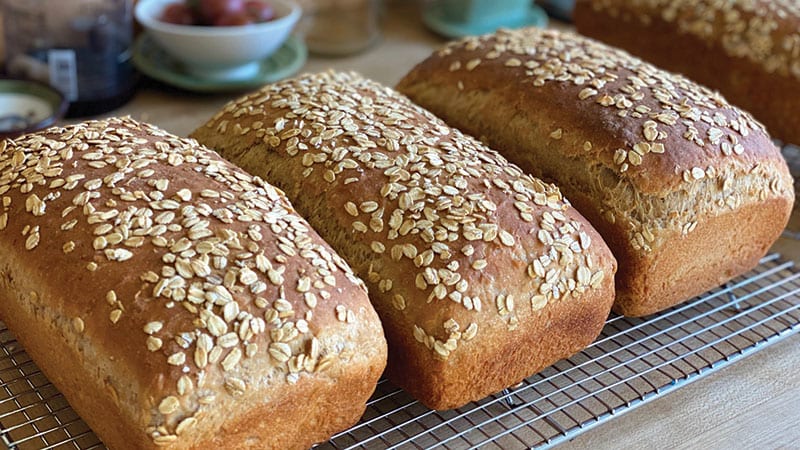 After the early months of the pandemic, as uncertainty became the only certainty, I hunkered down at home and, like many, used baking as an escape.

With social distancing a call to arms, “Social Butterfly” my middle name and social media my constant companion, I was starved for connection.

Turns out many of my friends and acquaintances were suffering from the same malady. Unlike me, though, some of them were devising ingenious and very personal ways to bridge that social distance: Lending their assistance to food banks.

One pal, a prolific gardener with 40 extra tomato starts, offered to deliver her plants to fellow gardeners in exchange for cash donations. She then shared the proceeds among food banks in Ballard, Rainier Valley, the Central District and the University District.

Another, spurred by the Black Lives Matter movement, spent her $1,200 COVID-19 “relief check” on a stack of yard signs that read “JUSTICE.” Trading signs for donations, she parlayed her unanticipated check into a $5,000 donation to the Edmonds Food Bank.

But it was “breaducator” Katherine Kehrli who helped me—and scores of other home bakers throughout Puget Sound—reach into something far more personal than our wallets: our ovens.

Kehrli, associate dean at Seattle Culinary Academy, is the mastermind behind the Northwest Bread Bakers and what is now known as the Community Loaves project, a growing brigade of baking enthusiasts whose mission puts freshly baked honey-oat bread into the hands of those who need it most.

“It’s a bread donation in every sense of the word,” she says of the volunteer army that purchases ingredients, bakes twice monthly, then drives their bounty to one of 30 (and rising) neighborhood hubs, now including my own Edmonds home. From there the loaves are hauled to Kirkland’s Hopelink warehouse, relay-race style, by hub coordinators and fellow volunteers. Hopelink, a PCC food-bank partner serving homeless and low-income community members for 50 years, distributes the loaves twice monthly at its regional food pantries, and work is underway to expand Community Loaves to other food banks, and even other cities.

“A little effort by a lot of people really can have a terrific impact,” says Kehrli. 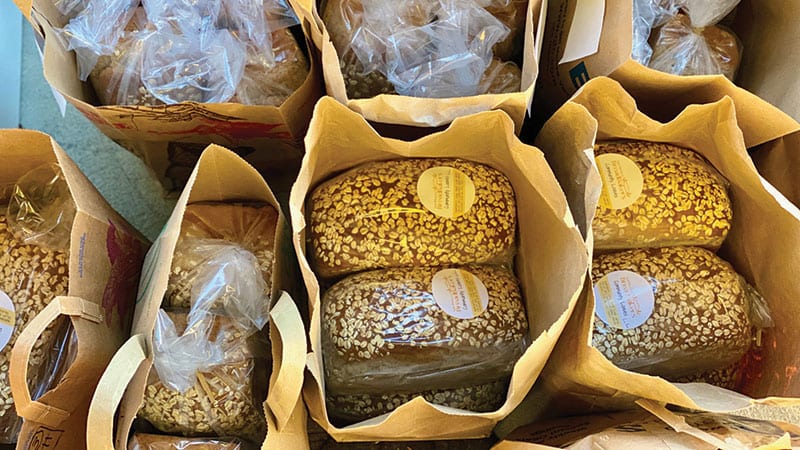 Grieved when the hospitality industry—and, by extension her culinary arts students—were hard hit in March by pandemic-fueled closures, she found herself considering ways in which she might make a personal impact. Her first thought? “I want to bake bread for the food bank.” She didn’t waste any time making that happen.

In late April, five of her friends participated, gifting 19 loaves from their quarantine kitchens. By early May, those numbers doubled. And as news got out about the project via word of mouth, social media and the press, by year’s end, 450 volunteers had collectively donated more than 8,000 loaves. Proving, as Kehrli is quick to say, “We’re breader together.”

It was that togetherness, despite being alone in my kitchen, that appealed to me as I baked my first loaves in September. By then, I had attended a Zoom orientation session along with a dozen other volunteer wannabes. Some were longtime bread bakers. Others were neophytes, and together we listened and learned as Kehrli inspired us to join her.

She explained that we’d have several versions of the honey oat bread recipe to choose from; that our flour purchases would support Northwest Bread Baker’s larger mission to use local grains; that we weren’t expected to be available for every bake (“You’re volunteers!”); and that we’d have access to supporting videos as we navigated the world of sourdough starter, levain-making, and the methodology behind the high-hydration breads that put the art in artisan breadmaking.

Another plus: while we were expected to produce at least four loaves per donation, we were encouraged to keep one to enjoy ourselves.

Prior to my first official bake, I made a test batch of two, built with an overnight levain made with sourdough supplied by Community Loaves (adding flavor and shelf-life), a porridge of sweetened oats, yeast, salt, olive oil and a mix of Trailblazer and Expresso flour from Skagit Valley’s Cairnspring Mills (see Sound Consumer article on Cairnspring).

I wish you could have seen my face as I tasted the first warm slice from a loaf—as delicious as it was nutritious—knowing that I’d be sharing a taste of (my) home with people I’d never met.

Let cool to lukewarm (100°F to 110°F), which typically takes about 20 minutes; stir the mixture several times to help things along, if you like.

Whisk together yeast and flours, then add to the oat mixture, stirring to form a rough dough. Knead (about 10 minutes by hand, 5 to 7 minutes by machine) until the dough is smooth and satiny.

Transfer the dough to a lightly greased bowl, cover with plastic wrap or a tea towel, and allow dough to rise for about 1 hour. Since the dough is warm (from the boiling water), it should become quite puffy.

Turn the dough out onto a lightly floured work surface and divide it in half. Gently press the air out and shape each into a log by rolling the dough away from you. Place the loaves in two greased 8 ½” x 4 ½” bread pans.

Cover the pans with plastic wrap or a tea towel and allow the loaves to rise until they’ve crowned about 1” over the rim of the pan. This should take 60 to 90 minutes.

Bake the loaves in a preheated 350°F oven for 35 to 40 minutes. Remove from the oven when they’re golden brown and the interior registers 190°F on a digital thermometer.

Turn out onto a rack to cool. Store at room temperature, well-wrapped, for several days; freeze for longer storage.

For a pretty final touch: Just before baking, brush the top of the loaves with an egg white beaten with 1 tablespoon cold water, and sprinkle generously with oats.

Want to get involved? Sign up with Community Loaves at communityloaves.org. Learn more about the project at Nancy Leson’s PCC cooking class here.