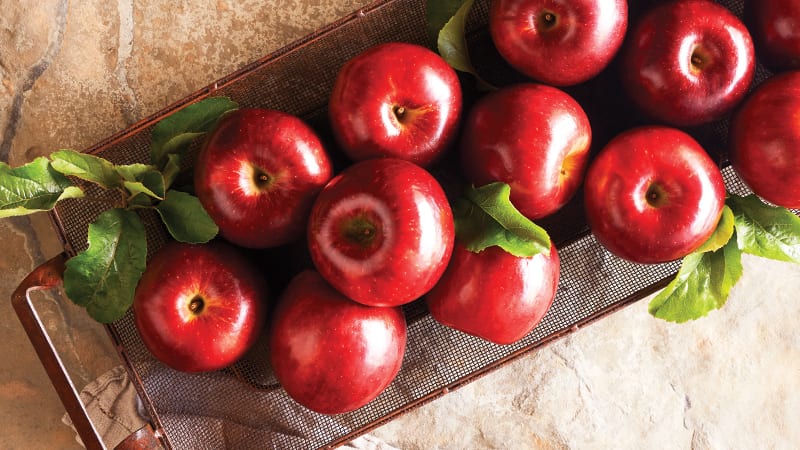 The apple known as Cosmic Crisp has a somewhat literal name. When you bite into it, even after nearly a year in storage, your teeth break into its creamy flesh with an audible snap. The reference to the cosmos comes from the apple’s still-life-red skin that is dotted with white lenticels, which a marketer decided looked like stars.

It’s no surprise that this beautiful apple, which was once known only as WA-38, has a beautiful name. Developed through traditional cross-breeding at Washington State University in a project that started 22 years ago, it made its long-awaited grocery store debut in December. If it lives up to the hopes of researchers, farmers and businesspeople over the next few years, it’ll become a superstar and a symbol of Washington state. It’ll also be another step in the industry’s transition to favoring limited-edition specialty apples that are essentially intellectual property as well as snacks.

WA-38 is a cross between an apple called Enterprise and the well-known Honeycrisp.

By all accounts, the Cosmic Crisp stores well without losing crispness, is sweet without sacrificing tartness, is slow to brown once sliced, and is on the same bloom and harvest cycle as the now less popular Red Delicious (most of which are grown in Washington). Growers can easily rip out their Red Delicious orchards and replace them with the Cosmic Crisp without needing to worry about their harvest schedules. Demand was so high among growers when the trees were made available to plant in 2017 that those first saplings were only available by lottery.

River Valley Organics, a PCC farmer in Okanogan County, Washington, has dedicated over three of their 20 acres to growing the fruit. “We hadn’t sampled it,” says co-owner Apple Otte. But she and her husband planted them anyway. “It just sounded good to us from the literature,” and the apple has been everything they hoped for. “I really think the apple is such a good apple…it’ll sell itself really.”

Proprietary Variety Management (PVM), the company handling the fruit’s debut, expected roughly 465,000 boxes of the apple would be sold in 2019. (PCC expected to receive a limited number of organic Cosmic Crisps from River Valley Organics in December, adding other suppliers when River Valley’s are gone.) Its numbers are expected to increase almost exponentially from there—17 million boxes by 2024.

But PVM isn’t leaving anything up to chance. “We want Cosmic Crisp to be the favorite apple in the country,” says Kathryn Grandy, director of marketing for PVM. Their goal is for people to know about the apple before they even walk into the produce section.

The Cosmic Crisp is a fruit that, at least for its first decade, will be synonymous with place in the same way as Champagne, Parmigiano Reggiano or prosciutto di Parma.

For the first 10 years, only Washington orcharders will be allowed to grow and sell the Cosmic Crisp. Fifty-eight percent of all apples grown in the United States come from Washington, “But we’ve never had our own apple,” Gandy says. “This is an apple that was developed in Washington state for our climate, our soils.”

That sense of place is being helped by a big marketing budget—a $10 million campaign to launch the fruit and make Cosmic Crisp what people think of when they think of the perfect apple, partly funded by WSU, which receives a royalty from each tree sold and from boxes of apples. Maybe this is what local food needs to succeed in the grocery store today. So-called “branded produce” like Cuties mandarin oranges or Cotton Candy grapes are increasingly valuable to growers and grocery stores alike, representing 38% of total produce sales according to Nielson.

Ever since the Honeycrisp exploded in popularity, so-called “club apples” have become more common. These apples, like SweeTango or Jazz, are licensed exclusively to a small group of growers. This allows for quality control, the ability to control supply and, therefore, the price orcharders get for their fruit. Since the Honeycrisp’s patent expired in 2008, allowing anyone to grow and sell the apple, prognosticators have been predicting the variety’s eventual decline. With a club apple, that’s not an issue.

When Otte and her husband purchased their orchard in 1997, the trees were mostly Red or Golden Delicious. Over time they’ve been diversifying their orchard—a few acres of pears and plenty of apple varieties to extend the harvest season.

River Valley Organics pulled out three acres of pears to make room for more Cosmic Crisp. In early October, they harvested their first crop of the fruit and set the teachers’ pet red apples aside in cold storage until they were ready to go to stores in December. The starch in the apples converts into sugar during the apples’ storage nap. “When you first pick them they have a little more tartness to them,” Otte says. “But they just get more and more sweet—and stay just as juicy.”

Whether or not the apple fulfills the stratospheric expectations around it, it’s a fitting addition to their orchard.

Tove Danovich is a freelance journalist based in Portland, Oregon.