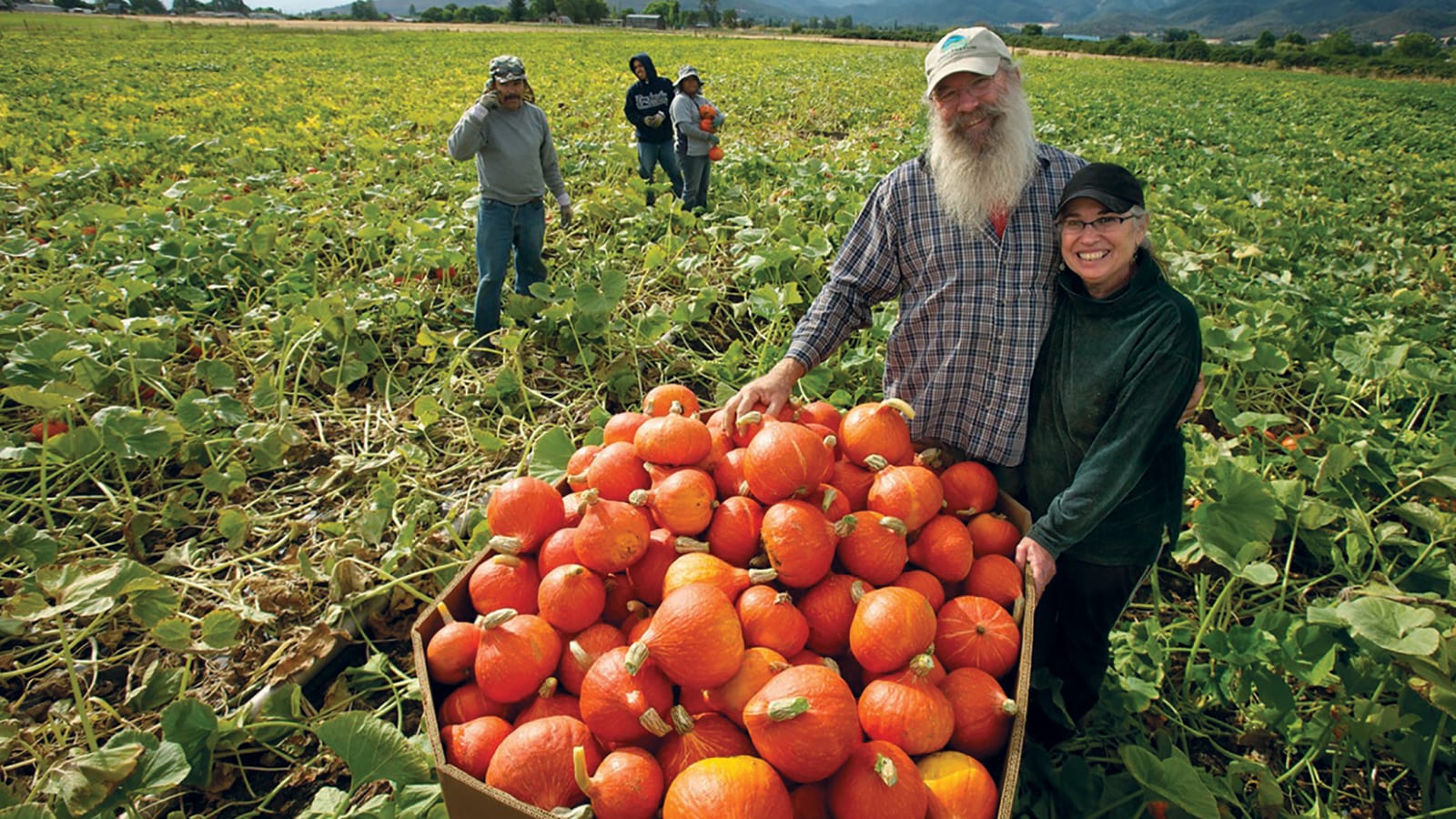 Organically Grown Company (OGC) began as a nonprofit in 1978 when a few gardeners, small-scale farmers, environmental activists and dreamers talked about a shared belief: that organic agriculture was key to nourishing healthy people and sustaining a healthy planet. Since then, OGC has been PCC’s primary organic produce supplier because its produce tastes amazing — and because we treasure OGC’s commitment to a values-based supply chain.

When you’re shopping PCC for produce this season, take a moment to notice the names of the growers. Consider sending them a note of thanks, what you love and why. Your support would be appreciated! Here are some highlights about a few of our favorites from Organically Grown Company (OGC).

Siri & Son Farms is a fourth-generation family operation that began in the 1950s. Since emigrating from Italy, the Siri family has practiced natural farming, relying on cover crops, compost, crop rotations and drip irrigation. Now Jim and his son, Joe, have taken over production. Joe brought a passion for organic agriculture to the fields, combining new and traditional techniques with organic certification. With revitalized energy, they have expanded their acreage.

Fraserland Organics is a cooperative enterprise of three farms — Camirlaney Farms, Bow Chong and Dhaliwal Farms — with 1,700 acres along the Fraser River just over the B.C. border. These three families support each other by diversifying their crops — complementing each other rather than competing. The farms are certified Salmon-Safe and participate with the Canadian Horticultural Council on Farm Food Safety, setting land aside for migratory bird habitat.

Coke Farm has grown steadily since 1981 when Dale Coke planted his first rows of organic strawberries in Aromas, California. Dale is credited as a pioneer in creating packaged spring mixes. He also was a founding member of his chapter of California Certified Organic Farms. These days, Coke Farm uses its facilities in San Juan Bautista and leverages its marketing capacity to help more than 50 small organic farmers, including many first-generation growers, find markets.

Mayra Velazquez de Leon, Organics Unlimited co-founder, is a fourth-generation banana grower and her father was the first person to market organic bananas in the U.S. By purchasing bananas from Organics Unlimited, we help support its farmer community foundation, “Giving Resources and Opportunities to Workers” (GROW). With retailer partners such as PCC, 60 cents from every case of bananas sold goes to the GROW program, funding development projects and health-related activities in banana-growing communities in Mexico and Ecuador.

At OGC, sustaining a healthy planet means as much to us as the organic produce we deliver, the green features of our facilities, and the health of our coworkers. It also is a commitment to on-farm sustainability and small and medium farm viability.

Like the original OGC farms that formed the foundation for our grower and coworker ownership model, we remain dedicated to supporting operations that have on-farm diversity, put money back into their communities, and provide better conditions to farmworkers. At the end of 2017, 46 percent of our producer-community-operated farms were 200 acres or less, and 63 percent of those were 50 acres or less.

When sourcing produce, we start with our roots in the Pacific Northwest. As winter emerges and the rain and snow arrive, our sourcing shifts south. For a few items, we work with growers in South America. Some crops, such as bananas, papayas and pineapple, come from the tropics year-round.

When we refer to local, we often mean the Pacific Northwest (PNW), a bioregion that approximates the Columbia River watershed and includes Oregon, Washington, Idaho and southern British Columbia. With some of the richest soils, a temperate climate and access to water, the Pacific Northwest is a productive and diverse growing region where farmers can produce hundreds of different crops.

It’s not uncommon for a grower to have more than 40 crop varieties growing over the course of a season.

In 2017, 31 percent of the produce cases we sourced came from the Pacific Northwest, with the majority from Oregon and Washington. Some growers include Andersen Organics in Eastern Washington, All Seasons Mushrooms in Southwest British Columbia, Denison Farms in Oregon’s Willamette Valley, Willie Green’s Organic Farm in Washington’s Skagit Valley, and Fry Family Farm in Southern Oregon.

These growers represent some of the deepest roots in our producer community and several are owners of OGC. We actively support their success through grower services, including packing supplies and backhauling crops to OGC warehouses; packing small fruit such as blueberries, cranberries and kiwi berries in-house; and the impacts of our community giving program to organizations, such as PCC Farmland Trust, Friends of Family Farms, Oregon State University Agricultural Research Foundation and the Organic Seed Alliance.

Additional efforts include a program that greatly reduces annual organic certification costs for growers — and a program that helps farmers develop tools to improve profitability.

Despite the wealth of crops grown in the Pacific Northwest, the season is not long enough to meet the year-round needs of customers.

As summer transitions to fall, we move more of our sourcing south, primarily from California and inland for a few items to Arizona, Texas, Georgia and Florida. A few tropical items come from Hawaii.

We support this producer community through partnerships and strategic opportunities. Examples include efforts on trade advocacy and participation in our biannual “Organicology Conference: The study of a Sustainable Food Future.” At Organicology, sessions often develop through consultation with our producers and include issues they’re finding the most challenging, such as a shortage in farm labor, succession planning, and being competitive in a rapidly changing marketplace.

We collaborate with specific producers when we can provide value, such as helping Deer Creek Heights Ranch secure a conservation easement to maintain the land in perpetuity and recognize a high priority wildlife corridor that runs through the property.

Coke Farm in San Juan Bautista is another we love for giving a helping hand to small farmers.

Mexico and other countries

In 2017, 15 percent of what OGC sourced came from Mexico and 1.6 percent from Ecuador. The other 3 percent of our produce with southern origins is from Chile, Peru, Costa Rica and Argentina, which enables us to provide, for example, blueberries in the offseason and pineapples year-round. Sourcing from these countries allows us to support the benefits of organic beyond our own borders.

It also allows us to partner with producers that provide better conditions for farmworkers. Key in these efforts are Covilli Brand Organics, Wholesum Harvest and Awe Sum Organics. These producers provide some of the fair-trade produce from OGC. In 2017, 5.4 percent of OGC’s sales were fair trade sourced from 14 producers in Mexico, Peru, Argentina, Chile and the U.S.

We’re especially proud of our fair labor banana program with Organics Unlimited and its community of growers in Mexico and Ecuador.

Why we do it

By purchasing organic produce, we’re able to support a more sustainable food system in each producer community we source from.

We value our role in the middle of the supply chain to serve growers, retailers and consumers. We go above and beyond traditional business transactions to develop long-term relationships and provide hands-on support for organic growers.

Sustainability is a holistic endeavor. Environmentally, it’s about taking care of the planet. Socially, it means helping the communities we touch flourish. Economically, it means turning a profit so we can continue to get food to people while supporting growers who do it right.

Success in these efforts is possible only through committed partnerships throughout the supply chain.

We’re delighted to have a new store in Burien, extending our co-op’s presence further south and west, in the Five Corners Shopping Center at 15840 1st Ave. South. It includes beautiful green building features and is the area’s first certified organic grocer.