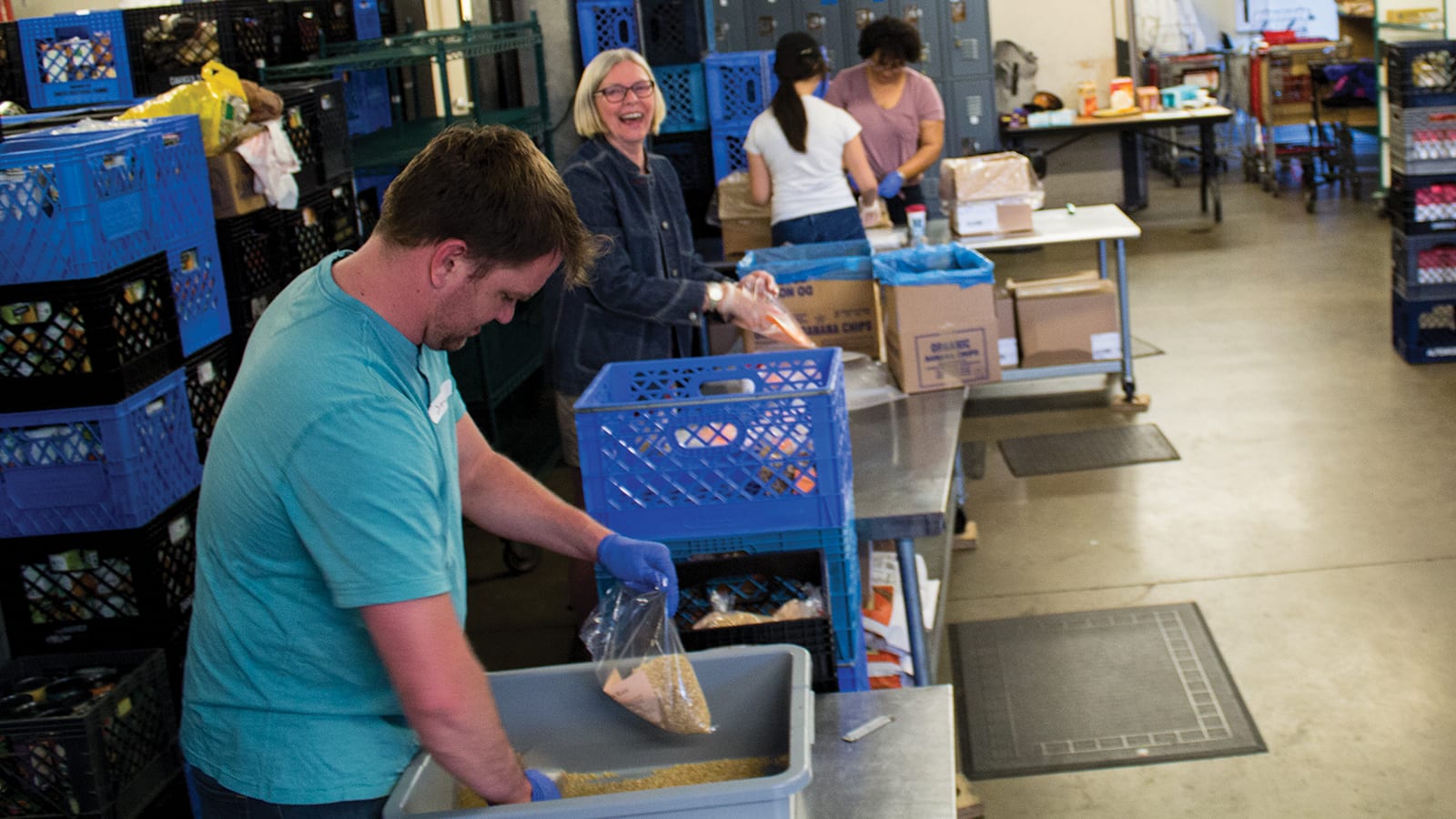 You can donate anytime to PCC’s food bank program. Just tell your cashier or give online.

As the nation’s largest community-owned food market, PCC is unlike other businesses held accountable to private shareholders. We’re owned by and accountable to the community and share a commitment to social and environmental issues, as well as economics.

Twenty-five years ago, PCC staff asked, how could we improve access to nutritious food for the most vulnerable in our communities? How could we help feed the underserved? The result in 1989 was Cash for the Hungry, the beginning of what has become PCC’s Food Bank Program.

“The way PCC partners with food banks is unique and needed,” says Kathryn Sander, PCC’s Community Relations Program Manager. “It’s a challenging issue. Our mission is to support these food banks in a way that is socially and culturally responsible so they don’t become stressed beyond capacity.”

We are grateful to our community of PCC shoppers who are the backbone of the bulk food buying program. One hundred percent of all funds donated during in-store food drives, plus the money generated by shoppers reusing carryout bags, goes directly to the food banks in food or cash. None is used for administrative costs.

To maximize the purchasing power of donations, PCC negotiated with food service companies to create a list of nutrient-dense foods that each food bank can select from six times per year, according to the needs of those they serve. Mike Cox, Food Bank Manager of FamilyWorks, explains why this is unique.

“PCC’s food dovetails nicely with hunger justice and supplying proper nutrition, as opposed to empty calories,” says Cox. “The last thing we should be doing is contributing to an individual’s health problems by offering poor diet choices.”

Lauren Laing, Hopelink Redmond Food Bank Coordinator adds, “This purchasing program helps keep our store shelves stocked with essential dry goods. Being able to tailor our order from a list of choices is beneficial because not all food banks need the same staples.”

To package pallets of bulk food into family-sized portions for distribution, PCC sends staff and recruits volunteers through a nonprofit called SeattleWorks.

Sander views staff involvement as a great way to engage staff in the community and demonstrate that our co-op is more than just a store selling groceries.

Mike Hatada, Manager of the Issaquah Food and Clothing Bank, says, “Of all our donors, PCC is the only store that contributes to our efforts by donating both food and time.”

Food banks rescue food that’s edible but no longer at peak from each PCC store, every day. This includes food from the grocery, produce and deli departments and, occasionally, meat and health and beauty items.

“We use ‘rescued’ food for our no-cook program, providing an instant meal for the homeless who don’t have the facilities to store or cook food,” says Miguel Jimenez, Rainier Valley Food Bank’s Development and Communications Manager.

Cox of FamilyWorks points out the high quality of fresh food from PCC and its foods for special diets, such as vegan, gluten-free and low-sugar, are very beneficial to food bank patrons with specific cultural or dietary health needs, such as diabetes or heart disease.

Universally, every food bank voiced a desire and need for healthier foods — more produce and raw nuts — and staples, such as butter, cheese, milk, condiments and oil, flour and sugar for baking.

The homeless represent fewer than 10 percent of those who frequent food banks.

“Any one of our relatives, friends and neighbors may need our services,” explains Laing of Hopelink.

“You can be a single mother who fled a domestic violence situation with no money,” she says. “Or someone who traveled here for a promised job only to find out the company went bust. Or, someone on a fixed income who can’t afford the increased property taxes to keep the roof over their head. Or you’re caught between jobs without medical insurance and face an impossible medical bill. The majority are hardworking individuals barely making ends meet.”

At the Issaquah Food and Clothing Bank, Executive Director Cori Walters reports 60 percent of those they serve are senior citizens on a fixed income, or children.

“Of the 3,390 individuals we served in our food bank in 2017, only 150 self-identified as being homeless,” says Walters. “The majority are employed with one or two jobs supporting the household. We’ve seen a growing need among college students.”

Jeremy Kay, North Helpline’s Food Bank Manager, also reports more than 25 percent of the people served are older than 55, and 25 percent are younger than 18, with approximately 27 different languages spoken. Their fastest-growing populations are seniors and individuals experiencing homelessness.

State data show nearly 40,000 students were homeless during the 2015-2016 school year, a 12 percent increase from the year before, according to The Stranger. In the Seattle metro area, one in nine children lives in poverty, despite our region’s growing wealth.

With home prices soaring, many are stuck as long-term renters, unable to save enough for a home down payment while coping with higher rent bills. The standard definition of “affordable” is spending no more than 30 percent of income on housing, yet households increasingly are spending 50 percent or more, making them “severely cost-burdened.”

Rent hikes in greater Seattle have grown six times faster than the national average over the last year, according to Zillow. In the last six years, rents climbed 57 percent, costing the average renter an extra $635/month.

Working in the busiest and most culturally diverse food bank in Seattle, Rainier Valley’s Jimenez reports they distribute close to 110,000 pounds of food per month and receive more than 220,000 requests annually for food.

“We’ve seen a 105 percent increase over the last five years,” says Jimenez. “Few businesses must cope with a 20 percent increase in demand every year, year after year, without resources to compensate.”

“The solution is not more pounds of food to meet the need,” says Jimenez. “That’s the wrong way of looking at the problem. Listening is a good start. Living wages and affordable housing are the broader issues.”

“Food banks are one step in addressing poverty. The full solution to individuals facing scarcity will require a multi-pronged approach involving better education, nutrition and healthcare,” adds Cox of FamilyWorks. “Until the day that poverty is fully addressed, we’ll be here increasing the nutritional health of our community, preventing homelessness, and providing a supportive community where people can meet life’s challenges.”

PCC alone cannot solve the void in social responsibility for feeding our nation’s people. But as Sander observes, “Food banks are more holistic than I imagined, providing social and community services above and beyond food. We’re committed to holistic solutions, not just through food banks, but also programs that empower people with limited resources.” We’ll tell you about those in a future issue of Sound Consumer.

OGC has been PC’s primary organic produce supplier because its produce tastes amazing and because we treasure OGC’s commitment to a values-based supply chain. This essay highlights the organic and sustainable practices in place and profiles some of OGC’s signature farmers.

We’re delighted to have a new store in Burien, extending our co-op’s presence further south and west, in the Five Corners Shopping Center at 15840 1st Ave. South. It includes beautiful green building features and is the area’s first certified organic grocer.