This article was originally published in April 2018 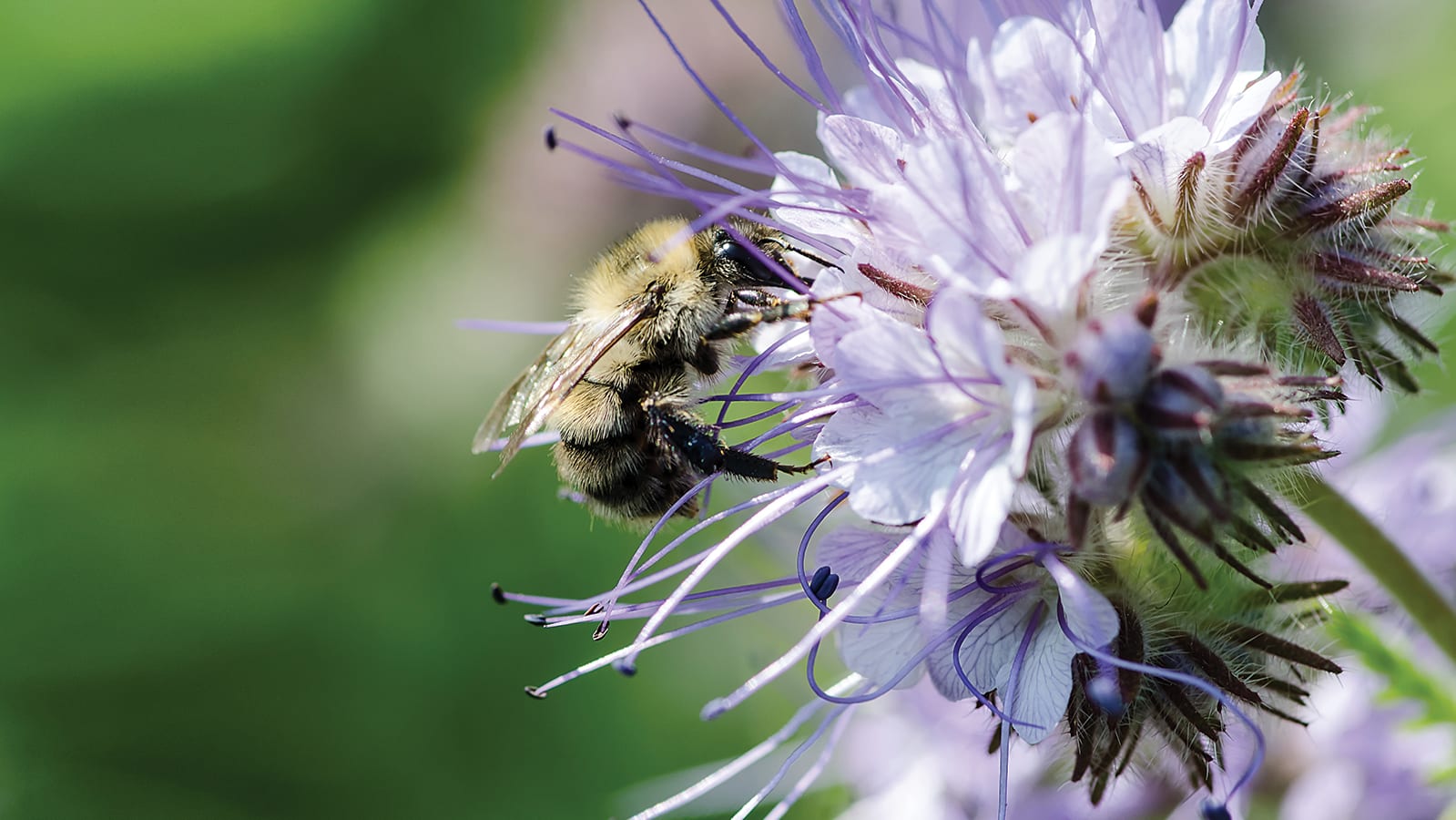 When we consider what it takes to grow food, we see that these small, multi-legged creatures play an essential role.

Increasingly for a lot of farmers and food companies, the next frontier in food sustainability is small. Insects (and their kin, such as spiders) are not what most of us immediately think of when we consider what it takes to grow food. Yet when we look closely, we see that these small, multi-legged creatures play an essential role in bringing food to our table.

The importance of insects is most obvious when we consider the role of pollinators, which contribute to production of crops as diverse as avocados, almonds, apples, canola, chocolate, coffee and pumpkins, as well as a huge range of things we typically feed to livestock, such as alfalfa and clover. Based on current estimates, pollinators — such as bees — are responsible for about one of every three bites of food or drink that we consume.

Beyond just pollinators, however, insects and other invertebrates help build healthy soils by breaking down and recycling organic matter, making it available to plants. They sequester carbon by moving organic matter into the soil — often at a massive and largely overlooked global scale. Insects are food for other wildlife, such as salmon and songbirds.

Interestingly, insects are also the most abundant source of crop protection available to farmers. While a tiny fraction of the world’s insect species are agricultural pests (less than 2 percent), thousands of species of beneficial predator insects prey upon pests, such as aphids and slugs, in some cases providing all the natural pest control needed on a farm.

In my role at the Xerces Society for Invertebrate Conservation, I work with an incredible team of ecologists to educate the public about insects and their link in food production, and to support farmers who want to increase beneficial insects to enhance crop production.

Partnerships behind the scenes

In recent years, our work increasingly has touched the lives of millions of people around the world, including most folks who shop at PCC, while remaining very much behind the scenes. In partnership with major food brands such as Annie’s, Cascadian Farm, Muir Glen, Cheerios, Häagen-Dazs, Silk and others, we have been working across tens of thousands of acres of farmland to restore habitat for pollinators and other beneficial insects, and to help farmers reduce the use of insecticides.

Typically, the habitat we restore takes the form of long linear hedgerows consisting of native flowering shrubs along fence lines, or native wildflower meadows planted on the edges of crop fields. In some cases, we even work directly within the crop, planting flowering cover crops in the understory of almond orchards for example. The result of these efforts is beautiful. Often these farm edges explode with color and buzz with insect and songbird activity during the growing season. They are also functional.
An extensive body of research now clearly demonstrates that these types of habitat features have direct benefits to adjacent crops.

Among these recent findings, University of California researchers demonstrated that when about 30 percent of the landscape surrounding a pollinator-dependent crop is maintained in natural habitat, those crops can get all their pollination needs met by the native wild bees that are supported by that habitat. To put it more simply, natural habitat provides wild pollinators to nearby crops.

Similarly, researchers in the United States and Europe repeatedly have documented a similar effect on other beneficial insects, with some research showing that farms with about 20 percent of their land as natural habitat typically have measurable levels of natural pest suppression throughout crop fields, thanks to great numbers of beneficial insects. This concept of natural pest management is now well-established in some crop sectors.

For example, fresh bagged lettuce mixes produced in California often are grown in fields near extensive habitat plantings, allowing much of that industry to phase out insecticides. The lettuce industry has been one of the most successful models for what insecticide-free farming can look like.

To support this insect-friendly farming model, a number of incentives are appearing. Among these are cost-sharing funds offered by the U.S. Department of Agriculture's (USDA) Natural Resources Conservation Service to farmers for the creation of habitat features such as hedgerows. Under these cost-sharing programs, qualifying farms typically can receive 50 percent of the funding needed to create pollinator habitat, making the process much less expensive and easier to adopt.

Other incentives are working to reward conservation-focused farmers by differentiating them in the marketplace. Among these is Bee Better Certified (beebettercertified.org), a first of its kind farm and food product certification launched by the Xerces Society and organic certifier Oregon Tilth. Like other certification programs focused on fair trade, non-GMO ingredients, or environmental issues, Bee Better has a robust set of standards required for certification and third-party oversight with farm-level inspections to ensure farms meet the requirements. This relatively new program, which celebrates farms creating habitat and reducing pesticide use, complements other standards, such as certified organic, and provides consumers a direct way to support farms that support bees.

What we can do now

As promising as these developments are, there is still much work to be done. Within the U.S. our understanding of insect populations continues to paint a grim picture. Of our 46 species of wild bumblebees, we believe 25 percent of them are now directly at risk of extinction.

The Monarch butterfly, another iconic and formerly common North American insect, has declined in numbers by about 90 percent over the past 20 years. The picture globally is even more stark. Scientists in Germany last year published insect survey results from nature reserves in Western Europe over the past 20 years, showing a 76 percent decline in insect numbers. When insects cannot survive in nature reserves, the situation is clearly bad.

Fortunately, there are things every single person can do. In addition to supporting farms and food companies that are working to protect beneficial insects, there are effective steps we can take in our communities.

The primary factors impacting beneficial insects, such as loss of habitat and pesticide use, can be tackled in our own yards, gardens and urban greenspaces. Planting native plants, especially native wildflower meadow plants, is one of the most important steps we can take.

Whether in a community garden, a parking strip or backyard planter box, establishing native wildflowers, such as camas, springbank clover, Puget gumweed, big leaf lupine, Oregon phacelia and meadow checkermallow, can support a huge range of wild bees, butterflies and other beneficial species. Even better, if you have a yard, consider turning part of it into a full wildflower meadow. Non-native plants, such as lavender, hum with bees, but the diversity of species they attract is relatively low. Native wildflowers in contrast can support hundreds of species of insects, even in small urban spaces. Once you create these habitats, it’s essential to protect them from pesticides.

Fortunately, just like farms that restore habitat for beneficial insects, these features typically turn the balance against pests. This makes native wildflowers not just beautiful but also a good way to help reduce aphid populations in your garden. Who would have thought that some beautiful wildflowers and the bugs they attract could be the secret to food security?

Founded in 1971 and named after the extinct Xerces blue butterfly (the first butterfly to go extinct in the United States due to habitat loss), the Xerces Society is often thought of as a sort of Audubon Society for insects. We have a growing nationwide organization of people working on diverse conservation programs to protect rare and at-risk species overlooked in traditional wildlife conservation programs. We have a team working on pesticide policy and reform issues, and folks who focus on water quality protection for aquatic species. My team works primarily on sustainable agriculture issues, especially pollinator conservation on farms. For more information, visit xerces.org.

Eric Lee-Mäder is the Pollinator Conservation Co-Director for the Xerces Society for Invertebrate Conservation.

Gardens for the bees

I used to think of my work as growing organic food for humans. These days I prefer to consider the whole effort as growing food for bees. Feeding humans is an incidental perk.