by Dana Perls and Eli Penberthy

This article was originally published in February 2017 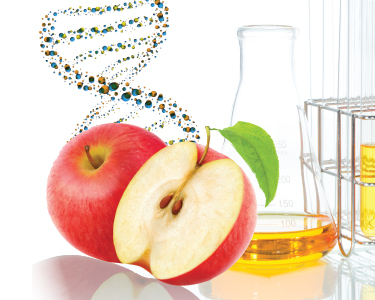 New, experimental genetic engineering techniques are altering food and other products while racing ahead of regulations. What are the consequences and will they be allowed in organics?

Genetically engineered (GE) ingredients have been hiding in food for 20 years, but they recently have been changing. Corporations are tampering with agriculture in new and riskier ways.

Genetic engineers now can do more than they ever could: change a species by deleting genes, or turn genes on or off. They even can create wholly new DNA sequences on a computer. This is a new field of GE known as synthetic biology or GMOs 2.0.

Increasingly, genetic engineers are investing in GMOs 2.0 with hopes of further engineering agricultural products and processes. For example, synthetic biologists can produce artificial compounds that taste or smell like familiar substances but don’t come from the natural source.

A suite of gene editing techniques is being used to develop new GE crops, animals, insects and pharmaceuticals. According to the National Academy of Sciences, the risks of these new biotechnologies are not assessed for their potential impacts. Current safety assessments are insufficient or in some cases don’t exist.

The products of these new technologies already are in food and cosmetics but aren’t labeled — and may be marketed as “natural.”

The NOP is struggling to keep up with how rapidly these new GE technologies are entering the supply chain.

More than 20 years ago, the NOSB established a definition of GE under the U.S. Department of Agriculture (USDA). According to that longstanding definition, GE methods include cell fusion, microencapsulation and macroencapsulation, and recombinant DNA technology (including gene deletion, gene doubling, introducing a foreign gene, and changing the positions of genes when achieved by recombinant DNA technology). None of these methods are allowed in organic food production.

That 1995 definition provided adequate guidance to exclude the use of the most common GE crops today, such as herbicide-tolerant corn, soybeans and Bt cotton. But over the last several years, the new GE techniques made it necessary for the NOSB to revisit the definition.

At its fall 2016 meeting, the NOSB approved a proposal that includes a set of definitions for today’s known GE methods. It unanimously recommended USDA approve its Terminology Chart, which clarifies specific techniques that currently are excluded methods in organic production. It also proposed multiple definitions to encompass all future technologies instead of trying to create one comprehensive definition. This chart can be updated on a regular basis as new technologies come online. At its next meeting the NOSB will discuss a number of new technologies and decide if they will be excluded from organics.

In general, organic advocacy groups applauded the NOSB’s progress, saying expanding the list of excluded methods will ensure that ingredients derived from new GE techniques will not be allowed in organics.

“The NOSB took an important step forward by unanimously adopting this proposal,” says Abby Youngblood, executive director of the National Organic Coalition. “The proposal represents the organic community’s collective best attempt at a comprehensive framework to protect organic from novel and untested new genetic techniques. We need USDA to make this unanimous NOSB recommendation official by creating formal guidance on this issue.”

Sound Consumer first reported on synthetic biology in 2014, when vanilla created by synthetic biology was set to enter the market in ice cream, lotions and more. Synthetic biology vanilla was the first major application in food of this new GE technology. Since then, other foods and ingredients have been developed.

Synthetic biology stevia, called EverSweet, may be sold as “natural” and “sustainable,” or labeled with vague biotech promotion, such as “fermentation derived.”

Gene-edited canola oil is another example of a GMO 2.0. A small section of DNA changes the canola plant to tolerate pesticides.

Gene-silenced apples, approved for sale in the United States and Canada, have a gene “turned off” so the apples won’t turn brown when cut.

A gene-silenced potato engineered not to turn brown when exposed to air and to produce lower levels of acrylamide (a carcinogen) when fried or baked, is on the market.

These new GMOs are just the beginning. Many are in development: glow-in-the-dark weeds, probiotic yogurt made with engineered bacteria and other microorganisms made with GE bacteria intended to change gut bacteria, engineered probiotics for pets that make dog droppings smell like bananas, and cow’s milk made from synthetically engineered yeast (no cows involved).

Companies are pushing synthetic biology products onto the market without knowing the impact on consumers, farmers or the environment.

“When you alter the genetics of living things they don’t always behave as you expect,” says Michael Hansen, PhD, senior scientist at Consumers Union.

That’s concerning given that the government requires virtually no safety assessments to ensure the safety of GMOs. Industry consultations with regulators are voluntary, and industry can present summaries of their data, not the raw data for scrutiny. Under U.S. law, products or ingredients from synthetic biology don’t have to be labeled.

Furthermore, while companies claim GMOs 2.0 are the solution for sustainability, many current synthetic biology products depend on sugar from chemical-intensive monocultures or other polluting feed stocks, such as fracked gas. GMOs 2.0, such as engineered algae, could escape into the environment and become “living pollution.”

The future of food?

For decades, the public has been promised that GMOs would end hunger and reduce pesticide use — yet hunger persists at high rates and toxic pesticide use has soared with herbicide-resistant GE crops. Today we’re hearing the same promises, plus new ones — that GMOs 2.0 will combat climate change and decrease agricultural pressure on land. As in the past, these promises are not backed by evidence.

Consumers Union’s Hansen says, “There’s global agreement in the World Agriculture Report that industrial agriculture and genetic engineering are not the answer for the future of food. Biotechnology by its very nature is focusing on one or a few genes or specific traits, whereas truly ecological agriculture is focused on whole systems. That’s the direction consumers want and where we need to go for health and sustainability.”

Hansen joined a group of 300 scientists, academics and MDs to issue a joint statement titled, “No Scientific Consensus on GMO Safety.” They concluded decisions about whether to expand the introduction of GE crops and foods “should be supported by strong scientific evidence on the long-term safety for human and animal health and the environment, obtained in a manner that’s honest, ethical, rigorous, independent and transparent.”

As consumers, the best way to avoid GMOs 2.0 is to buy organic and ask food and cosmetics companies if their products are synthetic-biology-free.

Friends of the Earth and other NGOs are working at the federal and international levels to establish a regulatory framework for synthetic biology. They’re calling for no release or commercial use of synthetic organisms until appropriate regulations and safety assessments are in place.

Keep informed of the latest developments in synthetic biology and take action at www.synbiowatch.org.

Dana Perls is the senior food and technology campaigner at Friends of the Earth. Eli Penberthy is editor of Sound Consumer.

Face milks clean skin without soaps and harsh detergents and are gentler than foaming or gel cleansers. Here's a roundup of some of our favorite brands, why we love them, and how they're used most effectively.

PCC Board of Trustees report, February 2017

Board meeting report, Get to know your trustees, Contact the Board of Trustees

Receive Sound Consumer in your inbox

Soon PCC will be offering Sound Consumer articles by email. Every month we'll round up a mix of our best features, recipes, news bites and letters in an e-newsletter, along with other great content. Sign up.