Go with the flow?

This article was originally published in January 2017 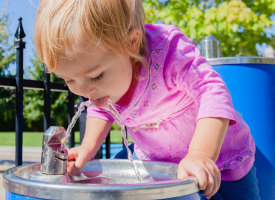 Forgive yourself for not obsessing about our drinking water quality. Through a confluence of planning and gifts from nature, Seattle-area residents are blessed with high-quality water.

Even so, problems can crop up from time to time, as they did in Seattle in the early 2000s and in Tacoma this year. Staying informed about water quality issues is wise, what with drinking water problems regularly in the news.

Tracking the results of mandated municipal water testing arms you with knowledge. And if you’re concerned about the water quality in your home or business, say regional experts, there are simple steps to address the problem.

How good is our water?

The water delivered by Seattle Public Utilities to Seattle residents and most people in surrounding suburbs and towns — 1.3 million people — meets or exceeds federal standards for drinking water.

Our good report card starts with the source: Seattle’s water comes from the Cedar River Watershed and South Fork Tolt River Watershed. “Seattle is unique and fortunate with the supply that we have here,” says Wylie Harper, Drinking Water Quality manager for Seattle Public Utilities.

Situated in the Cascade foothills in East King County, the heavily forested watershed acreage is owned by the city and closely protected, with human activity severely limited. The watersheds are fed by rivers, rainfall and snowmelt. Collected water is screened for debris, then sent through a series of treatments for potential conditions or contaminants.

James points to steps taken relatively recently to enhance our water. “We have treatment facilities in place now that weren’t there 35 years ago,” he explains. New treatment plants opened in 2001 and 2004 that helped solve problems. These included exceeding EPA’s allowable lead levels, presence of the harmful Cryptosporidium organism, and high levels of chlorination byproducts. More recently, authorities covered all the city’s open reservoirs to protect from urban environmental contamination.

Surface water must be screened for debris removal and then treated for microbial contaminants, such as bacteria and viruses. A combination of chlorine, ozone and ultraviolet light treatments kill contaminants. Further, our water is supplemented with lime to adjust the pH and prevent corrosion in pipes. This last step is to minimize lead leaching in older plumbing systems.

Getting the lead out

Reading about the extreme problem with lead faced by Flint, Michigan, may cause worry about lead in the water. Required annual reports from our area water providers show lead at levels well below EPA’s allowable level of 15 parts per billion (ppb) for 90 percent of samples, the required metric. Seattle’s last testing showed 3 ppb.

Lead detected at the tap doesn’t necessarily come from the water supply, say experts. Often, the culprit is old plumbing, from which lead can leach into water. “Gooseneck” connectors that once were used by utilities to link the water main to a home’s supply line contained lead for flexibility. Seattle estimates that 2,000 lead gooseneck fittings are in place and is replacing them as they are located, or when they fail.

A more likely source of lead comes from home plumbing. Lead solder was used to connect copper pipes, although limited by building codes in the 1980s and the federal Safe Water Drinking Act in 1986, which set a 0.2 percent allowable lead content.

But lead has been a component in fixtures, such as faucets and water fountains. They’re typically made of brass and brass can contain a small amount of lead. The Reduction of Lead in Drinking Water Act that took effect in 2014 greatly reduced the allowable lead levels in plumbing fixtures, from 8 percent to .25 percent for surfaces in contact with potable water.

Public buildings, especially schools, are the subject of closer lead monitoring and recent actions. Seattle’s schools began an extensive repiping and drinking water replacement program after 2004 testing showed that 23 percent of the school water sources exceeded EPA’s allowable lead level, which at the time was 20 ppb, and 37 percent failed the more stringent 10 ppb standard self-imposed by the school system. In 2007 1.5 percent of sources still exceeded EPA levels, while 4.4 percent exceeded the schools’ own standards. Those numbers have continued to improve with subsequent testing.

“They were very aggressive in dealing with it,” says Dr. Scott Meschke, professor in Environmental and Occupational Health Sciences at the University of Washington. The schools brought in bottled water and replaced fixtures with ultra-low-lead brass ones. “It was a very expensive success story,” he says. “They did everything they could.”

The city of Portland is grappling with a broader lead problem. Ongoing testing of residential water has again shown lead levels above the federal limit, the second time in three years, prompting the Oregon Health Authority to order the city to devise an action plan and take immediate steps.

Lead is a neurotoxin that’s especially harmful to children and pregnant women, according to the Centers for Disease Control (CDC), which says there is no safe blood lead level for children. The CDC estimates 4 million American households have a problem with lead in water and a half-million children have a high enough lead level to warrant health actions.

Banning lead from paint and gasoline were major advances, notes the DOH’s James. Banning lead solder and lowering lead levels in fixtures continues the trend. But if you live in a home constructed before 1980, you can have your water tested for lead (see Washington Department of Ecology’s website at ecy.wa.gov for accredited labs). You can get a water filter that removes lead (look for filters certified by NSF International). You can replace the fixtures. You can buy bulk filtered water at PCC (see sidebar).

The simplest action is to “let the water run until you notice a temperature change,” says James. Flushing out the standing water is “exceptionally effective” at removing lead that has leached from pipes, agrees Seattle’s Harper.

Other water treatment activities can, while effectively combatting harmful substances, potentially also cause problems. Chlorination is done to kill bacteria and other pathogens, but when the chlorine comes in contact with organic matter in the water, harmful “disinfection byproducts” can be formed. These byproducts have been shown to be mutagenic and carcinogenic. The amount of chlorination and other factors affect how much and what type of these byproducts are formed.

“I think there’s still a fair amount of work to be done to understand them,” says UW’s Meschke. He notes, “there are a number of other products” in this arena that are not yet regulated.

Preventing these substances from occurring at harmful levels is a “balancing act,” says Seattle’s Harper. Since those substances take time to develop, water age is monitored and chlorine amounts are adjusted to meet the EPA’s threshold. Collecting samples from multiple locations tracks levels based on how long it takes water to flow through the system. “They don’t form spontaneously, but take hours or days,” Harper says. The formula must be adjusted seasonally to account for water temperature and varying levels of organic matter in the water.

Meschke says that risking the formation of these substances is necessary. “It’s better to kill the bugs than not.”

While EPA has set allowable levels for a number of contaminants, the agency also has mandated water suppliers monitor and report on new contaminants that Seattle’s annual report describes as “contaminants that do not have defined health-based standards.” Seattle found measurable levels of five unregulated contaminants but tested for 23 more listed by EPA that weren’t detectable in its water.

Some of those contaminants are known as perfluorinated compounds (PFCs) and are being studied by Toxic-Free Future (TFF) as “chemicals of concern.” These are “actually complex mixtures of chemicals that degrade into more toxic chemical compounds,” explains Erika Schreder, TFF’s science director. PFCs have been linked to cancers, birth defects, immune system damage and other ailments.

Two PFC chemicals, perfluorooctanoic acid (PFOA) and perfluoroctanesulfonic acid (PFOS), were found in area water supplies in recent years, in Issaquah and Dupont, and at Joint Base Lewis McCord. Issaquah blended water to bring down the levels and installed a filter that was successful, says James. JBLM’s contaminated wells do not serve residential areas.

“These PFCs are just starting to come out from under the radar,” James says. State departments of health and ecology are in a one-to-two-year study on the appropriate response and a chemical action plan.

One problem with such chemicals is that they aren’t just contaminants in water. “We have other exposures to them as well,” Schreder says. PFCs are in hundreds of products. They’re in Scotchgard and Gore-tex and were used in Teflon coatings for nonstick cookware. They’re used in food wrappers and parchment to prevent food from sticking to them.

“We have a concern about any ongoing exposure to these chemicals,” says Schreder. “They persist in our bodies. The half-life of PFOs is about seven years in our bodies.” She notes that EPA recently lowered its advisory level, “but it’s still higher than what scientists have recommended.”

While new and emerging chemicals may get the attention, one substance that has been added to area water supplies for many years continues to grab some headlines: fluoride.

Seattle has been fluoridating its water since 1968, which to some residents is controversial. Overall in Washington, two-thirds of residents are served by a system that fluoridates, while in Oregon that number is less than one-quarter.

Opponents of water fluoridation might be encouraged to know that the fluoridation level recently dropped. The federal Department of Health and Human Services recommended a level of 0.7 milligrams per liter for fluoride in drinking water and the state Board of Health adopted that level and set it into effect in May 2016.

With the efforts to protect our precious source water in watersheds, rivers and wells, and treatment practices that include a bevy of technical processes and chemical treatments, how, on balance, are we doing? Are new and evolving exposures becoming threats? Are regulators doing enough to keep our water safe?

The answer, for many, might be as simple as reading their utility’s annual water quality report and counting the green check-marks that show that we’re within federally mandated levels. For others, installing a certified water filter may be prudent.

For some, measured assurances by experts in the field may help alleviate worry.

“I think we have very good water here,” says Dr. Meschke of UW.

“My perception of risk,” says James of the DOH, “suggests to me that clearly in our large municipal supplies, our risks are low.”

Many PCC customers bring in one, three or five-gallon bottles and fill them at PCC’s self-serve stations with Custom Pure filtered water.

Water quality is monitored and filters are changed as often as once a week, depending on volume processed, to ensure purity.

Letters to the editor, January 2017

PCC Board of Trustees report, January 2017