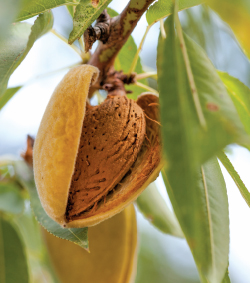 The price of California almonds paid to farmers has dropped about 20 percent since late 2014 due to oversupply. When the price rose from around $2.50 three years ago to more than $4 per pound in 2014, many farmers replaced their lower-priced crops, such as grapes or cotton, with fields of almonds, flooding the market. Also, the strength of the dollar in 2015 meant it cost more for China and India to buy almonds, so they’re buying less.

A Fuji apple genetically engineered to resist turning brown could be on U.S. tables sometime this year. Okanagan Specialty Fruits of B.C. has petitioned the U.S. Department of Agriculture (USDA) to deregulate sales of its Arctic Fuji. Two other of the company’s non-browning varieties — the Arctic Golden and Arctic Granny — were approved last year by USDA for commercial sale.

2015 was a great year for ag tech start-ups. Despite a nationwide drop in farm income, investments in young ag tech companies jumped from $2.6 billion in 2014 to $4.6 billion.

The Environmental Defense Fund is introducing a “habitat exchange” to protect monarch butterflies. Landowners, farmers and ranchers get paid either by corporations or government agencies that need to mitigate their impact to wildlife, or by organizations and individuals interested in protecting monarch habitat. EDF is hoping the effort will keep the monarch off the Endangered Species List.

Demand for bison meat is on the rise. A few decades ago, there were only about 30,000 bison left in the United States. Today, there are closer to 500,000. Bison meat can bring in twice as much money as beef.

Saturday, April 23: All PCC stores will host displays, special guests, product and cooking demos — and PCC food, of course — We'll share with members and shoppers the many ways PCC partners with local organizations and vendors in our communities.

PCC members have the opportunity to support our co-op by voting in our annual election between April 13 and May 23. They'll vote for a new board of trustees, a new nominating committee, and a proposed set of of amended bylaws.