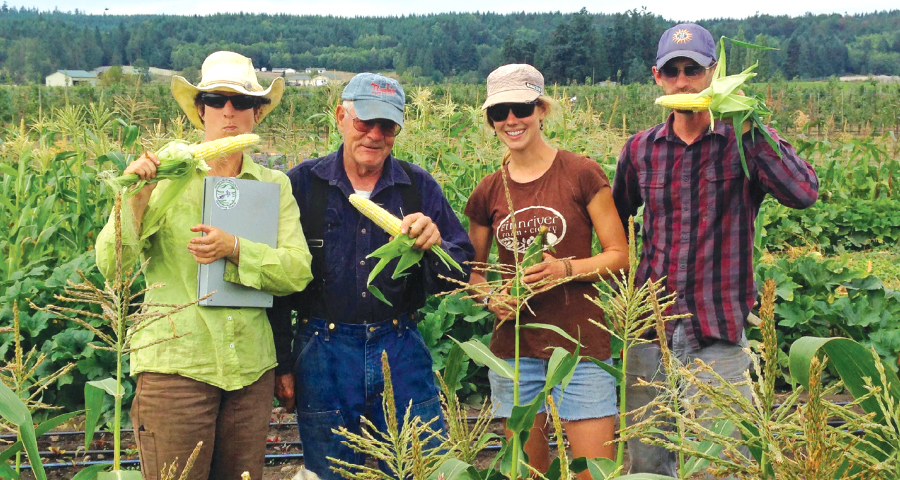 A plant-breeding team of farmers and researchers walked Nash Huber’s extensive purple cabbage fields in winter 2014. Carrying flags on stakes across the farm’s chilly Sequim acres, they were tagging the best specimens, selecting from two varieties to be crossbred. The new variety will hold high hopes. “Our goal is for it to be cold-hardy, delicious, beautiful and vigorous,” says Laurie McKenzie, research and education associate for Port Townsend-based Organic Seed Alliance (OSA).

Last December, they made the walk again, surveying the new crop grown from that seed and, again, McKenzie dug up the best plants to work with in OSA’s greenhouses, which sped up the biennial plant’s flowering stage. She monitored the cross-pollination, then harvested the seed to get it back to Huber for more farm trials.

In the near future, PCC shoppers could be hefting the new, locally adapted organic cabbage into their carts. Not to mention organic corn, purple sprouting broccoli and other crops. Locally adapted spinach and carrots are on the shelves already.

But the small band of collaborating farmers and researchers grapples with challenges: most commercial seed has not been developed for organic farming practices or our region’s climate and cool soil. So pests, diseases and field conditions — not to mention cross-pollination from undesirable or genetically engineered varieties on adjacent land — are studied closely.

Power to the farmer

Localized organic plant breeding is a growing response to unwelcome farming trends. An OSA report shows an increase in organic seed research to $22 million over the last five years, compared to $9 million for the five years previous.

“It gives the grower the opportunity to have control over their seed source,” explains Huber. “Right now the control is with the multinational corporations, and their focus is not what’s best for us or our customers.” Not only do farmers participate in the breeding, but the resulting varieties are open-pollinated, which means they will breed true to type and farmers can save, regrow and adjust them further to local conditions.

For OSA, putting that power into farmers’ hands is the path to proper stewardship of genetic seed resources, core to its mission, explains Micaela Colley, OSA executive director. Breeding programs provide “seed well-suited to the environment or farming system that helps a farmer succeed.” The OSA program teaches farmers how to grow their own seed, and research partnerships utilize the farmer’s expertise.

“Farmer participation is very valuable because they understand their system better than anyone does,” she says. “Farmers drive what we’re breeding and what the desired traits or qualities coming out of that breeding will be.”

Huber hails the partnership as a way to speed up the process that can take a corporate seed company up to 15 years.

“We’re out there in the field every day and we see changes and can adjust our breeding program right away,” he says. “With global warming, that’s really important.”

Another high hurdle is that commercial seed companies are not focusing on organic.

“Organic farmers are a stakeholder group that’s been neglected for many years” by seed companies, says Dr. Jim Myers, professor of horticulture at Oregon State University in Corvallis.

Breeding new varieties once was the purview of land-grant universities but not anymore, says Myers. “There has been a decline in public plant breeding,” he says. “Universities have been reducing these positions.”

By collaborating, research grants can be sought by various partners and the work spread to where it’s most appropriate. Huber, whose local Nantes carrot variety is so sweet some at PCC call it “carrot candy,” says he has a dozen breeding projects going each year and the partnership “gives me access to people who have knowledge of genetics and access to resources I don’t have.”

For instance, OSA’s McKenzie tended nearly 100 cabbage plants through their flowering and pollination stages, selecting the best and studying the shortcomings. “They wouldn’t have the time or effort on the farm to do this,” she says.

Larger collaborations extend the work. For instance, the Northern Organic Vegetable Improvement Collaborative (NOVIC) involves researchers at four universities. It includes Washington State University and Oregon State University, as well as OSA and farmers in multiple states, to participate in breeding and trials of new varieties.

The programs even extend internationally. One partner, Dr. Bill Tracy at the University of Wisconsin-Madison, has winter nurseries in Argentina where crops can be grown in our off-season, thus “allowing us to do two full cycles of breeding in one year,” says McKenzie.

The trials may be far-flung, but regional and organic adaptations are the goals. “There are some fundamental differences in how plants obtain their nutrients in an organic system compared to conventional,” explains Myers.

“Our focus here on organics is how we build fertility into the soil, how we manage the soil, and how we grow the plants,” says Huber. “We strive for plants that can take care of themselves and respond to conditions in the field. They’re being bred for those qualities.”

One desirable trait might be a plant’s “interaction with the soil biomes,” says McKenzie. If a conventional farmer is delivering “a continuous and available supply of synthetic nitrogen, [the plant] loses its ability to have a relationship with the naturally available rhizobia bacteria, and it stops doing that.”

Another trait might be weed competition. Since weeding is done by hand or machine on an organic farm instead of pesticides, an organic farmer would benefit from a variety that emerges robustly and quickly creates a canopy to shade out weeds. Adapting varieties for such traits is cutting edge work, says McKenzie

Genetics that impact nutrition, taste and flavor also are goals, says Myers. “Evaluation of taste, quality and flavor have come out of the NOVIC program, where we’re engaging chefs and farmers in our evaluations.”

“Much of the flavor in the brassicas is due to glucosinolates they contain,” he says. “Glucosinolates have multiple functions: pest and disease resistance, unique flavors, and health benefits associated with them. Purple sprouting broccoli, in particular, is going to be fairly high in carotenoids and precursors to vitamin A. Breeding for plants with darker color can enhance human nutrition.”

A grant from the Washington State Department of Agriculture put OSA on the path to find a crop that would be harvestable January to March, a time when virtually nothing comes out of local fields. Two storage crops, onions and cabbage, were studied, as were two field crops, chicory and purple sprouting broccoli.

Purple sprouting broccoli is showing commercial promise. PCC’s main produce distributor, Organically Grown Company (OCG), offered encouragement and criteria. OGC desired a crop with uniform floret size and shoot length, a juicy stem, and two months of production (needed to coax consumers into trying it and then coming back for more). OGC is sponsoring large-scale trials and OSA is developing it on smaller plots at OSA’s home farm in Chimacum. A stable variety could be growing commercially in two or three years.

Spinach growers also have a new variety well-suited to our climate, thanks to another OSA collaborative breeding project: Abundant Bloomsdale spinach. A cross between the heirloom Winter Bloomsdale and hybrid Evergreen, the new variety is cold-hardy, disease-resistant and adapted to organic growing conditions. Its development was funded by OSA, the Port Townsend Food Co-op and Seed Matters as a project of the Clif Bar Family Foundation. Abundant Bloomsdale is providing another benefit: a new farm income stream, as farmer-partners are now growing it commercially for seed.

Regional adaptation of seeds is not unique to organics. But in these days of consolidated corporate seed operations, one of the only places it’s occurring is on the organic farm, with the help of collaborating researchers and benefactors.

The interest in traditionally bred new varieties and growing reverence for remaining heirloom varieties also has sprouted a crop of new regional seed companies. It’s a trend consumers will see at the seed rack and benefit from in the produce aisle.

A tiny grain that packs a big protein wallop is in trials for western Washington agriculture.

Quinoa, an ancient crop from the same family as spinach that originated in the South American Andes, is being tested by Washington State University (WSU) researchers on the Olympic Peninsula and in the Palouse.

The WSU team, under lead researcher Dr. Kevin Murphy, has been trialing seed from the U.S. Department of Agriculture seed bank in Pullman and from lines developed at Brigham Young University. They found the peninsula climate can produce taller plants with larger seed heads in a rainbow of colors. But those seeds also can succumb to moisture and sprout prior to harvest.

Researchers also grapple with a weighty issue: honoring the need for Andean farmers to maintain control of their legacy subsistence crop. The livelihood of these traditional stewards is threatened as quinoa’s popularity rises.

A systematic review of more than 100 studies comparing organic and conventional farming finds that organic crop yields are higher than previously thought.

Saturday, April 23: All PCC stores will host displays, special guests, product and cooking demos — and PCC food, of course — We'll share with members and shoppers the many ways PCC partners with local organizations and vendors in our communities.