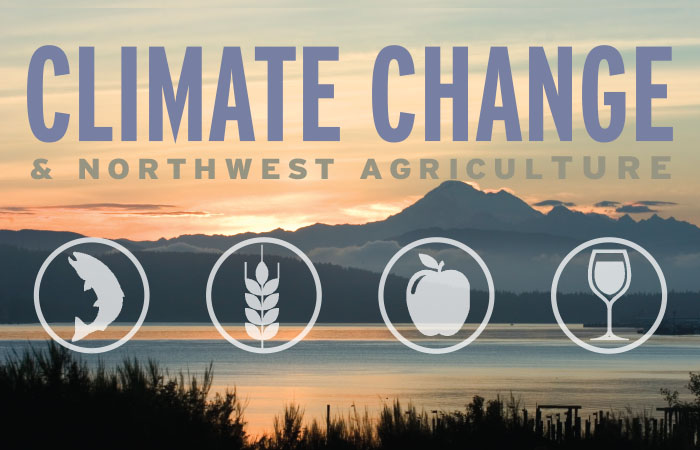 Apples, wheat, wine and salmon — what would Washington be without them? Let’s hope we never have to find out.

It can be hard to remember, here on the wet side of the Cascade Curtain, in the hotbed of high tech, but Washington relies on agriculture for 12 percent of its economy, some $40 billion per year. Disruptions to this sector of our state’s economic engine could be disastrous, and climate change seems certain to take a toll.

Thinking about scientists’ climate change projections for Washington over the rest of this century can keep you up at night. They predict: higher temperatures leading to earlier spring runoff and subsequent summer water shortages; a surge in pests and weeds resulting in greater use of pesticides and herbicides; flooding in low-lying areas and declining crop and livestock yields with higher production costs; increased likelihood of severe storms and wildfires; warming water conditions affecting salmon migration and algae blooms; and increasing ocean acidification, threatening shellfish survival.

Yet the Northwest may adapt better than other regions.

“One of the biggest issues that impacts agriculture in Washington is the availability of water for our crops,” says Bill Warren, a Dayton, Wash., farmer. Warren farms 4,000 acres together with his two brothers, primarily wheat, barley, peas, fruit, hay and livestock. He worries that “with climate change we’re looking at increased spring runoff and the need for increased water storage. We’re a dryland farming area and moisture is incredibly important. We want to be sure that any rainfall we get stays in the field; we don’t want any erosion. Water is the biggest issue and it’s not one that can be solved easily or cheaply.”

He has good reason to worry. Our summer precipitation is projected to decrease by 30 percent by the end of the century. Warming temperatures also are projected to hasten and increase spring snow melt, so that it may occur as much as three to four weeks earlier by mid-century (compared to 20th century averages) resulting in reduced water flows during the hot summer months when crops and livestock need water most.

Temperatures also are projected to increase at a rate of 0.5° F per decade through the middle of this century. This has a host of ramifications in addition to its effects on water availability: changes in plant growth patterns, the creation of conditions favorable to insect pests not previously seen here, blights such as powdery mildew of grapes and cherry leafspot, increased weed germination and growth, and heat stress on livestock, among others.

Rick Small is the director of production at Woodward Canyon Winery in Lowden. His family has been farming the Walla Walla Valley for generations. He believes he already is noticing climate change effects. “I don’t know that I ever can remember when it was hotter,” he says. “We’re planting on higher elevations and moving new plantings away from south slopes, putting some varieties on higher, north-facing slopes, to mitigate the impact of that sun beating down on them so directly.”

Then there are the bugs. Of all the pests in Washington, apple codling moths are the worst in terms of insecticide application per acre. Warming patterns are projected to cause them to emerge earlier and live longer, necessitating additional spraying of the fruit. Apples are also an irrigated crop and yields will diminish in areas where irrigation water is not available.

There is, however, some indication that in areas with sufficient irrigation, water apple crop yields actually may increase as a result of increased carbon in the atmosphere. The same may be true for other crops.

Species migration is another outcome of warmer temperatures globally. As warming occurs, animals and plants (including weeds and pests) move to higher altitudes and latitudes in search of a more favorable habitat. Warmer and wetter winters also will favor earlier germination and growth of weeds. According to the Climate Change Impacts Group at the University of Washington, Washington farmers will face more, and different, threats to crops than historically have been seen here.

Changes in precipitation patterns and rising temperatures also are likely to bring severe storms: fields may flood, drowning crops and increasing the likelihood of root diseases. Planting times may be delayed, increased agricultural runoff may affect streams and rivers, and where storms bring lightning, wildfires may rage across parched land.

Not least there are the effects on the seafood ecosystems. Early snow melt and rushing spring waters may wash out salmon spawning areas, along with their incubating eggs. Lower stream flows in summer and warming waters may interrupt the traditional life cycle of these fish. It’s projected that by 2100 salmon may lose up to one-third of their habitat as a result of warming temperatures.

As the atmospheric load of carbon increases in conjunction with rising temperatures, much of this carbon is absorbed by the oceans, leading to acidification of the waters and the demise of shellfish.

“In a world where CO2 concentration is increasing steadily, thanks to us, the ocean is changing and getting into more problems that we are having to grapple with just to grow things we eat,” says Brad Warren, Director of the Global Ocean Health Program of the Sustainable Fisheries Partnership.

It’s important to note that agriculture not only is affected by climate change, it also contributes to it. Tilling releases stored carbon from the soil into the atmosphere and nitrous oxide enters the atmosphere from fertilizer use, as well as methane from livestock production. These gases all contribute to climate change. It’s estimated that 20 to 30 percent of all climate change-causing emissions come from agricultural sources worldwide, although the figure for the United States is much lower, at about 9 percent in 2012.

There are certainly things that farmers can do to reduce this impact. Such measures include reduced or no tillage to keep carbon in the soil and out of the atmosphere; increasing the amount of carbon in the soil by using organic soil amendments; recovering nutrients from organic waste for use as fertilizer; reducing nitrous oxide emissions from fertilizer manufacturing and application by using precision application methods in the field; reduced use of fossil fuels by using advanced farming equipment; and recovering methane from the decomposition of livestock waste.

“Organic agriculture provides management practices that can help farmers adapt to climate change through strengthening agro-ecosystems, diversifying crop and livestock production, and building farmers’ knowledge base to best prevent and confront changes in climate,” according to the United Nation’s Food and Agriculture Organization (FAO). It also says organic agriculture makes better use of renewable resources.

“Many field trials worldwide show that organic fertilization compared to mineral fertilization is increasing soil organic carbon and thus, sequestering large amounts of CO2 from the atmosphere to the soil,” says FAO. “Lower greenhouse gas emissions for crop production and enhanced carbon sequestration, coupled with additional benefits of biodiversity and other environmental services, makes organic agriculture a farming method with many advantages and considerable potential for mitigating and adapting to climate change.”

The good news is that in Washington we have an assortment of diverse microclimates and grow more than 300 commodity crops, so we do have some ability to adapt to a changing climate. Some crops can acclimate to increased temperatures and humidity. Some areas will be affected less than others as water availability lessens. Some areas are less vulnerable to extreme weather events.

“Warmer winters, longer frost-free periods, and relatively unchanged or increased winter precipitation could be beneficial,” according to the U.S. Global Change Research Program.

Higher carbon dioxide levels in the atmosphere actually may boost the productivity of certain crops (apples, wheat, potatoes, fruit trees). But although the impacts of climate change on Washington agriculture are projected to be relatively mild over the next two decades, problems are expected to become more severe after that.

We can expect that drought and reduced access to irrigation water, flooding of low-lying areas, temperatures that exceed the tolerance of some of our traditional crops, along with the insect pests and plant diseases that will thrive in a warmer climate, all will have a negative impact on the lives of farmers and the wallets of consumers.

Rick Small, speaking about how Washington winemakers might adapt, says, “We can switch to different varieties, different clones, and different root stocks, we can experiment with that. I think we can manage, and still be able to make wines, but I don’t think they’ll be as interesting.”

Farmer Bill Warren sums it up nicely. “I think everybody in agriculture is looking at trying to reduce their carbon footprint. Defining our sustainability and trying to be good stewards of the land and the conservation of our precious resources is of utmost priority.”

Learn how to choose what oils are best suited for specific cooking techniques or are best when used raw.