Bhutan could become the first country in the world to go 100-percent organic in its food production, according to officials from the tiny Bhuddist nation. It’s part of the country’s decision to measure and improve Gross National Happiness rather than Gross Domestic Product when evaluating its success.

Environmental well-being, economic well-being and healthfulness all are crucial to happiness, according to Bhutanese thinking. Converting the country to organic agriculture helps meet those tenets.

“I don’t think it’s going to be that difficult given that the majority of the agricultural land is already organic by default,” Andre Leu, an advisor to the Bhutanese government and the president of the International Federation of Organic Agriculture Movements told NPR. Already, 70 percent of farming in Bhutan is organic.

NPR reports the synthetic chemicals and fertilizers that are used widely in developed countries, such as the United States, are available and affordable to only a small percentage of Bhutan’s farmers.

Pema Gyamtsho, Bhutanese Minister of Agriculture and Forests, says bringing the organic plan to fruition within the next several years will depend on ample investment in agriculture research and support for farmers to make the transition.

He told The Guardian newspaper that Bhutan is experimenting with different methods of growing crops, planning to increase the amount of irrigated land, and using traditional varieties of crops that don’t require inputs and have pest resistance. 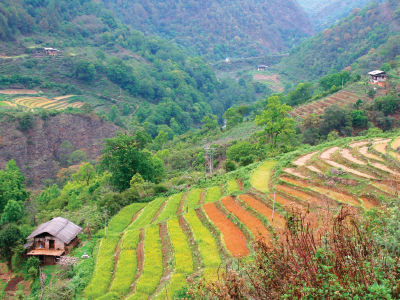 Gyamtsho says he’s seeing a trend of farmers recognizing the benefits of growing organically, and the pitfalls of not growing organically. Many now see non-organic agriculture “destroys the soil and its water retention capacity so unless they increase the input year by year, they’re not getting the kind of returns that they were getting earlier,” he told The Guardian.

He also says a prohibition against synthetic chemicals and pesticides would open up markets in China and India, Bhutan’s neighbors to the north and south. Only about 1 percent of China’s arable acres now are farmed organically, but demand for organic is growing, fueled by a rising upper class with disposable income and frequent food-poisoning scandals.

That’s not to say exporting Bhutan’s organic products will come without challenges.

One obstacle to reaching the 100-percent-organic goal is that a solid supply chain and market for organic products must be established. Currently most of the country’s farming is subsistence farming.

Another challenge is the lack of organic certification capacity within the country. The first testing laboratory opened only recently, The Guardian reports.

But agriculture secretary Gyamtsho seems undeterred. He says Bhutan’s emergence as an organic leader should start regionally — the country’s farmers should grow organic food to supply regional markets that don’t need the same level of third-party oversight that buyers in Europe and the United States require.

Yet Gyamtsho doesn’t dismiss the importance of certification. He says as Bhutan’s testing capacity grows, certification will be “a very important requirement not just for the export market but also for our people as they need to know what they’re eating.”

Whether Bhutan’s organics benefit mostly its own citizens or increasingly are exported abroad, the country’s mission could set a powerful example to the world for how governments can drive a paradigm shift toward eradicating harmful chemicals and building a sustainable agriculture system.

“Hopefully we can provide solutions,” said Gyamtsho in an interview. “What is at stake is the future. We need governments who can make bold decisions now rather than later.”

This article was compiled from wire reports.

Joel Preston Smith is a writer and photographer living in Portland. Eli Penberthy is editor of the Sound Consumer.

Letters to the editor, September 2014

Take a minute to send a letter to EPA urging it to move forward to protect Bristol Bay, home of one of the world's largest wild salmon runs, from proposed mining.

Purchase GloryBee honey — available in jars and bulk — on sale this month at PCC. A portion of sales go to research aimed at solving Colony Collapse Disorder.