This article was originally published in November 2013 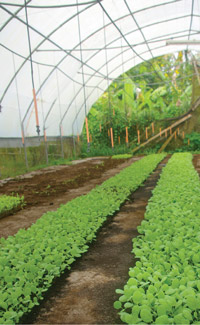 Sales of organic foods grew by 25 percent between 2008 and 2011, despite the economic downturn in much of the world during that period. Worldwide sales of organic food and drink totaled $63 billion in 2011, the latest year recorded. In the United States, organic products account for 4 percent of all food and drink sales. Organic farming is practiced in 162 countries on 92 million acres.

It was a record year for Columbia River fall chinook. Numbers already were close to beating the previous record set 10 years ago even before the season ended this fall.

A group of Seattle gardeners is trying to find out what effects the bumblebee decline might have in our backyards. They’re taking part in the Urban Pollination Project, a citizen science experiment started by two University of Washington graduate researchers that will assess how important bumblebees are for pollinating the food grown in urban gardens.

Commercial salmon fishing in Alaska hit a new harvest high in 2013, with a record 266 million fish delivered through the first half of September, exceeding the previous record of 221.9 million salmon caught in 2005.

Algal blooms are on the rise in Northwest waters, posing an increased risk for people who eat shellfish. Fertilizer and nutrient runoff into waterways causes the blooms. Some types of algae can release toxins, which poison shellfish and the people who eat it.

Approval for the use of arsenic-based drugs in animal feed is being withdrawn by the Food and Drug Administration. Arsenic-containing compounds have been fed to poultry to induce weight gain since the 1940s.

The shared meal is no small thing: it is a foundation of family life, the place where our children learn the art of conversation and acquire the habits of civilization: sharing, listening, taking turns navigating differences, arguing without offending.

For the growing number of people avoiding grains, refined sugar and dairy, the holiday months can be difficult. But it's possible to make delicious baked goods with alternatives — think almond and coconut flour in place of all-purpose white flour, and coconut oil in place of butter.