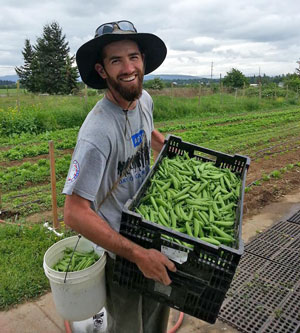 Chris Brown is the director of Growing Veterans, a nonprofit that helps connect returning veterans to local farms.

When Seattle native Chris Brown, a U.S. Marine combat veteran of Iraq and Afghanistan, returned from multiple tours of service, it was vegetable gardening that healed some of the tender wounds he brought home with him.

It turns out being elbow-deep in rich soil, nurturing young plants, can be a surprisingly curative and powerful force. And not just for Brown.

Veterans across the country have been flowing home from overseas service and are finding their feet in farming.

That shared revelation could be good news for the estimated 1.5 million service members expected to leave the military in the next several years, and is potentially good news for those worried about just where our next generation of farmers will sprout.

For 27-year-old Brown, Washington state’s sustainably minded vibe dovetailed with some of the veteran issues he’d been focusing on at Western Washington University -— issues such as unemployment, suicide and homelessness.

“I was talking to veteran friends and it just clicked,” he says. “We have unique experiences we bring to the table. Veterans, in general, have a solid work ethic. They’re good at working in teams. They can both take on leadership roles or be a regular member of the team. Those skills transfer to agriculture.”

Today, Brown is the director of Growing Veterans, a nonprofit that helps connect returning veterans to local farms, and to a sense of community. The organization is turning the farm into a platform to get local veterans engaged, even if that first connection is simply pulling weeds or harvesting produce.

“You don’t have to farm to get involved with us. Veterans can test the waters to see if there’s something they’re interested in doing. Maybe that’s marketing or accounting, or writing articles about work, farming or their transition home,” says Brown.

A way to engage

“We’re trying to get veterans involved in the community as a whole. Issues such as unemployment, suicide and homelessness, those stem from isolation,” he continues. “If you have PTSD, you isolate yourselves from friends and family. We want to get them together to break that cycle, to engage in the community and at the same time, show the value that veterans can bring to the table,” he says.

It’s a goal that resonates with many others. When navy veteran Mike Hackett returned from 14 months of service during the Vietnam war, he too said it was farming that kept him “on the rails.”

“I worked with a number of veterans who were learning to farm,” says Hackett, now 66 years old. “It was quite a long time ago, but it shaped my whole life experience after that, and I’ve been farming part-time ever since.”

“Veterans farming is something that goes back to World War II,” he continues. “But returning Vietnam vets didn’t have that support. I don’t want that to happen to any other generation of vets.”

Today, Hackett is on the executive board for Tilth Producers of Washington and is eager to help veterans who come his way. While there’s no formal, funded program in place, Hackett says he has applied for funding for a farmer veteran training program that he hopes eventually will blossom into a more formalized program at Tilth.

Deston Denniston with Vets Cafe says there’s no single organization in Washington that’s directly leading vets to farming on a broad scale, but says there are vibrant pockets of activity throughout the state doing good work and gaining momentum. The common thread between them? Connecting veterans to the land and helping them heal.

“When you’re on a farm and you’re self-directed, you have an opportunity for introspection,” says Denniston.

There are national organizations looking to transition veterans to farming as well. Take the Farmer Veteran Coalition (FVC), which is expected to hand out $200,000 in microgrants this year. Not only is it supplying the cash to get a veteran growing, but it’s working hand-in-hand with applicants to craft a well-thought-out business plan first. The goal is to fund farming-related ventures that will be successful out of the gate.

Tia Christopher, spokesperson for FVC, says that while the GI Bill can get returning vets back into school, brain injury, PTSD or other physical injuries may put a college degree or traditional 9-to-5 desk job out of reach.

“Forty percent of today’s military are from rural communities, but I’d say an increasing portion are urban too, just as the urban ag movement is growing,” says Christopher. “There are jobs in agriculture. And veterans can contact us to find out more.”

Washington-grown organic, fresh herbs are still in season! Try them in recipes from this issue of the Sound Consumer, or other dishes with early fall produce.