This article was originally published in October 2012 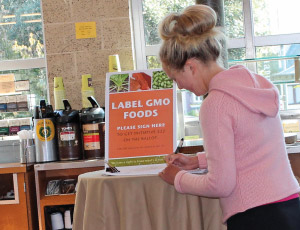 Sign the petition for I-522 at PCC stores by December 31.

You think the odds of getting I-522 on the state ballot to label GMO foods are stacked against us? You’re right.

To get the recommended 320,000 signatures in the time allowed by the state takes money. Hiring professional signature-gathering contractors appears to be essential to get done what volunteers can’t do alone. When time is short and weather is cold and wet, signatures cost $2 each, or more.

Since 2000 in Washington state, the only initiatives that have succeeded in achieving enough signatures to make it on the ballot have had major financial backers, such as Bill Gates (charter schools) or Costco (liquor privatization).

Many of you have called and emailed about the great sums of money raised to defeat the California initiative to label foods with genetically modified organisms (GMOs).

Monsanto alone has donated $4.2 million to fight Prop 37. Almost $5.5 million more came from PepsiCo, Coca-Cola, ConAgra, Kellogg’s, General Mills and Smucker’s. A sampling of your comments is in Letters to the editor (Oct. 2012).

It is a problem that some brands we sell are owned by companies pouring money into defeating Prop 37. But stripping our shelves of these products may not be as obvious an answer as one might assume.

While PCC hasn’t calculated how many items are controlled by these companies, cutting them out would leave many customers without the products they want.

No Cascadian Farm? No Muir Glen? Some shoppers would not like that. Reducing choices by pulling some foundational organic products is not likely to serve members’ interests well.

PCC has preferred to advocate the consumer’s right to an informed choice. Talking about these issues and helping you choose foods you feel comfortable supporting is something we will defend, always.

Here are the companies (and the amounts donated) you’ve asked for:

In November, we’ll tell you about PCC vendors who are stepping up to support our right to know.

I-522 is a grassroots effort, filed by a vegan couple from the Tacoma area who felt someone had to give it a go. They set up a website and support has grown across the state.

Donations of just $10 from thousands of people could make the difference in getting I-522 on the November 2013 ballot. Much of the money that might have supported I-522 already has gone to California; $1.2 million was raised to pay for signatures for its initiative to label GMOs, Prop 37, up for a vote November 6.

PCC is supporting signature-gathering for Washington’s I-522 at all PCC stores and other locations, providing campaign support materials to sister co-ops across the state, from Bellingham to Republic. It’s wonderful to work with other co-ops — and timely — as we celebrate Co-op Month and Non-GMO Month in October.

I-522 is supported by independent grocers, such as Marlene’s Markets in Federal Way and Olympia, student organizations on campuses, small restaurants, vitamin shops, a bookstore and farmer’s markets. It’s supported by conservative communities east of the Cascades, as well as progressive urbanites here on the west side, across party lines.

“The People’s Right to Know Genetically Engineered Food Act,” I-522, is simple. It would require food sold in retail outlets to be labeled if produced through genetic engineering.

Calorie and nutritional information was not required on labels until 1990. Country-of-origin labeling wasn’t required until 2002. The trans fat content of foods didn’t have to be labeled until 2006. These labels are accepted now as important, and consumers use their information every day.

Since the Food and Drug Administration says we must know if our orange juice is fresh or from concentrate, doesn’t it make sense that foods engineered with foreign bacteria, viruses, insect, plant or animal genes should be labeled, too?

Many have bans or other restrictions against GMOs. Some, such as India and Mexico, have bans or labeling in several states.

If California’s Prop 37 passes, it would have a seismic impact nationwide. At press time, polls showed 65 percent of California’s voters supported mandatory GMO labeling, with only 20 percent strongly opposed.

Stacy Malkan, communications director for California’s Prop 37, says “We’re confident this grassroots energy is going to take us to victory in November. Getting Washington’s I-522 on your ballot would send another strong message for labeling.”

A number of conventional U.S. food companies that own some organic brands are pouring money into defeating Prop 37 (see sidebar). Truth is, they’re already complying with mandatory labeling laws around the world. Labeling did not cause market disruption, or chaos in sourcing or distribution. Their business overseas continues to prosper.

Passing I-522 and Prop 37 would give us the transparency these companies already are giving other customers.

I-522 and Prop 37 will give us the transparency we deserve.

Chocolate's good for the heart, skin and even mood — and here's yet another reason to indulge: eating chocolate from responsible companies can support farmers in developing countries around the world.

It's always hard to say goodbye to the luscious berries, cherries and peaches of summer, but true fruit-lovers take heart in one of the jewels of autumn: the lovely apple.

Letters to the editor, October 2012