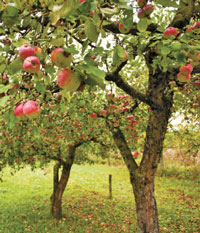 Central Washington’s upcoming fruit tree crops look strong with good bud counts and blooming close to schedule. Meanwhile growers in the Midwest and Eastern part of the country are dealing with freeze damage, which could boost sales and prices of Washington fruit.

Washington asparagus farmers have begun to expand production again after being crushed for decades by cheaper South American imports. Not all asparagus farmers are part of the trend; some were forced to turn up their fields this season due to labor shortages after immigration sweeps in the state. Asparagus is a labor-intensive crop, requiring cutters to harvest stalks by hand.

In Alaska, Copper River fishermen were forecast to catch about 27,000 Chinook this season, more than last year’s catch of about 20,000. Prospects for the Yukon River fishery remain grim after several very poor seasons. Quotas off southeast Alaska and B.C. were reduced.

The Oregon pink shrimp fishery began in April and fishermen are hoping to duplicate last season’s bumper harvest of almost 30,000 tons — more than twice the five-year average. In spite of the big catch, processors say they had no problem moving all their shrimp at relatively strong prices.

West Coast trollers are predicting their best Chinook salmon season since 2005. After severe cutbacks the past few years, salmon caught off the California and southern Oregon coasts will be back up to about 4 million pounds. This follows a very strong spring Chinook run on the Columbia.

PCC Board of Trustees report, June 2012