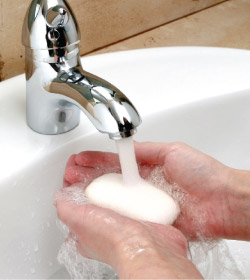 There are safe and effective alternatives to triclosan in products sold at PCC.

PCC has asked the vendors of all our skin, facial and body care products to comply with the standards of the Natural Products Association, a set of guidelines that determine whether a product truly can be called “natural.” These standards include:

Many brands at PCC already comply with these stringent standards. PCC is working with others that are striving to become compliant by reformulating. We have discontinued brands and products that are choosing not to comply.

As a health care professional and periodontist, I deal with making recommendations every day regarding purchase and use of health care products. The guiding principle is to do no harm, while providing effective, proven therapeutic benefits. So I was very pleased when I noticed certain toxic ingredients aren’t in bodycare products sold at PCC.

The ingredients called triclosan, and the related triclocarban, are found in many other cosmetics, toothpastes, shaving gels, deodorants and liquid hand soaps. They may be labeled “antibacterial” or “kills 99.9% of germs.” A 2000 study found triclosan in nearly half of all mainstream liquid or bar soaps.

Triclosan is classified by the Food and Drug Administration as a pesticide. Recent evidence identifies triclosan’s potential for damaging human health, the food chain and the environment.

The Center for Disease Control first reported in 2007 how readily triclosan accumulates in the human body, noting its presence in breast milk and umbilical cord blood. Researchers found triclosan in 75 percent of the U.S. population and it’s estimated that levels increased by more than 41 percent between 2004 and 2006. It is suggested that this bioaccumulation increases with age.

One interesting study of doctors and nurses found the average subject had three times more triclosan in their urine than the general U.S. population; doctors and nurses, of course, use antimicrobial soaps routinely. Triclosan bioaccumulation also was observed in wild dolphins.

Since triclosan accumulates in the body, what impact does this have? Articles in juried publications illustrate that triclosan can alter hormone levels, disrupting puberty and fertility. It’s implicated in neurodevelopmental problems, obesity and cancer. Other investigations link higher concentrations of triclosan with increased diagnoses of allergies or hay fever.

Just as triclosan persists in the body, it also persists in the environment. It has been found in 92 percent of sewage sludge samples across the United States. It degrades very slowly, persisting at low levels for extended periods, at least long enough to get into the food chain and create carcinogens.

It is reported that 100,000 tons of this triclosan-tainted sludge are used annually to fertilize non-organic food crops, such as non-organic soybeans. The root systems absorb the triclosan sludge, allowing accumulation of the pesticide in the beans.

Contaminated sludge and wastewater, exposed to sunlight, results in the breakdown of triclosan into dioxins. Dioxins are identified as members of the “dirty dozen” primary chemical carcinogens. Levels of dioxins in the environment have dropped by as much as 90 percent over the last 30 years, but the levels of triclosan-associated dioxins have increased as much as 300 percent.

Products with triclosan are effective but there are safer alternatives. Regarding soaps containing it, the American Medical Association says, “No data exist to support their efficacy when used in such products, or any need for them … it may be prudent to avoid the use of antimicrobial agents in consumer products …”

Bradley D. Johnson, D.D.S., M.S.D., is a former faculty member at the University of Washington. He’s also a consultant in the dental insurance industry and maintains a periodontal practice in Shoreline. Contact him at greatgumz@frontier.com or 206-546-6808.

Important efforts are underway in Washington state to require labels on genetically engineered (GE) foods. Bills are being introduced in both the state House and Senate with broad support.

Last July, when 16-year-old Nicholas Chavez collapsed in 106º F heat while picking bell peppers, it was hardly national news. The story wasn't covered by CNN, the Associated Press or Fox News. Chavez was just one more pair of hands in the endless stream of bent-backed migrants.