This article was originally published in July 2011 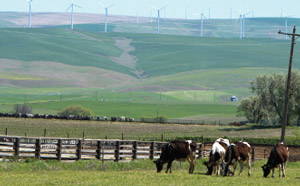 What happens when a story about saving organic farmland isn’t about a small farmer trying to make a go of it, but rather larger growers trying to do the right thing with a bigger stretch of land?

PCC Farmland Trust is saving another farm. But this latest project is different than some of our past work. This is a tale of continuity, on a larger scale, and with timely regional and political relevance.

Ray and Tom Williams, along with their wives Melinda Eden and Penny Hawkins, are the owners of Williams Hudson Bay Farm — located just outside the city of Walla Walla, near the Oregon border in the Walla Walla River Valley. What historically was the Hudson Bay Trading Company’s farm during the mid-1800s now covers more than 3,000 acres of organically certified, Salmon-Safe farmland.

It’s a highly diverse organic operation. Organic wheat, alfalfa seed, barley, beans, corn, onions, and more compose the different panels of a colorful quilt of fields along the rolling slopes of the valley. Red-tailed hawks shriek and circle in the mammoth sky above as organic heifers mosey and chew.

Bright sun, clouds, shadows and wind are the stars of this landscape and the light ignites a neighbor’s bright yellow canola field stretching out into the hilly distance. Rows of wind turbines make up an assertive border on the northern and southern crests.

It always is a good day when farmland is no longer under threat. But in this case, after a year and a half of work, there is special call for celebration. In an area where the overwhelming majority of agriculture is conventional, now at least 300 acres will be organic and protected from development forever. 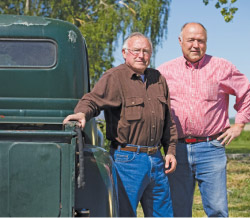 The complexity of the whole farm is remarkable when you visit the property. There is such a diversity of things going on, it’s like conducting a symphony — only with a lot more tractors and irrigation tape. When hitting the occasional sour note of crop failure, weather setback, or stubborn pest, farmers must guide the farm back into a successful crescendo, using cover crops, rotations, good pest management and sheer force of will.

Ray and Tom Williams, the conductors responsible for making all the parts of the farm harmonize, are smart, unassuming and often self-deprecating — not an unusual combination of traits amongst farmers. The two brothers volley good-naturedly back and forth during conversation, correcting each other, finishing one another’s sentences, and talking shop.

A visit with Ray and Tom is equally likely to delve into global socioeconomics, the weather, the latest in sprinkler technology, or the politics of genetically engineered alfalfa.

They are two local boys made good. Starting with a grandfather who was born in Kansas but moved West, the lineage continued with the Williams’ father, Tom Williams Sr., who ran the farm into the mid-1970s, when the acreage count was around 600. Ray and Tom both went away to college — Stanford and Duke, respectively — and returned to the helm of what is now a 3,000 acre organic operation on a tremendous stretch of land on the border of Washington and Oregon.

Williams Hudson Bay Farm is at the southern end of a small region that grows approximately one quarter of our entire nation’s alfalfa seed. Even without the U.S. Department of Agriculture’s disastrous approval of Monsanto’s Roundup Ready genetically engineered alfalfa seed earlier this year, organic alfalfa seed growers face huge challenges — especially in regions where the surrounding crops are conventional.

Alfalfa, as it turns out, is a sage teacher about the inseparability of each strand in the web of life. It can be really difficult to grow alfalfa seed organically, in part because it’s especially vulnerable to some nasty little critters such as aphids and lygus bugs. Like many pests, the lygus and aphids are becoming increasingly resistant to conventional pesticides, leading to increased use of sprays and unintended consequences.

Spraying alfalfa with pesticides also tends to finish off alfalfa’s best friend: bees. Alkali bees and Leaf Cutter bees, to be exact — both are native to the area and integral to alfalfa pollination.

Conventional alfalfa growers increasingly are spraying their fields at night when bees are more protected. Trouble is, other local growers — industrial corn farmers, for instance — spray more indiscriminately without regard to a neighbor’s alfalfa seed production.

Luckily, the Williams live upwind from neighboring conventional farms and work cooperatively to minimize any migration of pesticides. But no one knows exactly how or when GMO alfalfa seed use will affect the area. In the meantime, the Williams use organic methods of pest control on their organic alfalfa plants, with good results. And they certainly don’t wish to disparage conventional growers.

“All farmers appreciate the benefits of healthy soil,” Ray stresses. “But the traditional method of large-scale farming emphasizes volume over quality. We’re looking at growing organic as a smart investment in quality, almost like a trust, where you leave the principle intact and live off the interest.” In this case, soil with more micronutrients, trace minerals, and much better biological activity provides the dividends. 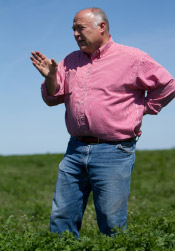 “If we’re smart and have some luck,” he says, “we think we can be competitive.”
Beyond the luck and the smarts lies the Williams’ business acumen. With the commitment to growing organically comes the need to develop strong long-term relationships with customers and distributors.

Williams Hudson Bay Farm is contending with a whole host of issues and hurdles associated with an operation of its size; not just sales but warehousing, distribution and delivery. The Williams are game: they’re rolling with it and getting creative. Their business relationships, by necessity and desire, are every bit as diverse as their crops.

The Williams are part of a growing breed of farmers with their eyes on the longer-term, business-specific benefits of organics. They’re concerned about rising fuel costs, which can reach $7,000 per week across the whole of their property, as well as the need for all farmers to decrease reliance on fertilizers and petroleum.

Crop diversity also provides some very practical insurance, or as Tom puts it, “not putting too many eggs into one genetically modified basket.”

Despite the longer-term benefits that come with growing organically, it’s never an easy road for farmers — big or small. Even with the steeliest of intentions, generations of family farm lineage, land, and enough capital to get going and stay going — farming still is one of the most difficult occupations around.

Tom and Ray Williams have experienced the often steep adjustment of organic certification firsthand. “We refer to that period of time as ‘financial hell’ and the ‘worst of both worlds,’” says Ray Williams, with only a trace of a smile, as he describes the transition between conventional growing and going organic.

“Right when you make the organic commitment is the tough part, because you are in that three-year transition when you’re unable to get an organic premium yet, while also facing increased production cost and still learning the best ways to make all those changes.”

Because of the costs and resources needed to transition, the Williams were weighing their options. Reluctant to sell any portion of the property, Ray and Tom came to PCC Farmland Trust first, to see if there was some way of keeping their entire farm organic.

With the purchase of a conservation easement on part of the farm, PCC Farmland Trust and NRCS were able to help the Williams keep their entire property organic and protect 300 acres in perpetuity. The sale of the development rights also provided the Williams with capital and leverage to incorporate other sustainable practices and upgrades to infrastructure, farm-wide.

Mike Klicker of Northwest Grain Growers says, “As a farmer, I have been amazed at the quality and yields that the Williams have been able to achieve through their organic practices.”

They’re busy working on more upgrades and measures for the future. The plan is to improve and expand manure composting and field application methods, and increase the use of cover crops and crop rotation to enhance soil fertility and health. They’re also in the process of infrastructure improvements to their heifer operation, adding solar panels, and increasing efficiency of water and power use.

PCC Farmland Trust is concentrating on the future of organic farming these days, too. We’re thinking bigger, working faster, and continuing the emphasis on acquiring strategic agricultural organic conservation easements on as much land as we can.

As opportunities to work with different landowners, farmers, and organizations increase, so does the need to prioritize and concentrate on regions most in need of preservation and protection.

In the case of Williams Hudson Bay Farm, we’ve created a relationship with some pretty amazing farmers, who share a commitment and vision to stewarding this unique stretch of organic farmland in Eastern Washington.

To learn more about how you can get involved, visit our website at pccfarmlandtrust.org.

PCC Board of Trustees report, July 2011

Welcome the new board of trustees, PCC election results; Hofford retires from board; Board meeting report