New food safety bill: What will it mean?

This article was originally published in February 2011 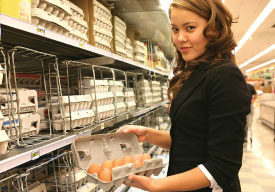 Amid a flurry of activity in the waning hours of the “lame duck” legislative session, the long-awaited Food Safety Modernization Act cleared both houses of Congress before the holidays and was signed into law by President Obama on January 4. The legislation marks the first major overhaul to food safety regulations in nearly a century.

Food safety and family farm advocates now face an uphill battle not only to implement the bill correctly but also to fund it. Leading House Republicans have indicated that they will not support funding for the newly passed legislation, estimated to cost $1.4 billion over five years. Regardless of the level of funding ultimately provided, attention now turns to the Food and Drug Administration (FDA) and the multi-year process of turning the legislation into detailed regulations.

The Food Safety Modernization Act had languished in the Senate for more than a year following House passage of a similar bill in July 2009. It gained steam after several high-profile foodborne illness outbreaks in 2010, including an egg-driven salmonella outbreak that sickened more than 1,600 people in August.

The legislation provides greater regulatory authority to prevent, detect and respond to foodborne illness outbreaks. It gives FDA authority to require mandatory recalls, directs the agency to increase inspections of food production and processing facilities, and improves its ability to trace contaminated food products to the source. The bill also sets new safety standards for fruit and vegetable growers as well as new food safety planning requirements for processors.

Family farm advocates, including the National Sustainable Agriculture Coalition (NSAC), worked hard to secure several amendments to the bills. They allow for size-appropriate alternatives to the one-size-fits-all regulations, which had potential to be economically destructive to small farms and burgeoning local and regional food systems.

The most controversial of these amendments, the Tester-Hagan amendment, provides an alternative food safety planning and recordkeeping process for farms with less than $500,000 in gross sales that sell more than half their products directly to consumers, stores, or restaurants in-state or within 275 miles.

The amendment faced a tough fight in Congress, as many large consumer groups and produce associations with strong ties to legislators strongly opposed exempting small producers from the regulations.

Several other amendments also address the concerns of small producers. They:

These and other NSAC-backed amendments were pivotal to gaining majority support for the measure as a whole.

There’s been some hysteria circulating on the Internet that the bill will be damaging to small-scale producers, but these fears largely are based on misinformation. There is no language that would regulate or shut down farmers markets, outlaw backyard gardening and seed saving, or implement an onerous animal ID-tracking program. The bill also directs FDA to coordinate closely with USDA’s National Organic Program (NOP) on all issues related to organic farming.

It’s important to note the new law deals only with the 80 percent of the food supply overseen by FDA and not meat and poultry products, which are overseen by USDA, not FDA. Bills occasionally have been introduced in Congress to consolidate food safety authority under a single federal agency, but those bills never got off the ground.

The new law is not perfect but it certainly contains important provisions to improve oversight of the industrial food system. Ultimately, of course, that is a food system we hope to see gradually replaced by a more just and sustainable one, and we remain hopeful that implementation of the new measures will not hinder the ongoing development of sustainable farm and food systems.

One factor that went into NSAC’s support for final passage of the bill was the Obama administration’s declared intent to draft new (and very controversial) rules for growing produce and make changes to food processing regulations — whether or not Congress passed a new law. NSAC much prefers having the pro-family farm, local and regional food system, organic and conservation directives and protections written into the law before those regulations get drafted and enacted.

As the President prepared to sign the bill into law, FDA announced its intention to issue new produce regulations within a year, so the clock already is ticking on phase two of this important work.

Emily May is a policy intern at the National Sustainable Agriculture Coalition.

The organic and fair labor/fair trade seals on chocolate offer customers a level of confidence that environmental stewardship and human rights are respected in the making of a product. We’re fortunate to have such systems in place that authenticate the integrity of our foods.

We have thick-grain polenta, one with a finer grind, and some that are already made and packaged, ready to eat. All are organic. So whether you have an hour, 10 minutes, or no time at all to cook, you’ll find this versatile food in a form that will fit your needs — breakfast through dessert!