This article was originally published in January 2011

Getting to know our neighboring nation and its farmers 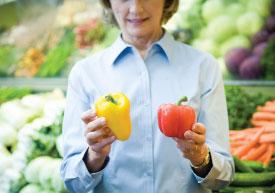 In winter and early spring, while most of our regional farms lie dormant, grocery store produce sections remain well stocked with fresh fruits and vegetables. Much of this vast selection comes from Mexico.

For many shoppers, the Mexican sticker sits like a bold question mark, provoking us with all that we don’t know or understand. How did these fruits and vegetables arrive here? If Mexican produce is labeled organic, how do we know that it is reliably organic? Can we trust that it’s safe to eat? Who produced it, how long ago, and under what conditions?

Anything obscure or unknown can be unsettling, but there are real answers to these questions. The story of the organic sector in Mexico is best told by shining a light on its producers.

The organic foods we import from Mexico can be divided into three categories:

As demand for organic food in the United States expands, Mexico’s certified organic acreage has been growing at a rate of 32 percent per year. A 2009 study found an annual organic production value of more than $370 million with 80 percent destined for export2.

For a food to be sold as certified organic in the United States — whether grown in the United States, in Mexico, or anywhere else in the world — it must meet all the requirements of the U.S. Department of Agriculture (USDA) National Organic Program. It must be produced without the use of toxic synthetic pesticides, artificial fertilizers, sewage sludge, genetically modified organisms, or irradiation.

Perhaps most important, it must be certified by a USDA-accredited agency. Certification includes inspection of farm fields and processing facilities, detailed record keeping of what inputs were applied to the land, and, if there’s cause for concern, soil and water testing. Currently, at least 15 organic certification agencies operate in Mexico3.

The National Organic Program (NOP) has been enforced since October 2002, when the United States implemented the Organic Food Production Act. In February 2006, the Mexican government published its own Law of Organic Products and is issuing regulations soon4.

The credibility of the certified USDA organic label stems from ongoing oversight that can and has penalized lawbreakers. On-farm audits and regular border inspections are vital components of organic certification and food safety testing.

“Sometimes I get the feeling that people don’t know that the National Organic Program exists,” says Alejandro Madrigal. Madrigal works for Covilli, an organic farm his family runs in Sonora State, just south of the U.S. border. Covilli grows produce from mid-November through May, including green beans, Brussels sprouts, eggplants, hot peppers, melons and more, all for export.

Madrigal tells me about a visit he took to a food co-op in southern Oregon several summers ago. When he asked customers for their questions, one woman asked point blank, “Do Mexican growers really use human feces?”

“I blushed,” recalls Madrigal, reliving the experience. “I was surprised that people don’t seem to realize that we are subject to the same regulations.”

Covilli has taken food safety precautions very seriously. The farm is certified organic and for food safety by Primus Labs, a company based in Santa Maria, Calif., with offices throughout North and South America. It conducts microbiological testing for E.coli and salmonella and chemical testing for pesticides.

The Del Cabos Cooperative provides organic produce to PCC. Here are some of Deli Cabo’s members, who bring us flavorful cherry tomatoes, basil and more. 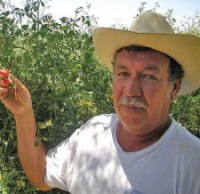 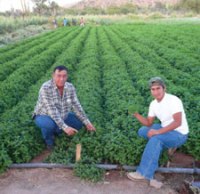 Guillermo Villavicencio and Jorge Ortiz, inspecting a field of mint. 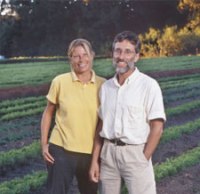 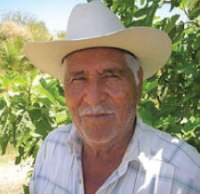 Carlos Burgoin, who recently retired, was one of the original eight farmers in the cooperative.

Joe Hardiman, PCC’s produce buyer, says, “I would have surgery in one of their warehouses. It’s that anatomically clean.”

The USDA has begun more regular and extensive testing at border inspections to combat food safety threats. Most Mexican produce travels to the United States via truck and when a truck is set aside for scrutiny, “you can’t move the product until the lab results return,” which can take days, Madrigal explains. If you have something perishable, such as basil or ripe tomatoes sitting in the heat, the delay can be ruinous. There is significant economic incentive for cleanliness and clear documentation of a product’s origins and chain of custody.

“We work with outfits that have been in business for many years, so they’re not ‘fly-by-night.’ We have a high degree of confidence in them and they’re scrutinized under good certification programs,” states David Lively, co-founder and marketing director of Organically Grown Company (OGC), the Northwest’s largest distributor of fresh organic produce, headquartered in Eugene, Ore.

OGC sources from Mexican producers, including Covilli, to augment its supply and satisfy customer demand. “As a company very committed to supporting our regional agricultural economy, we always will carry a local source when available. As winter comes, we follow produce down to Mexico and then back up,” says Josh Spoden, longtime OGC purchaser.

Mexico is estimated to have more than 110,000 organic farmers, considered the greatest number in any country of the world5. More than 90 percent farm on less than 9 acres and sell their products collectively. On the other end of the spectrum are large, private producers who farm 250 to 5,000 acres6.

An inspiring example of the former is Del Cabo Cooperative, formed in 1987 when two organic farmers from northern California, Larry Jacobs and Sandra Belin, were traveling through Baja, Mexico and came face-to-face with struggling subsistence farmers. The first year, Jacobs struggled to convince just nine farmers to begin the transition to organic production. He offered training in organic growing, harvesting and handling, as well as startup funds. He also developed a distribution channel and marketing program for the products.

Twenty-three years later, the co-op includes roughly 400 members, who make on average $21,000 a year and receive health insurance. Del Cabo’s claim to fame is its flavorful cherry tomatoes and basil, both featured at PCC. All the farms are certified organic by Oregon Tilth and tested for food safety by Primus.

Lively recalls attending a retreat hosted by Del Cabo that brought together Mexican growers and packers with U.S. distributors, marketers and buyers. “We had roundtables and they asked us, ‘What’s your vision for the future of Del Cabo?’

I remember a group of growers had this cardboard box and paint and glue and glitter, and they built a rocket ship taking their produce to Mars.” He chortles at the memory but becomes serious again. “There are real people living down there and we have an opportunity to support them.”

The majority of Mexico’s organic farmers grow for the export market out of necessity. Many farmers have expressed their frustration at the lack of domestic demand for their products, which stems from minimal consumer education and awareness of the higher price. Nonetheless, Lively recalls that the growers he has met convey great pride in what they do and thankfulness for the opportunity.

These stories expose a rarely considered twist: By importing food from Mexican growers who receive a living wage, such as those who sell products recognized as “fair trade,” we’re empowering farmers to remain in their own communities rather than leave home seeking employment. In the United States, at every link in the agricultural chain — from farm to processor to restaurant backend — labor often comes from Mexico.

The USDA reports that more than half the hired workers employed by U.S. produce growers are believed to be unauthorized immigrants. Del Cabo offers its members economic sustenance at home. The increase in certified organic acreage in Mexico also means a safer environment free of persistent, toxic chemicals for workers, families and children living nearby, as well as a roster of organic seeds relevant to their climate.

Resource use in agriculture is a difficult issue that dredges up many factors, from transportation to chemical inputs on non-organic farms to the energy use of greenhouses. Does Mexican produce have a bigger “carbon footprint”? There is no single answer, unless we choose a very specific point of comparison.

There’s an easy case to be made for Mexican avocados. In the United States, avocados are grown in arid areas, and growing them requires a great deal of water. 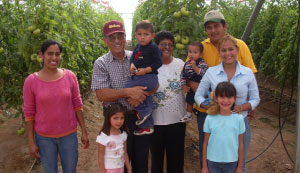 Three generations of the Espinoza family, members of the Del Cabo Cooperative.

“In Mexico, avocados are grown in areas where avocados want to grow,” says Cindy Richter of Pacific Organic Produce, a broker for fruit tree growers. In Michoacán, which exports 90 percent of all avocados from Mexico, only about half the avocado orchards even have irrigation systems because of the abundant rainfall, making them far less resource depleting. Pacific Organic sources from Global Frut, run by the Rivas brothers who coordinate almost a hundred organic growers. “Mexican avocados just can’t be beat,” Richter exclaims.

Not all choices are as straightforward to untangle. Definitely, eating with the seasons and supporting local organic farmers benefits the health of our Pacific Northwest economy, culture and environment. We also hope that shoppers wouldn’t insist on raspberries in January or asparagus in October, despite ample supplies from Mexico.

But anyone who drinks coffee, eats bananas, or wants to cook with a fresh pepper in January knows that food choices are messy, and hunger cannot be choreographed. We are empowered to play an active role in selecting who we support.

If we follow our gut, we might discover that, more than anything, we want the opportunity to look from the produce aisle to the producers themselves, whether they sit near our backdoor or on the other side of a national border.

Like businesses everywhere, PCC has plans for the new year, with strategies for challenges and ideas for improvement — customer service, remodel and upgrade Fremont PCC, explore software to deliver our 10% coupon electronically — and much more!

Letters to the editor, January 2011